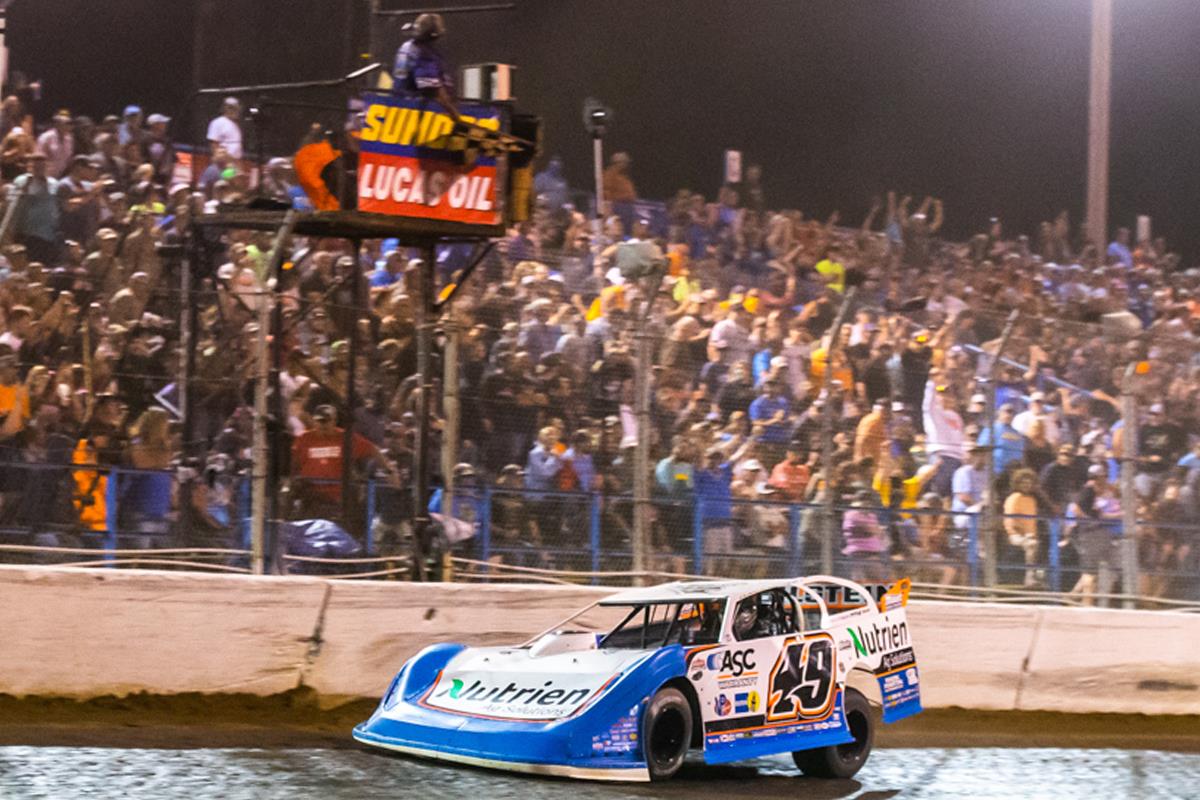 Davenport earned an event record $75,000 for the win to go along with his victory in 2015 in the annual Lucas Oil Late Model Dirt Series-sanctioned event.

Defending race winner Brandon Overton tried to close the gap in the final five laps, coming to within two car lengths of Davenport. However, Davenport would prevail by 1.017 seconds ahead of Overton, who was attempting to become the first back-to-back winner of the crown jewel event since Don O’Neal in 2012 and 2013.

Dale McDowell ran in second for several laps before finishing in third behind his fellow Georgians. Ricky Thornton Jr. was fourth and Mike Marlar completed the top five drivers.

Davenport and Chris Madden who entered the weekend as the first and second-ranked dirt late model drivers in the country (per the DirtonDirt.com Top-25 Poll) started on the front row of the event held before a packed grandstand. Unfortunately, Madden’s night would end before a lap was scored as a broken J-Bar entering turn four eliminated him from the race.

Back underway, Davenport would cruise out to a commanding lead. Lapped traffic came into play as McDowell was closing the gap before a caution on lap 56 cleared traffic for the race leader. On the restart Overton was able to get by McDowell for second, as Davenport was already starting to pull away from the field.

Overton and McDowell slowly started to reel in Davenport as the leader was encountering heavy traffic in the closing laps. Overton began to diamond off turn number two and close the gap down the backstretch. In the last final circuits, Overton appeared to have a shot at stealing the win from Davenport as the crowd rose in anticipation of a close finish. However, Davenport was able to hold his line to cross the finish line for his second straight Lucas Oil Late Model Dirt Series crown-jewel event.

Davenport in Lucas Oil Victory Lane for the 63rd time in his career said: “We just made one adjustment from last night. Our car was pretty good, but we just needed one thing to work on. We talked about it all day and that one little adjustment made the difference. These Longhorn Chassis react to the smallest of adjustments that you make on them. At the end it got so slow and slick. I was trying to smash the gas less and less. I saw 76 [Overton] on the board and I knew he was probably getting closer to me. So, I moved up a lane. We were able to get through lapped traffic good again tonight.”

Overton thought he had a realistic shot if Davenport had not changed his line in the closing laps. “For him not to move, that is what I was hoping for. We were catching lapped cars and I started to move around a little bit. I don’t know if I could gain on him. I could get a better run off two, but he moved up in front of me and then the lapped cars were dirtying the bottom back up. Congrats to him, everything’s going their way. We will just take our second and go home.”

McDowell rounded out the podium in third. “Early on I thought we had shot. I think all of us hit our tough spots during the race, we would go and then fade, go and then fade. We were a little bit tight. Jonathan [Davenport] has had an awesome year and Brandon [Overton] is always good it seems like. It’s fun racing against these young guys and to keep up with them is good.” 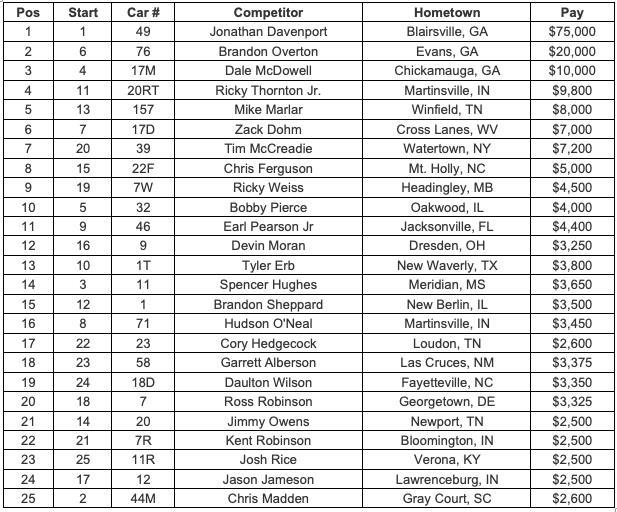