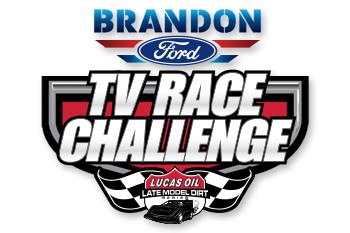 With only four events remaining in the Brandon Ford TV Race Challenge, the tight battle for the $15,000 bonus continues. Tim McCreadie leads the current Brandon Ford TV Race Challenge standings, with Brandon Sheppard trailing by just 95 points. Ricky Thornton Jr. is 105 points out of the lead in third, followed by Earl Pearson Jr. and Jimmy Owens.

The winner of the Brandon Ford TV Race Challenge points category will receive a $15,000 bonus, while second and third will receive $5,000 and $2,000 respectively at the year-end awards banquet. Drivers must maintain perfect attendance with the Lucas Oil Late Model Dirt Series to be eligible for these cash awards.

The MAVTV Motorsports Network is the only cable television network in the U.S. dedicated solely to motorsports. With a total of 220+ providers across cable, satellite, telco, and digital broadcast platforms, MAVTV is now available to more viewers than ever before. For more information visit www.MAVTV.com.

The talent of the nation’s top dirt late model drivers will be put on display along the way, not only during the 18 live events on MAVTV Motorsports Network, but also through the live stream of all Lucas Oil Late Model Dirt Series events via MAVTV on FloRacing.

Brandon Ford, located in Tampa, FL, has won Ford’s prestigious President’s Award for 19 consecutive years, saluting the top-performing Ford and Lincoln dealerships that pursue excellence in the highest levels of customer satisfaction in both sales and service. Brandon Ford has one of the largest inventories of new and pre-owned vehicles in the nation.

Brandon Ford is centrally located just minutes away from the Crosstown, I-75 and I-4. They are located at the corners of State Roads 301 and 60, with entrances at both sides. Their hours are posted on their website for your convenience, as well as contact phone numbers for each of their departments.

To learn more about Brandon Ford or if you are interested in purchasing a vehicle, visit: www.BrandonFord.com.