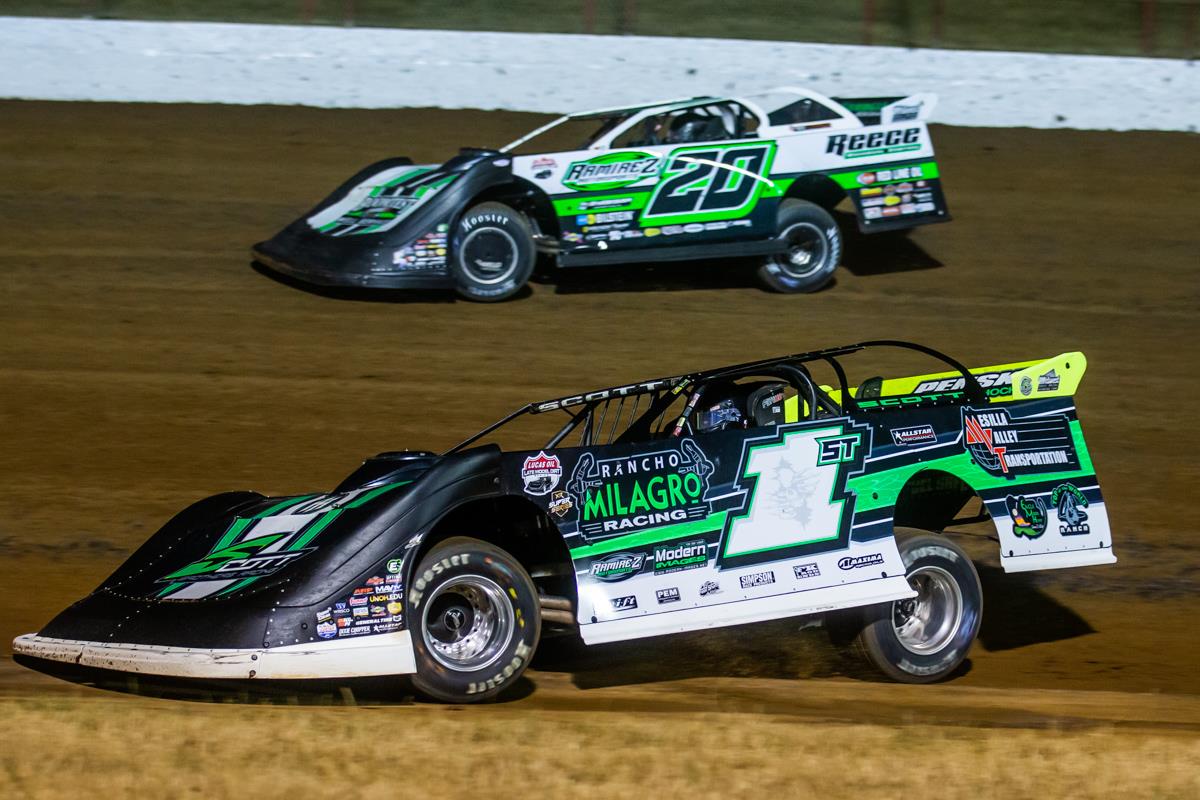 Wheatland, MO (July 16, 2022) – Johnny Scott led all but the first lap in picking up the biggest win of his career on Saturday night at Lucas Oil Speedway. The 32-year-old New Mexico native scored the $15,000 win in the 16th Annual CMH Diamond Nationals. The event was co-sanctioned with the Lucas Oil Late Model Dirt Series and the Lucas Oil MLRA Series.

Scott, who entered the race tied with Chad Simpson atop the MLRA points now stands all alone before the series heads to Moberly, MO on Sunday. The 50-lap main event ran caution-free and took just 14 minutes and 32 seconds to complete.

Jimmy Owens, who has been to victory lane at Lucas Oil Speedway eight times in his career had a shot at Scott in the closing laps but came up just short of his fifth career Diamond Nationals victory. Brandon Sheppard also made a late-race charge to come home in third. Mark Burgtorf in his first appearance this year with the Lucas Oil Late Model Dirt Series finished in fourth followed by pole-sitter Kyle Strickler who was fifth at the finish.

Owens led the first lap before Scott bolted to the lead on the second circuit getting by the four-time Lucas Oil Late Model Dirt Series National Champion. Owens and Strickler had an excellent race for second as those two drivers went back-and-forth for the spot with Owens getting to second in the last six laps of the race.

Owens brought Sheppard with him, rapidly closing in on Scott towards the end of the race. Just as Owens looked like he would have a shot he ran into some difficulty with traffic that forced him to change his line and Scott slipped away from him for the win.

For Scott it was his third win of the season at the “Diamond of Dirt Tracks” and his fifth of the season with the Lucas Oil MLRA Series. “I was just trying to maintain my lead through lapped traffic. I knew I needed to get around those guys and I also knew the top just wasn’t there. I thought if I could run my lines and stay consistent, I thought I could hold them off. I knew they were right there. It worked out for us, thanks to my brother (Stormy Scott) and his crew without them none of this would be possible either; they help me a ton on this car. I am glad we could finally put it all together tonight.”

Owens made up several car lengths in the closing laps coming up just short of his fourth Lucas Oil Late Model Dirt Series win of 2022 as he finished 0.679 seconds behind the race winner. “We were just moving around; the bottom was so dominant all race long. It was really surprising, it’s usually not like that. We were just trying to get around lapped cars and I saw Johnny wasn’t pulling those guys and I couldn’t really pass them. I thought heck I would get up there and try the top, I just got up there about three or four laps too late. Johnny’s been good here the last several times he’s been here. Hats off to those guys they deserve a good win.”

Sheppard with his third-place finish closed the championship points race as he now sits just 100 points behind Tim McCreadie before the Lucas Oil Late Model Dirt Series heads to Huset’s Speedway in Brandon, SD on Tuesday night for the first time. “The track slowed down a lot there at the end. We were able to move out on the racetrack some. It was a solid night for us. I couldn’t ask for much more than that. Obviously we wanted to win. The car was really good hopefully we can keep this momentum going and carry into next week. I am looking forward to coming back, the track was awesome you couldn’t ask for much more than that.” 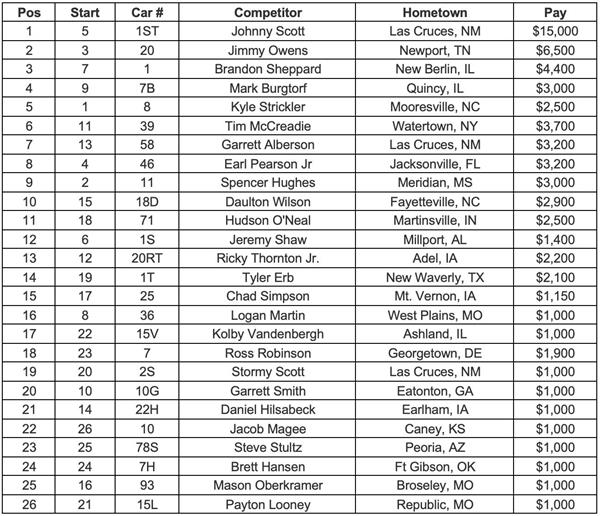