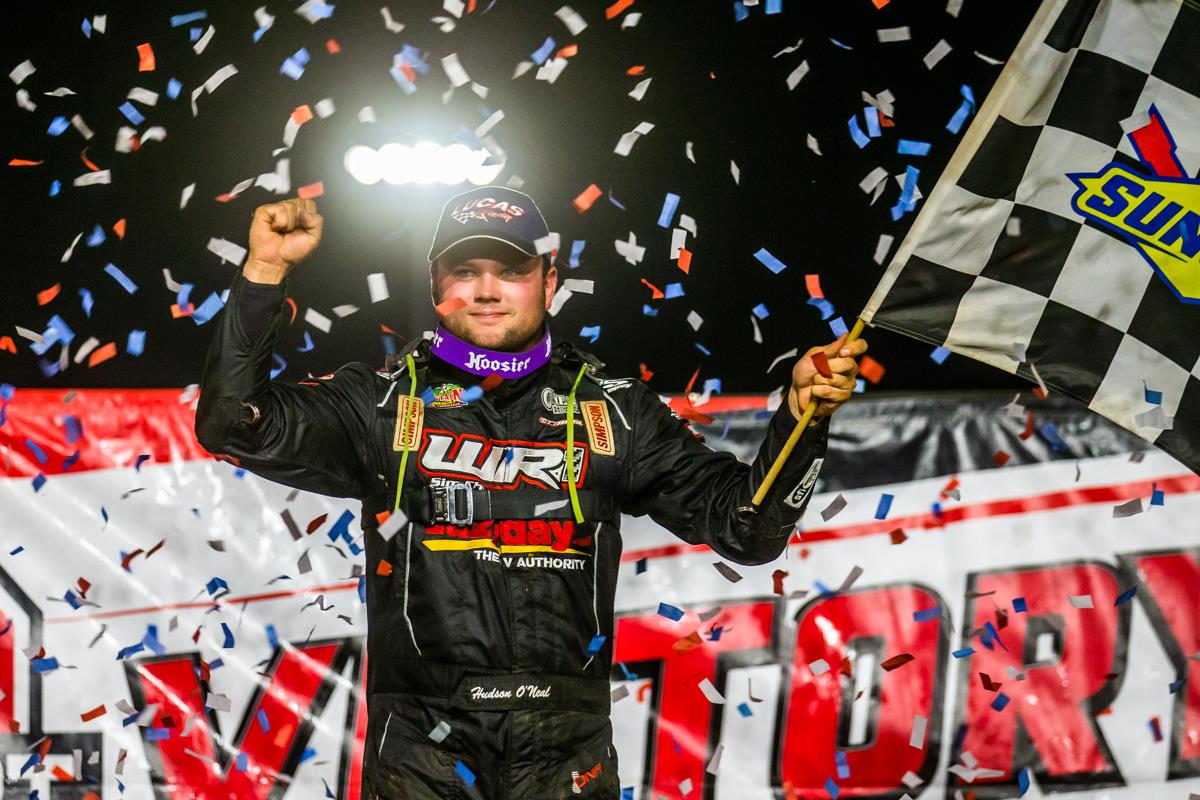 O’Neal Wins at I-70 in Inaugural Lucas Oil Visit

Odessa, MO (July 14, 2022) – Hudson O’Neal inherited the lead when race leader Brandon Sheppard suffered mechanical issues heading to the white flag on Thursday night at I-70 Speedway. Sheppard brought out the last caution of the race as he slowed on the main straightaway. The lap 28 Stop Tech caution set up a green-white-checkered finish in the inaugural visit by the Lucas Oil Late Model Dirt Series and Lucas Oil MLRA Series (co-sanctioned).

Owens jumped to lead around Sheppard on the opening lap in a race that was shortened to 30 laps from its originally scheduled 40 laps due to high engine temperatures and air temperatures which reached over 100 degrees during the day.

Owens led the first 11 circuits before Sheppard assumed command, but a fateful lap 28 ended his hopes for his seventh series win of the season. “I don’t really know what happened yet, we haven’t assessed the damages,” stated Sheppard. “We know the motor let go we just don’t know why. We were all running really hot out there. As hard as we were running it’s definitely disheartening. We had a really fast race car all night long and for it to end like that is disappointing for sure.”

In Lucas Oil Victory Lane for the second time in eight days and for the 15th time in his career the 21-year-old Indiana native felt bad for Sheppard who held a three-car length lead over O’Neal as the two headed to the white flag. “You just hate to win one like that, I think we were going to run first and second there. I would rather be lucky than good any day. We had a strong night all night long; we qualified good, heat raced good had a really good piece there in the feature. I am just so proud of my guys, and I am glad everyone is here this weekend.”

Owens who was seeking his fourth series win of the year and the 81st of his career with the series came up 0.562 seconds short of O’Neal at the finish. “We had a good car the whole time. I kind of assumed that highside was going to come in a little bit, but I didn’t know it was going to come in that good. We were just running wide open around there without even lifting. I was able to maneuver down there and keep up with those guys.”

McCreadie will maintain the series point lead heading to the next series stop in Granite City, Illinois on Friday night. “On a track like tonight when the water temps are going way up, I have just got to pick my battles out there. I figured on the last restart we needed to be one better and Jimmy got by us. As far as the points stuff it’s still so earlier, it’s mid-July there’s a long way to go.” 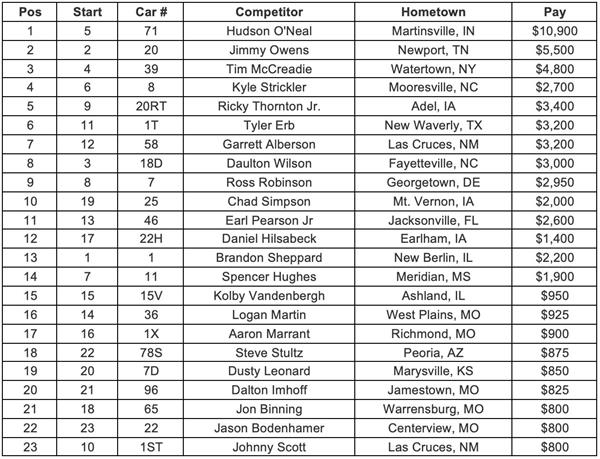