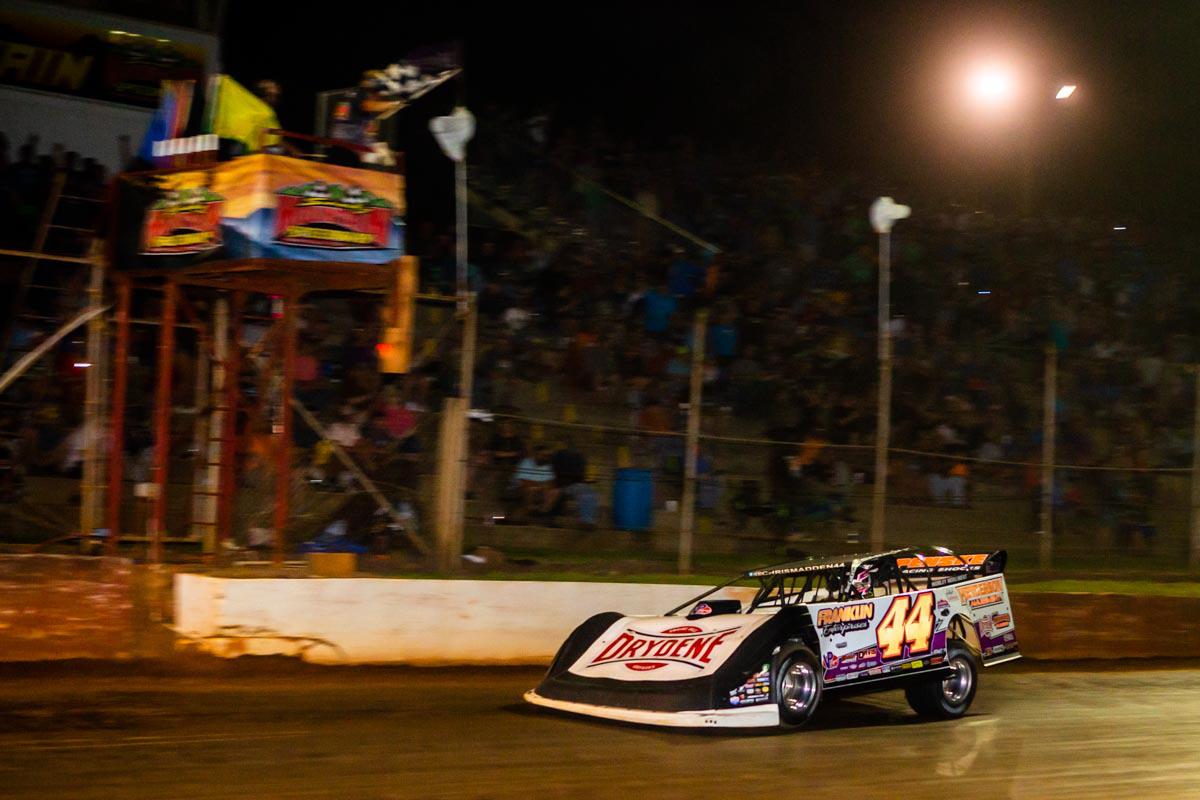 Madden made heavy contact with the fourth turn wall which allowed Jonathan Davenport to close the gap heading into the final lap. However, Madden held on for the win despite severe damage to the right rear of his No. 44 entry - crossing the finish line .355 seconds ahead of the three-time Lucas Oil Late Model Dirt Series National Champion. Brandon Overton took third at the stripe with Ricky Thornton Jr. and Mike Marlar rounding out the top-five finishers.

Madden bolted from the pole position to grab the lead at the start of the 60-lap event. Davenport moved around Carson Ferguson on the second lap to take over the second position. Madden then began to put some distance between himself and the other contenders in lapped traffic. With 22 laps complete Davenport started to gain on Madden as he fought heavier lapped traffic before the second caution of the race flew just one lap later.

As the race continued, Madden still held the point, fighting off challenges from Davenport and Brandon Overton. As Madden approached the back of the field in the closing laps he made hard contact with the turn four wall while battling through lapped traffic. Madden held off a final bid from Davenport to claim the victory – the richest overall purse in the history of Smoky Mountain Speedway.

In Lucas Oil Victory Lane for the second night in a row and for the 15th time in his career, Madden said: “I caught Terbo [Tyler Erb] there and I thought going down the back straightaway he was going to commit to the bottom, so I committed to the top and tried to get up beside him. He made a lane change suddenly and I was running way faster than him. We had to get on the binders hard and I got loose, I just backed it in the fence. You know when you have JD and Overton chasing you then you’ve got it hit every mark and you had better not miss a mark if you do then they will get by you.”

“You know we have had a great race car all year long,” Madden added. “This Rocket has been extremely good to us. It’s just amazing to come back to Smoky Mountain and win in front of such a big crowd. There’s always a big crowd here and a bunch of great people here with Roger [Sellers] and his crew. I appreciate you guys for putting on these big races in this part of the country for us.”

Davenport, who won the Lucas Oil Late Model Dirt Series “Historic 100” just two weeks ago, fell short of victory this time around, but still collected $20,000 for second. “You just never know when something is going to happen when you are leading you could cut a tire or something. I was hoping it would stay green once we got into heavy lapped traffic there so I could sneak around him. It’s really a technical place to get around. He [Madden] just had a little bit better race car than I did. Congratulations to him and his guys. I wasn’t going to run him dirty. I got beside him one time and that’s about all I could do.”

Overton rounded out the podium for the night claiming the third spot, earning $10,000. “It was about track position. We didn’t do a good enough job to win our heat race, so we had to start seventh. I was passing them, and I was still trying to take care of my tires. I knew there were two good cars in front of me and I was hoping they would race it out a little bit and maybe I would have had something left over to get them. I could make up a little time getting into one on the bottom, but they had enough grip to lead me off the corner. But we’ll take it.” 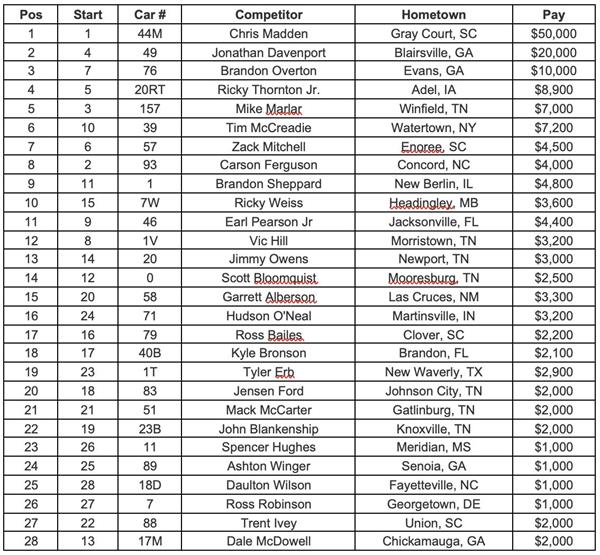