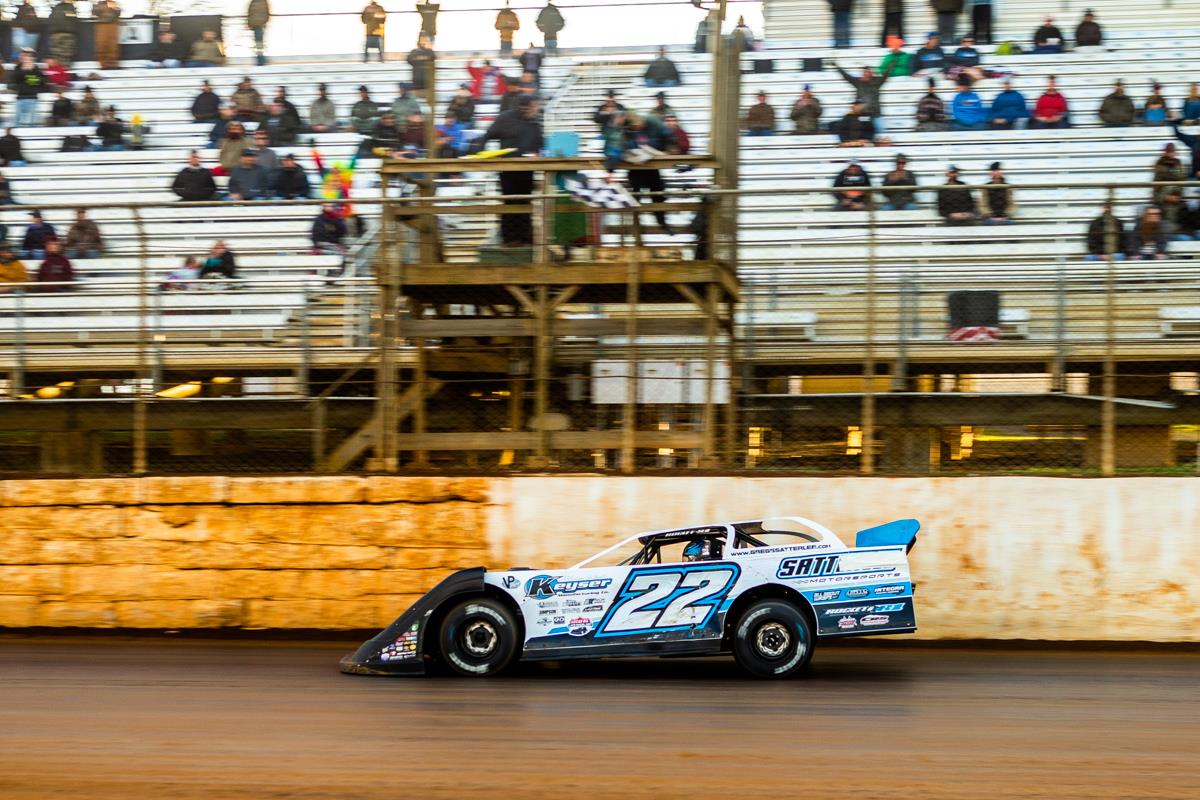 Satterlee Back to Lucas Oil Victory Lane at Port Royal

Port Royal, PA (April 10, 2022) – Gregg Satterlee inherited the lead in the Lucas Oil Late Model Dirt Series-sanctioned River Valley 40 at Port Royal Speedway on Sunday evening when the top two running cars of Kyle Larson and Earl Pearson Jr. both ran into difficulty on the 25th lap of the race. Satterlee dominated the remainder of the race to get his third career win in the series.

Brandon Sheppard finished in second with Tim McCreadie rounding out the podium in third. Jimmy Owens was fourth with Tyler Erb, the previous night’s winner at Hagerstown finishing fifth.

Larson and Pearson ran in the top two spots at the drop of the green with Larson grabbing the early lead. The duo put on a show in the race for the lead as they started to encounter lapped traffic by the 14th circuit. That didn’t matter as Larson and Pearson continued to race hard for the top spot slicing and dicing through lapped cars. The top two were starting to be reeled in by Sheppard and Satterlee as a four-car battle for the lead was ensuing.

Suddenly heading off turn four after some close quarters racing, Larson and Pearson made contact resulting in Larson spinning in front of the field and a broken steering component on Pearson’s car; drawing a caution and ending Pearson’s night.

Satterlee had closed on the race leaders before the caution but inherited the top spot during the single caution of the event. In the final 15 laps of the race Satterlee pulled away from the field for a 3.8 second advantage at the finish line over Sheppard and McCreadie to score his first Lucas Oil Late Model Dirt Series win since 2018.

The 37-year-old Pennsylvania native became the eighth different winner this season with the series. “Honestly from the center of turn three until you get to turn four you can’t see anything, so I don’t know happened down there. I could see one of them spinning, but luckily Larson was far enough around the corner because I wouldn’t have seen him. I guess this is our lucky day. I thought with that deal in the heat race I had ruined our night. Everything fell our way tonight. I have always wanted a Lucas Oil win here; this is definitely our favorite track to race at and it’s always nice to win here in front of these fans.”

“The track was really in good shape. We could race from the inside to the outside wall and every inch in between. Hats off to Steve O’Neal, the promoter. We love coming here to Port Royal, they put a lot of effort into this place and there is no other race track around like this one.”

Sheppard, four-time Lucas Oil Late Model Dirt Series winner this season, came home in second to Satterlee. “It was a good track and a good race going on there for a while. I was hanging on as good as I could, I don’t know if I could have passed any of those guys. It was unfortunate was happened to those guys (Larson and Pearson). Gregg got out there and he had a really good run. We are working really hard to get this thing up front and it’s paying off. We are very excited for the rest of the year.”

McCreadie, who ran second to Erb at Hagerstown on Saturday night came back with another podium finish on Sunday evening at Port Royal. “Hats off to my guys, they work so hard to try and get me feeling competitive again. We took big steps this weekend. I hate it for Earl and Kyle they were up front in Longhorn cars, and they were doing really well. We were there, the longer we ran the better we got. I had a little issue running off of four and I couldn’t run the outside like I wanted to.”

The winner’s Rocket Chassis is powered by a Clements Racing Engine and sponsored by Satterlee Motorsports, Keyser Manufacturing, and Integra Shocks. 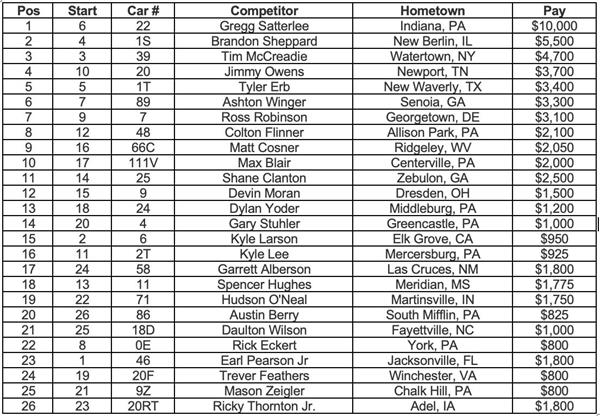