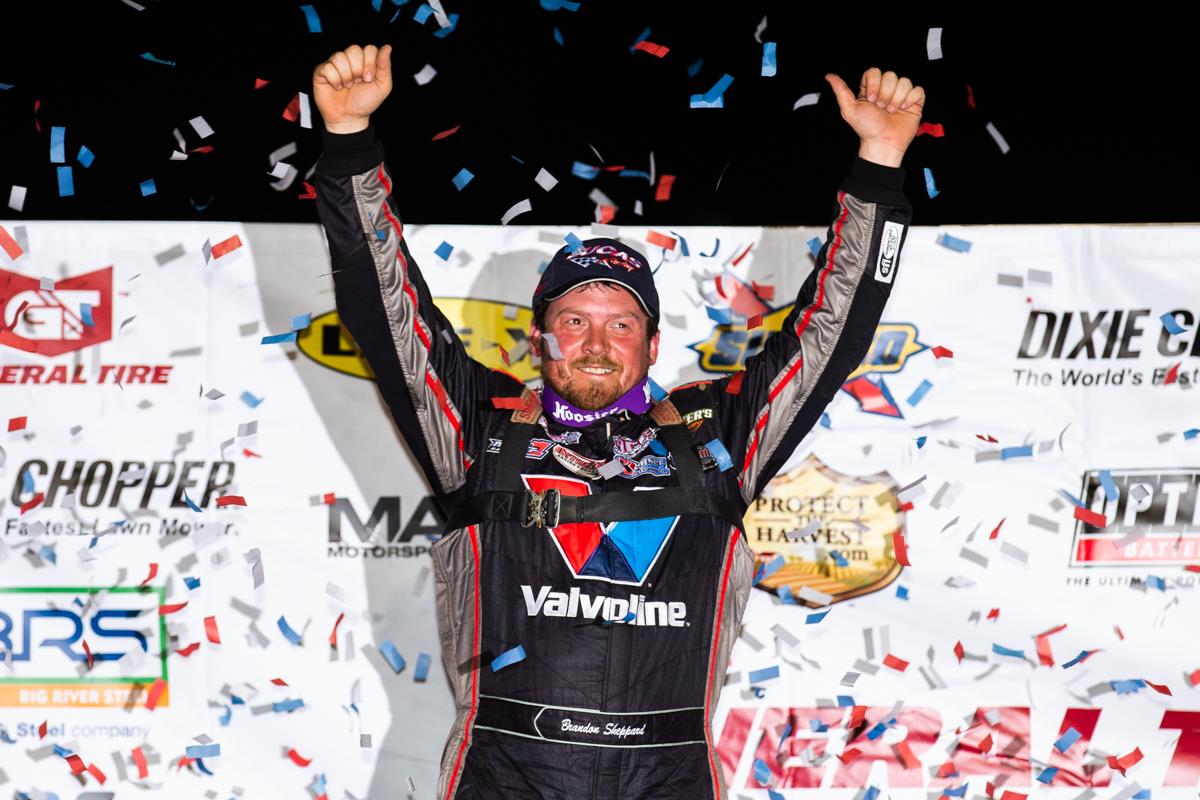 Lake City, FL (February 3, 2022) - Brandon Sheppard raced his way to victory on Thursday Night at All-Tech Raceway, leading all but one lap in winning the 40-lap Lucas Oil Late Model Dirt Series sanctioned event. It was Sheppard’s first-ever win at All-Tech in the General Tire Winter Nationals Presented by Line-X.

Devin Moran continued his solid start to the 2022 season as he moved from his 15th starting spot to finish second. Jonathan Davenport was running second on the white flag when apparent electrical issues dropped him to third in the final rundown. Shane Clanton took home fourth and Ricky Thornton Jr, who led one lap during the race, finished in fifth place.

Thornton and Sheppard started on the front row in the sixth race of the season. Sheppard grabbed the lead on the opening lap taking the top spot with Thornton Jr running in second. Sheppard held the point through a couple of early cautions as Thornton Jr continued to pressure him for the lead.

Thornton was able to get by Sheppard on lap seven, but a lap later Sheppard would fight back and regain the point. Sheppard then kept Thornton at bay. Mark Whitener was making time on the top side, trying to make his way to the front. Just as Whitener cracked the top five his car slowed dramatically off of turn number two and pulled to the infield as his night was over.

A long green flag stretch of racing took place from laps 14-37 but a caution with three laps remaining would bunch the field and clear out traffic for Sheppard. The restart had Sheppard in control, but Davenport was making strides on the outside of the track, passing Thornton for second after the restart. As Sheppard came out of turn four for the checkers, Davenport would slow allowing Moran to slip by at the finish.

Sheppard, the 29-year-old Illinois native went to Lucas Oil Late Model Dirt Series victory lane for the 22nd time in his career as the four-time Dirt Track World Championship Winner became the fourth different winner in the first six races of the year. “I was just honestly hoping everyone was having as hard of a time steering as I was out there. This track is so tricky, it’s super slippery, the brown spots have a lot of grip to them. It was a fun race, but definitely stressful for me. I thought for sure on that last restart that one of those guys was going to come cruising by me on the outside. But I guess they were having the same issues as I was.”

Moran charged from the inside of row number six and came home in second for the fourth time this year to go along with his two victories. “You just had to be patient out there tonight. It was wild out there. We ran the bottom for what felt like the first 100 laps. It was such a slow pace. After the first 15 or 20 laps we started to get the crumbs out there and we could finally run out farther on the track. It was so sketchy; it was like East Bay where you can’t steer. It’s like racing a four-wheeler on a pond of ice. I just tried not to make too many mistakes.”

Davenport, a three-time series champion, was looking for his first win of the year; instead, he limped across the line in the third. “I don’t know if it was an electrical issue or what happened. We will have to go through the car to see what it was. It actually happened before that last caution. The lights went out and I was flipping switches. I would have liked to have run those last three laps on full power. I found something through there, I passed Ricky and was gaining on Brandon a little bit. I just needed a bit more power and I might have had something for him there. 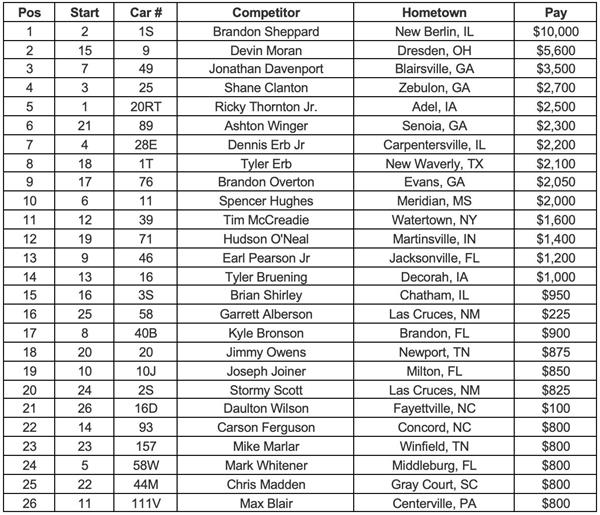 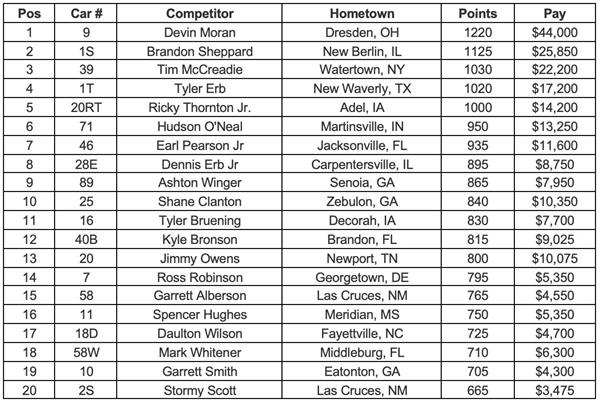 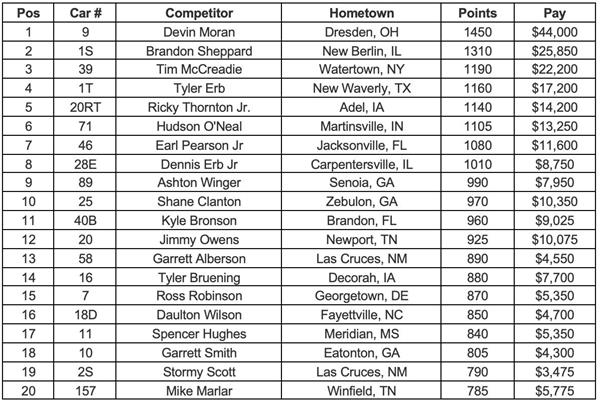