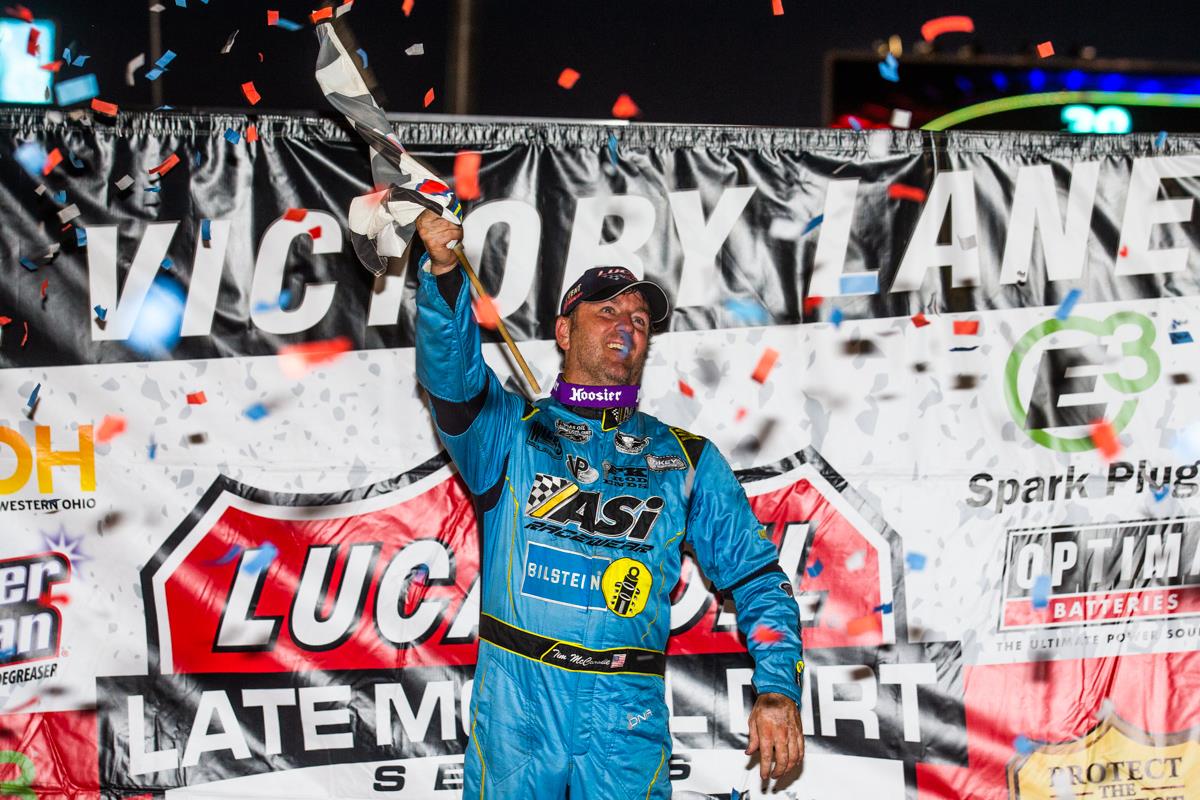 Brandon, SD (July 19, 2022) – Tim McCreadie made it a memorable first ever appearance by the Lucas Oil Late Model Dirt Series on Tuesday night at Huset’s Speedway. The reigning series champion and current points leader took the lead with ten laps to go to record his fourth series win of 2022.

In a hard-fought race that saw three different leaders McCreadie came from the sixth starting position for his 32nd career series win. Mike Marlar charged from the 12th position to finish in second. Tyler Erb rebounded from fifth after the last caution of the race to claim third at the checkers.

Erb bolted to the lead at the start of the 40-lap main event ahead of fellow front-row starter and pole sitter Garrett Alberson. Garrett Smith then made his presence known taking over the second slot on the second go round. Smith stayed in second until McCreadie got by him on lap ten as a hotly contested race for the second spot was developing.

Erb held the top spot until Ricky Thornton Jr. came through the field to grab the lead by lap 13. Thornton’s wall-banging effort kept him out in front until lap 30 when McCreadie pounced on the chance to take the lead on the 30th circuit.

A caution with 33 laps scored bunched the field one final time but McCreadie had smooth sailing the rest of the way on the restart to take the win by 1.942 seconds ahead of Marlar.

McCreadie, who entered the event leading Sheppard by 100 points stretched his lead out in the race for a dirt late model record $150,000-to-win points championship. “Hats off to the track prep guys, they did an amazing job tonight. They didn’t have it completely flooded, they had a hard base, and it built a big cushion and left some brown on the bottom so we could do what we love to do. That’s the most fun I have had in a car in three or four months. Hope the crowd liked it, it was an awesome time out here.”

“I followed Ricky for a little while and it was very beneficial to not lead early. They were stuck in their groove and I’m touching it in one and two and coming to the bottom off two. I was kind of flirting around in three and four to see what would work best for me and when we caught some traffic, I just think I was a little more maneuverable than the guys I was racing with at the time. Tonight was one of those nights I felt like we had everything clicking,” said the 48-year-old New York racer.

Marlar kept an impressive streak of top five finishes since last month as the veteran racer from Tennessee came home runner-up earning the hard charger of the race after starting on the outside of the sixth row. “It was a great racetrack. I am happy to be here in South Dakota in the middle of the week getting to race. We were able to roll the hub all night long. I moved out and ran the cushion a few laps up there. But I felt like I was down there where there was less traffic. Just running up front it’s fun to be in the race and sometimes when you’re running 10th or 15th you don’t really feel like you’re in the race.”

Erb led 12 of the 40 laps to finish the night out on the podium in third. “This is a great racetrack; it was a lot of fun. It was an awesome race. This is a beautiful facility and a beautiful racetrack. This is literally one of the favorite racetracks now. You can’t ask for much more here. Hopefully everyone here will tell a friend and bring more people next time.” 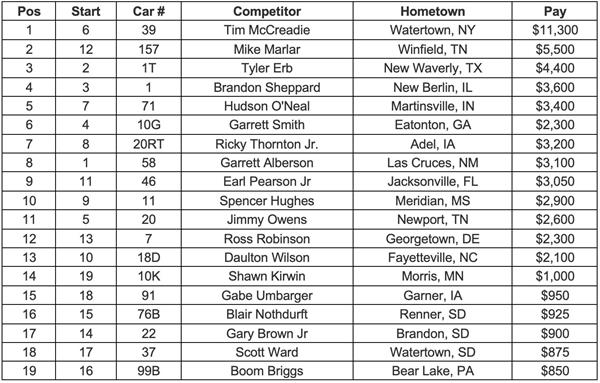