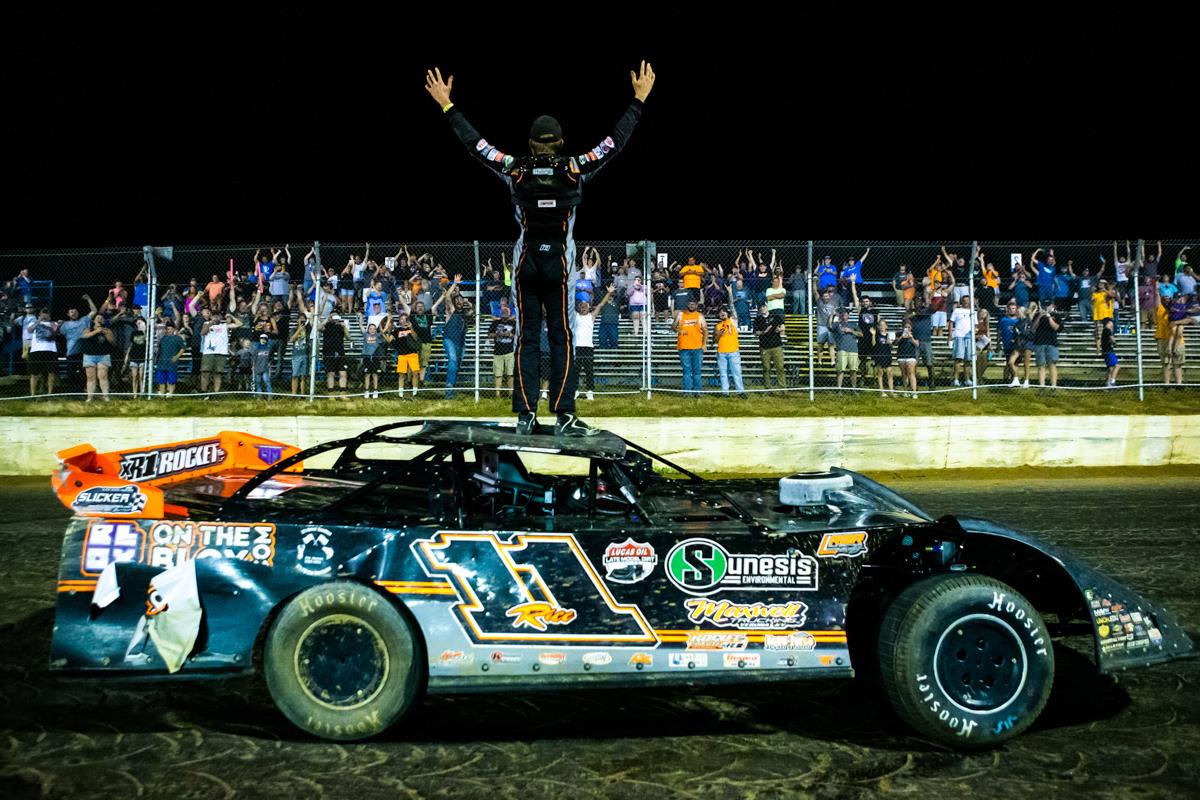 In the race that was originally scheduled for early May, but was rained out, Rice came from the ninth starting spot for the win grabbing the lead away from Earl Pearson Jr. on the 27th lap. Rice was never seriously challenged the rest of the way as he scored the win over Ricky Thornton Jr., Garrett Alberson, Jason Jameson, and Brandon Sheppard.

Pearson’s last Lucas Oil Late Model Dirt Series win was at Florence in July of 2020 and tonight he stormed to the early lead ahead of Thornton and three-time Florence track champion, Robby Hensley. Rice made quick work of several drivers climbing to the second spot by the time the first caution of the race came out with 19 laps complete.

Rice stalked Pearson for the lead, passing the four-time series champion on lap 27. The lap was scored as a caution would come out for debris. Under the yellow Pearson pulled off the track after having his oil filter knocked off the car.

On the restart Rice immediately pulled away from Thornton and Alberson, leading the race by more than half a straightaway as he raced through traffic. Without the assistance of any caution flags over the last 33 laps of the race Thornton and Alberson could not get close enough to challenge Rice, as he would lap up to the top ten finishers by the time the checkers flew.

In Lucas Oil Victory Lane for his second straight year the reigning Spring 50 winner complimented the fans for their support. “I may not be any good anywhere else, but they can’t say I’m bad here. These fans make it so awesome to do it here. It’s so close to home. The fan base here is unreal. We fired off at the start and the car in three and four was great I kept throwing sliders until I took the lead. It’s unreal to do it in front of these fans. Thanks to Rick Jones, he gave us this ride in 2019 and I think he’s going to keep us around.”

“I really wasn’t sliding the car and I was saving the tires. When I got out in front, I thought man I got here awful quick and hopefully I didn’t burn my stuff up. I knew Earl was good. I knew if I could get out in front, I would be so much better. It was good thing it wasn’t 100 laps I was getting wore out. I got to where I couldn’t steer. It’s unbelievable we won this race two years in a row,” said Rice.

Thornton, who is still looking for his first series win of the 2022 season came home in second as he recorded his 11th top five finish of the year. “We had a good car and were pretty maneuverable out there. Congrats to Josh on the win; it’s no surprise how well he runs here.”

Alberson, who entered the night second in the O’Reilly Auto Parts Rookie-of-the-Year of the chase rounded out the podium with his best career finish with the series. “We haven’t done well here in the past and to come home third against these guys, it also says a lot for this Roberts race team. We have had a really fast car and hopefully we can now get the finishes the team deserves.” 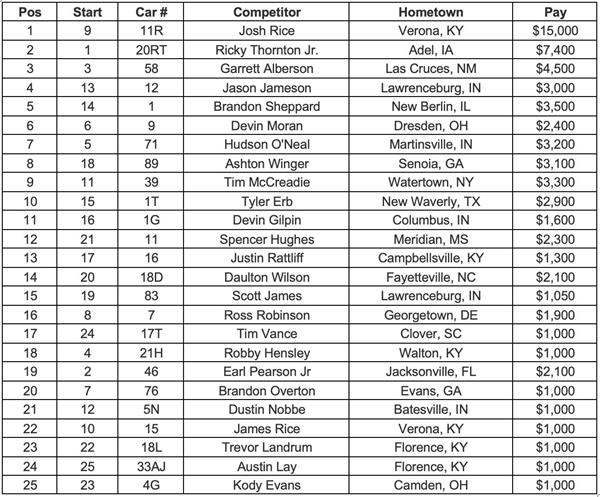