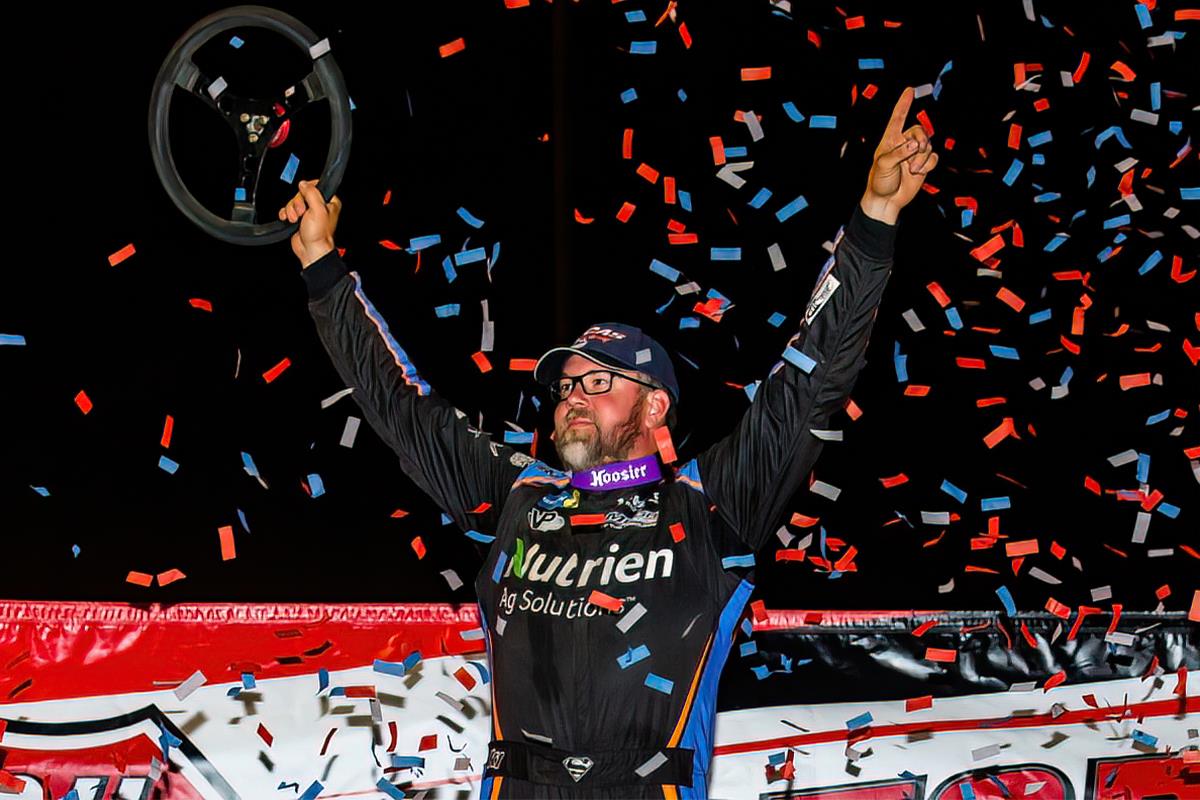 The track located just south of Parkersburg, West Virginia had sat idle for seven years until promoter Cody Watson brought racing back to life last year; completely refurbishing the facility which had originally opened in 1985.

The only thing that slowed Davenport during the race was four Stop-Tech cautions which kept the field bunched up behind him, but Davenport sprinted away on each restart. Overton and Pearson had a spirited battle for second. Seventh starting Pearson reached second by lap 31. Pearson had momentum on the bottom, but a caution on lap 34 halted Pearson’s drive to catch Davenport.

On the restart with 15 laps to go Overton regained the second position from Pearson as the race went green until the final caution appeared with 38 laps scored. Davenport, as he had done all night long, proved to be dominant driver in the last 12 laps pulling away for a 2.142 second advantage over Overton at the finish line to record his fourth win at the 5/8ths mile speedplant in the last two years.

Overton earned a $20,000 payday for his second-place finish and Pearson took home $10,000 for his third-place run. Pearson had won the last $50,000 to win race held at WVMS back in 2010 when he won the Dirt Track World Championship. Satterlee who ran third in Friday night’s $15,000 to win race came from ninth to take fourth.

In Lucas Oil Victory Lane for the 59th time in his career Davenport was able to shake off the frustrations of his last three $50,000 to win attempts, finally collecting the big paycheck after he felt like he let those races slip away. “It’s huge for sure. It’s great for me, my team, my owners, and for my sponsors. It will make the ride home a little easier tonight. We have had a great car the last two months. My guys have worked hard, and we have been trying stuff. They hit on something just about wherever we go, whether it’s been a big track or a little bullring.”

“Our car has been really good. It doesn’t matter which one it is we run. When you look at the top three, they are all Longhorns. Hats off to everyone back at the shop. We appreciate everything they do. Thanks to Cody (Watson) for putting this event together. He had a vision when he took this place over a year and a half ago. He has turned it around, they put on a heck of a show tonight.”

Davenport’s win was his fourth in his last five starts at WVMS. His lone non-victory was Friday night when he finished second to Moran. “We were almost batting a thousand, we let one get away from us last night but we made up for it tonight.”

Overton, who made a last-minute decision to race at WVMS took the runner-up spot in his first appearance at the track. “It was crazy before the feature. I asked him (Davenport) what tire to put on. We put a hard tire on, and I think he had one on the next step down but congrats to him he has been good all weekend. I am proud of my team. We weren’t very good yesterday so to come back and run second tonight, I’ll take it.”

“The race track they are working on it; it was definitely better tonight than it was last night. The coolest thing about this place is the fans. I don’t think I have seen so many people come up and say something to me. We appreciate all of the fans for coming out and supporting us. It’s fun to see all of you cheering up there on the hill.”

Pearson, who held the second spot after starting on the inside of the fourth row wanted the race to stay green. “It was a good race for us. We started seventh and come up to second there on the bottom. I just didn’t need those cautions; the restarts weren’t helping me at all because we just couldn’t get going on those. Brandon Overton, he is one of the best in the business and to race with him like we did it says how good our car was, so we are happy to finish third.” 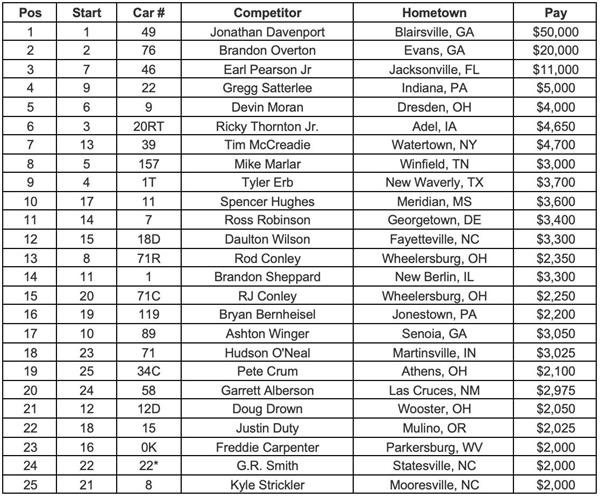