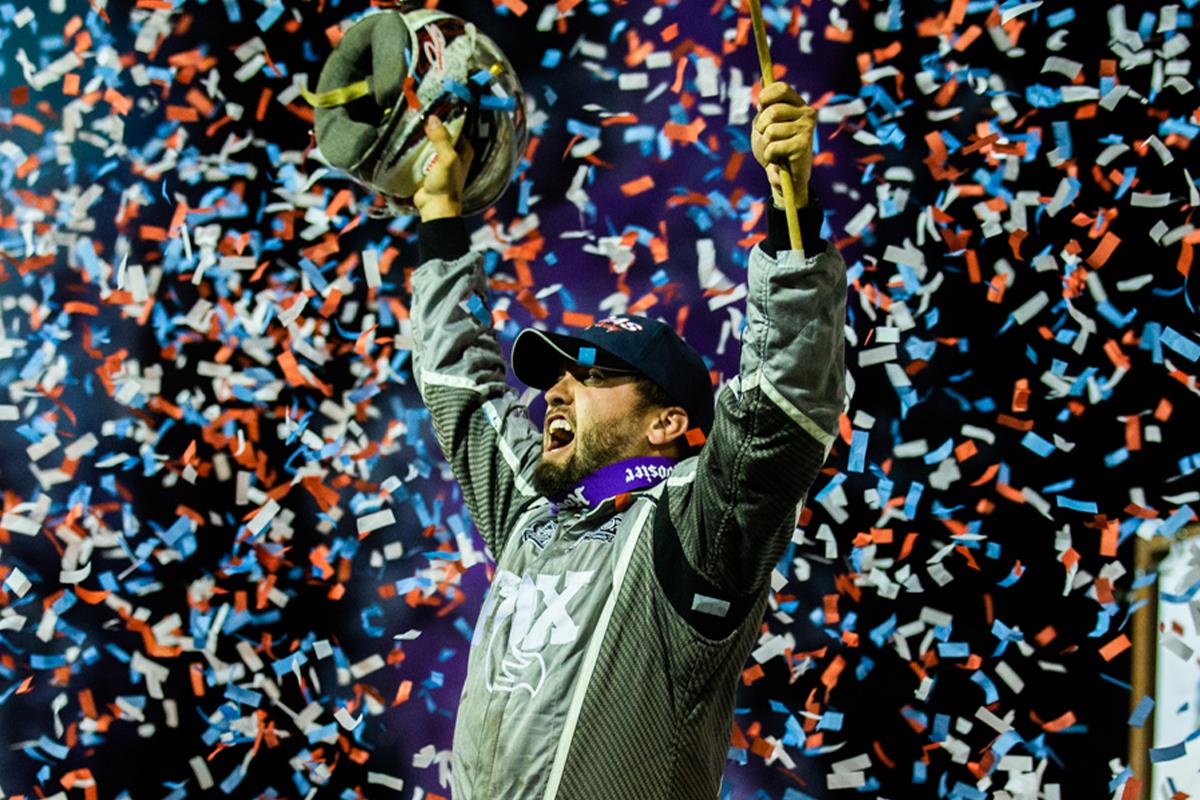 Wheatland, MO (May 28, 2022) – Chris Ferguson emerged from a great battle for the lead in the 30th Annual Lucas Oil Show-Me 100 Presented by ProtectTheHarvest.com on Saturday night at Lucas Oil Speedway. Winning the first dirt late model crown jewel of his career, Ferguson is taking the record $50,000 payday back to North Carolina. The 30th Annual event was the richest first-place prize ever offered for the event co-sanctioned with the Lucas Oil Late Model Dirt Series and the Lucas Oil MLRA.

With 12 laps to go, the top seven drivers were on the same straightway when Ferguson went to the outside of Jonathan Davenport trying to pass him for the lead. Davenport made contact with Ferguson that sent Davenport spinning, bringing out the Stop Tech caution with 88 laps complete.

On the restart Ferguson, who had started in tenth, pulled away for the win becoming the 18th different driver to win the sports first crown jewel event of 2022. Ricky Thornton, Jr. led four laps in the race but finished second earning a $20,000 payday for his SSI Motorsports Team. Defending series champion Tim McCreadie ran third after starting 17th. Jimmy Owens, a four-time Show-Me 100 winner was fourth and Chad Simpson, the Allstar Performance fastest qualifier for the weekend was fifth.

Ferguson, who won at Wheatland in his first appearance at the “Diamond of Dirt Tracks” in the 2020 Diamond Nationals methodically worked his way through the field to put himself in contention for the win. “I don’t know what to say, I am speechless. God is so great he put me in this situation. That was awesome, that was amazing. I am so thankful to be here for this. You fans are the best, thank you all for everything.”

“JD got kind of stuck behind those lap cars. I found a groove about a half-car-length out from everybody else. I rolled him (Davenport) in one and two and got door-to-door with him. I think we both got in hot, and we hit a little bit. It knocked the steering wheel out of my hand, but I was able to grab it back and keep the lead and I guess he didn’t make out so well.”

“I hated it for him. I think we may have had a little better car than him. That was a heck of a battle. All the people that don’t realize our cars are fast that showed them we are. For a long-time I have dreamed of being at this level. I feel like I can drive good enough to get it done.”

Thornton Jr, the reigning Dirt Track World Championship winner was close to picking up the second crown jewel event of his career, came home in second. “We came really close. It kind of stinks to run second, but we will take it. Congrats to Fergy on the win. He was really good, especially late. We had a really good car yesterday and that put us in a good starting position for tonight. I really wanted to pick up the win for Scott Coleman of Big River Steel, he was here, but we will definitely take a second.”

McCreadie, who was seeking his first Show-Me 100 victory passed the most cars during the race to round out the podium in third. “We went with a different tire combination, maybe me and two other guys in the field had it. When I pulled out on the front stretch, I thought we were in trouble. I knew I couldn’t really get off the brown, so I just tried to drag the left sides through the brown as good as possible. I didn’t want to overheat the tires. On the restarts I was amazing for 6 or 7 laps then I would fade so I would like to have had a few more restarts. My crew did a great job I am just the guy who gets to drive it.” 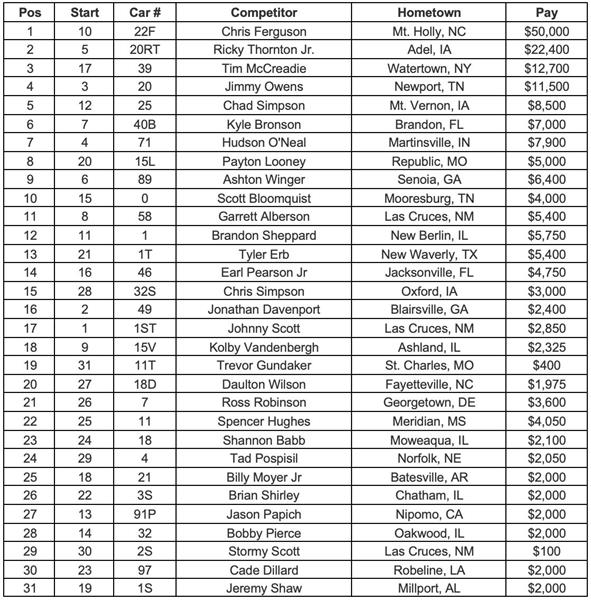