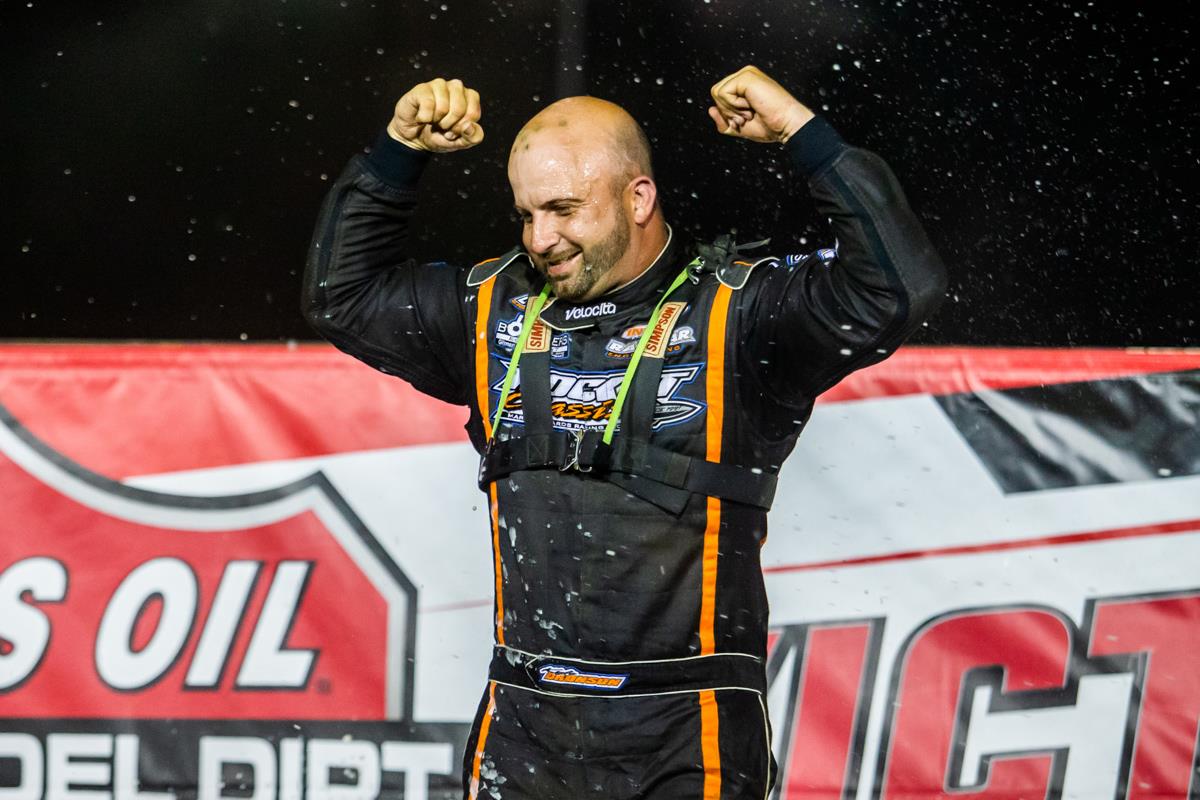 Greenwood, NE (July 24, 2021) – Kyle Bronson pulled away from the pack and cruised to victory on Saturday Night at I-80 Speedway, winning the 11th Annual Imperial Tile Silver Dollar Nationals by more than ten seconds over runner-up Tim McCreadie.

Bronson took the lead from Chase Junghans on lap 48 and dominated the remainder of the race. Junghans held the lead for the first 47 circuits as Bronson made several attempts to pass him for the lead. Bronson was finally able to pass Junghans coming off turn two with 32 laps remaining in the race.

McCreadie eventually cleared Junghans on lap 66 for second. Even though McCreadie moved into second he was still several car lengths behind the leader. The second of two cautions flew on lap 32, the race went green after that until the checkers flew. Bronson’s margin of victory was 10.492 seconds.

McCreadie will maintain his points lead heading to Florence Speedway next month. Jonathan Davenport had closed the gap on McCreadie to just 45 points heading into the race but finished in 27th after dropping out of the event on lap 22.

Earl Pearson Jr. came through the field to finish third after starting in 14th. Jimmy Owens came home in fourth followed by Junghans.

Sixth place starting Bronson went to Lucas Oil Victory Lane for the fifth time in his career. “I love coming to this place. This car was awesome, and this Clements motor helps me a ton on that top there. This is the most pumped I have ever been in my life. This is pretty awesome. I couldn’t do it without my guys, they have been making my job a whole lot easier. They have been having this thing right, I am just the guy holding the steering wheel. They have been giving me everything I need to win.”

The 2017 Silver Dollar Nationals winner, McCreadie, finished in second. “I just lost my side bite there. Once the brown went away, I couldn’t get around the cushion because I was so flat getting in, and the car had no scotch. To run low was the only way to get my car up in the air to get it in attitude to try and get off the corner.” McCreadie earned a $20,000 paycheck for second.

Pearson, who changed cars after the first three nights took third at the finish. “The car was really good when we started off and the whole race it was good. We could move all around. The biggest thing we could do that a lot of them couldn’t was turn through the center. I could just turn up under them and drag race them down the straightaway.”