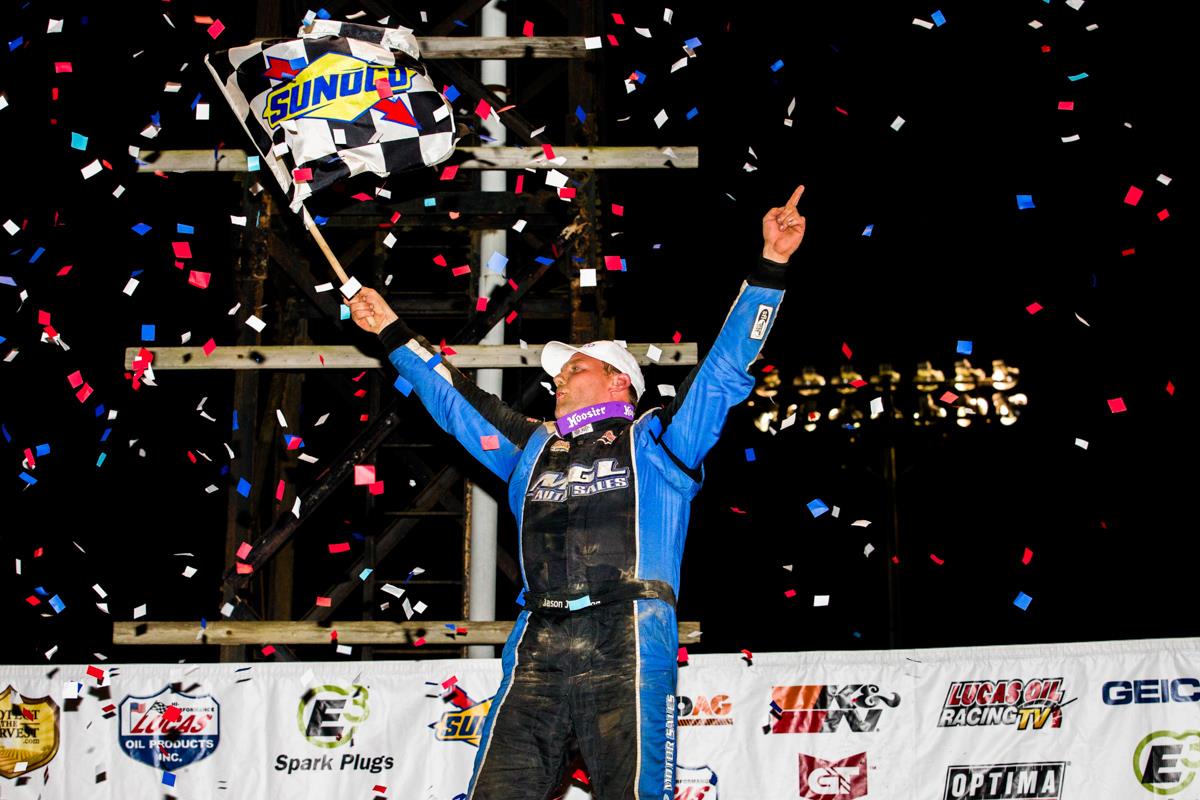 Jameson took the lead from Scott Bloomquist on lap 33 and then had to hold off the challenges from Josh Richards. A caution with ten laps to go turned into a two-car battle between Jameson and Richards with the Indiana driver crossing the line to cap off a very exciting race.

Surrounded in victory lane by several well-wishers, an emotional Jameson thanked a multitude of people. “I can’t thank my crew enough, especially Tim, Jeff, and Tony and everybody who makes this happen. I don’t want to see this month end. I wish my car owner James [Rattliff] was here to see this. Scott [Bloomquist] drove the wheels off of that thing. It made me get up and drive a little harder.”

Jameson survived the next to last restart of the race as it appeared both Richards and Bloomquist were primed to take the win away. Richards briefly got the lead back, but Jameson fought to regain the top spot. “It was fun racing with those guys. They raced really hard and clean. You could throw a slider on them and they would return the favor without running over you. I felt a vibration near the end I think the motor was getting hot. I tried to run into the corner and keep my speed. I just about lost it in turn two with a few laps to go.”

Richards was looking for his third LOLMDS win of the year. It nearly came to fruition as he came home in second with the Best Performance Motorsports, COLT Firearms, Rocket Chassis. “It was a pretty crazy start there. Scott [Bloomquist] started off good and then we got it going up top. He [Jameson] did a great job tonight. Thanks to the fans for coming out and enduring this night. They saw a great show.”

“After about four or five laps the tires would get really hot. We had to back-pedal there for a little bit and then he [Jameson] started to pull away. This place is a lot of fun. I think it has been different every time we have been here. It was the first-time we had run the cushion for that long. We will come back later this year and give it another try.”

Bloomquist was in the thick of things for most of the race and took the third spot at the finish. “He [Jameson] was just a little bit better than us tonight. He could run the cushion. It was a little rough on us to run the top. We just had to move down to the bottom and see if we could get something working there. The top was just too dominant tonight.”