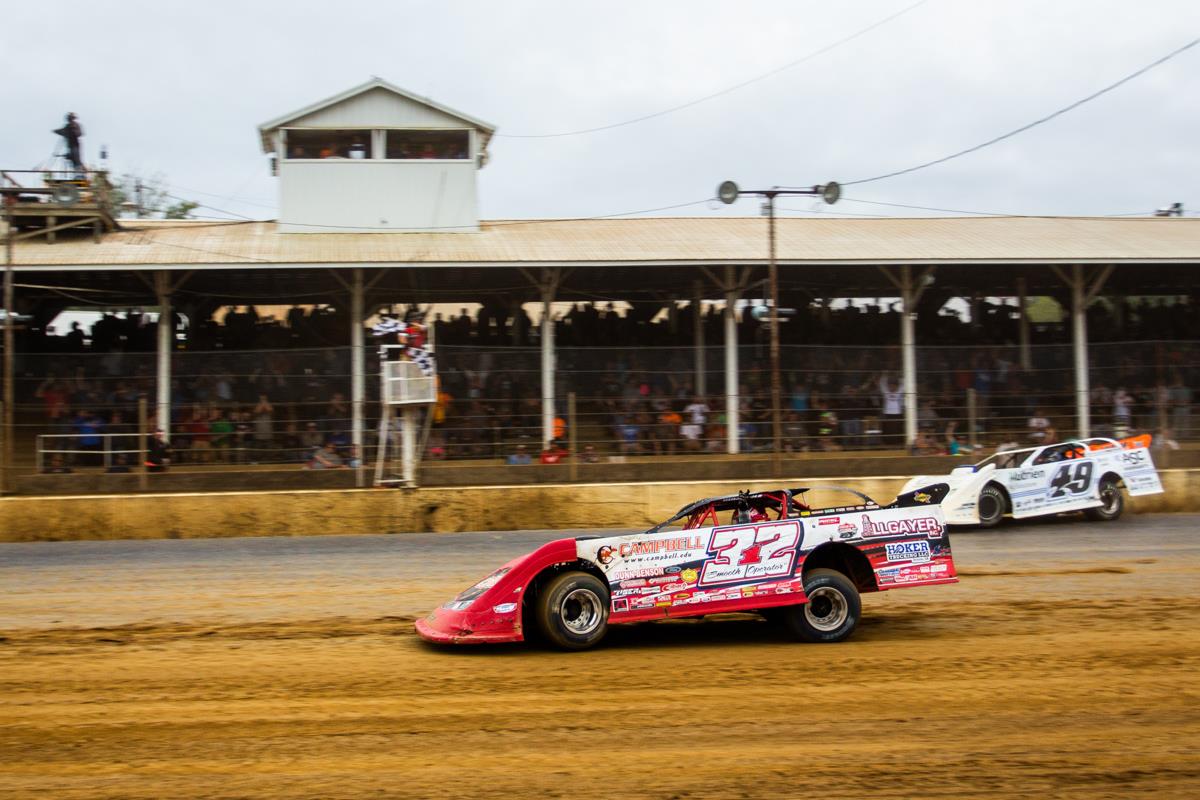 Mason Zeigler led the first seventeen laps until Tim McCreadie powered to the point. McCreadie held the lead until lap 60 when Davenport roared from the sixth-starting position to take over the top spot. After a caution with 19 laps to go Davenport began to pull away.

Pierce remained glued to the bottom of the track as Davenport’s lead slowly evaporated. Pierce pulled even with Davenport in the waning laps and was able to make the pass as the two exited turn four heading for the white-flag. Pierce then held off a last lap effort by Davenport to take the victory.

McCreadie crossed the finish line in third. Jimmy Owens stormed through the field to finish fourth, after pitting on lap 57 for a tire change. Darrell Lanigan came home in fifth.

Pierce was breathless in his Lucas Oil Victory Lane post-race interview. “Wow, out of all of the places to win my first big race of the season, I didn’t think it would happen here at Brownstown. You have to stay so focused here. It gets really slick. To finish second to JD [Davenport] would not have been bad. Thanks to all the fans for coming. I don’t know what to say, my emotions have taken over.”

“It’s been a long year. We have been so close to getting some big wins, to finally get it feels really good,” Pierce added. “I have got to thank my dad and Danny Myers. I didn’t think what they suggested would work. I think I won a kid modz race here before, but this is obviously very special, this track has such a great racing history.”

“On that last restart I didn’t know if I could stay with him [Davenport] but on the long-run I think I was better than him. It worked out, I don’t know how it did. I can’t wait to watch the re-play of this race.”

With his runner-up finish, Davenport will maintain the series points lead heading to Dixie and Rome next week. “Bobby is good no doubt about it. He gave me the Silver Dollar Nationals back in July at I-80. He [Pierce] did a heck of a job. On that last restart I thought I might be in trouble because I didn’t have a lot of grip left on the tires. I think I let them cool off too much. From the way we started the weekend and after starting seventh in our heat race and to get to the front, hats off to my crew. We are headed in the right direction and it was a good night as well.”

McCreadie, who led 41 of the 100 laps commented on his third-place finish. “It was a lot of fun out there today. Hats off to Bobby and Jonathan, we are happy to be competitive. We are doing it harder than anyone in the pit area, it’s great to run up front against these guys.”