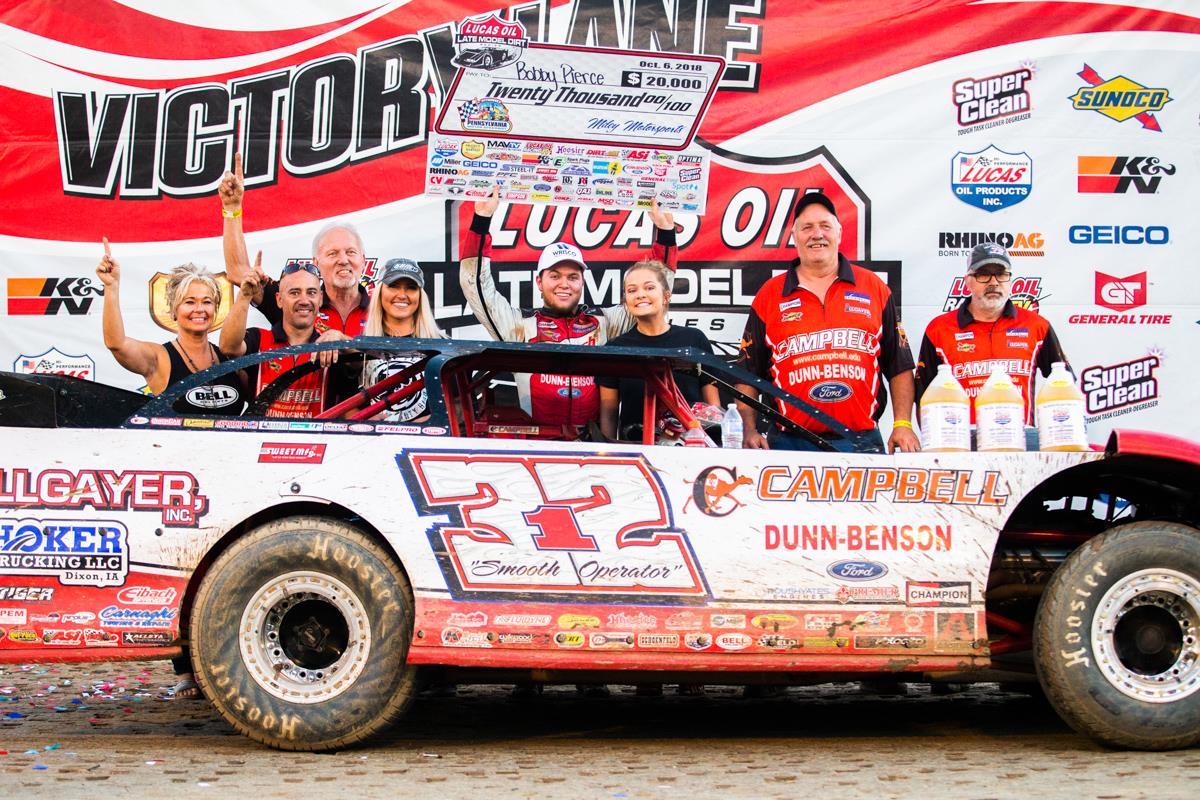 IMPERIAL, PA (October 7, 2018) – Making his first career start in the Pittsburgher 100 at Pittsburgh’s Pennsylvania Motor Speedway, Bobby Pierce roared to the lead on lap 91 and then pulled away for the $20,000 victory.

Pierce started tenth on the grid and pitted on lap 44 for a fresh right rear tire before charging through the field and finally overtaking Owens in the final nine laps of the race - securing his fourth Lucas Oil Late Model Dirt Series win of the season. Owens crossed the line in second-place with Earl Pearson Jr. taking third. Jonathan Davenport and Josh Richards completed the top five.

“I am so out of breath right now,” said the 21-year-old in Lucas Oil Victory Lane. “It was really nerve-racking out there. I was just trying to keep it out of the guardrail. I am speechless right now. We were so close at I-80, the Dirt Million, and Knoxville, but to win another big race after Brownstown is great. I want to thank my family and crew. I saw my dad waving his sticks frantically which meant for me to pit under that one caution. I didn’t have a tire down so there was no courtesy laps. The crew had to hustle to get me back out there. Fortunately, there were a bunch of us who pitted at the same time.”

“It was a perfect time to pit because it gave me a lot of race left to get to the front,” Pierce added. “After I pitted I thought I was a sitting duck because I was running in the back there for a while. Then I started running up top a line further than I was before and that helped. When I caught the top two it looked like Sheppard was hanging on and Owens was going to be hard to beat. He is so good in these 100-lap races.”

“Our car was better on longer runs. I didn’t know how this race would turn out since this is my first time ever racing here. It is truly a momentum track and it turned out to be a great race. I hope we get to come back here next year,” said the winner.

Owens took the lead on lap 88 from Sheppard and held the point until Pierce’s momentum catapulted him ahead. “Congrats to Bobby Pierce and that entire team. When I got by Sheppard, I thought I could lead to the end, I sure didn’t think that someone could pass me on the outside, but he slid under me in one and cleared me. There was nothing I could do about it when he went by. We held on for second, but that was a pretty exciting race for the fans, I’m sure.”

Pearson pitted on lap 37 and also came through the field to finish in third. “We got a couple of lucky breaks there on some of those restarts. Our car was really good towards the end. Congrats to Bobby and the Dunn-Benson team on the win. A couple of weeks ago at Brownstown, Pierce and I came through the field quickly. It was good run for us today.”