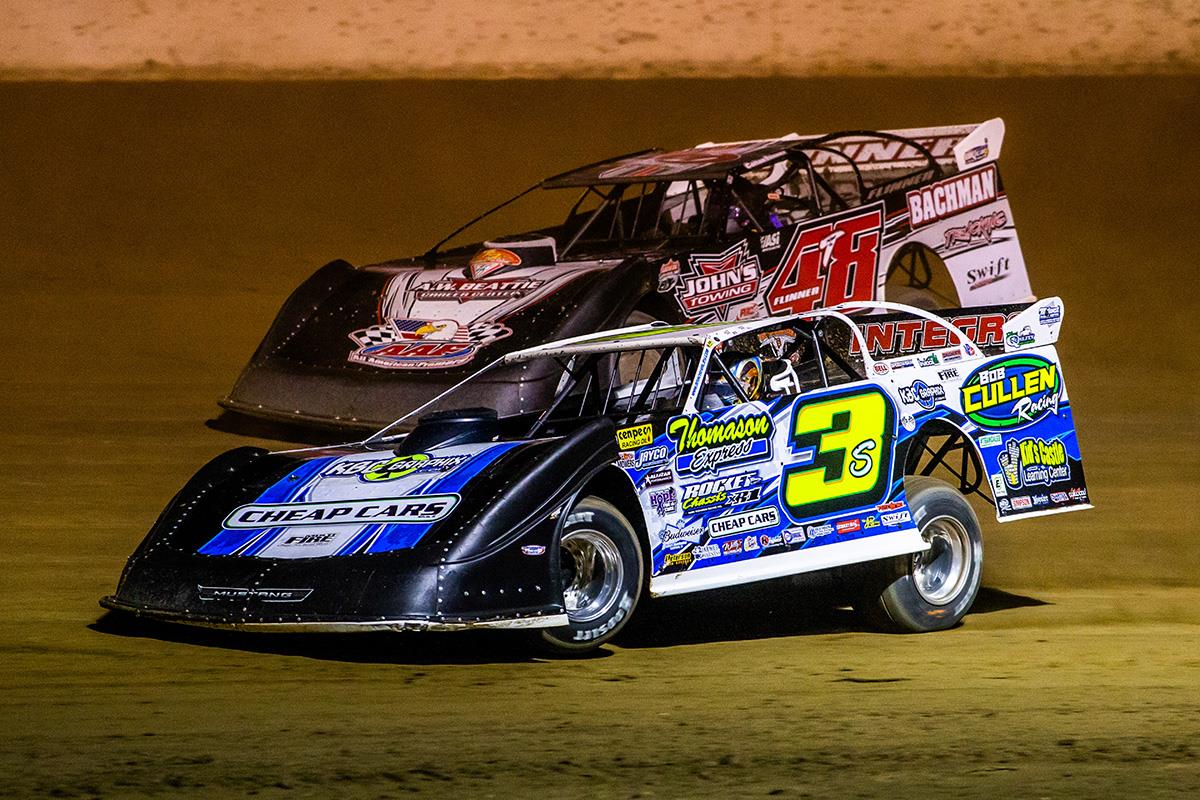 The first heat on Friday night saw the 2011 DTWC winner, Don O’Neal charge from his third starting position to win the race. O’Neal took the lead from Jason Jameson as he pulled away for the win. Jared Hawkins; who finished fifth in last year’s DTWC; finished in second, followed by Boom Briggs and Jameson.

The second heat in round one saw another third-place starter charge to the front and the win. Ricky Thornton, Jr.; who is subbing for Hudson O’Neal; took the lead from Delmas Conley and then stormed away for the victory. Gregg Satterlee came from fifth to finish in second-place, with seventh-place starter Bobby Pierce coming home in third. Chris Ferguson was fourth at the finish.

The third heat in the first round went to Brian Shirley as he bolted to the lead from his outside front row starting spot. Shirley pulled away for the win. Dennis Erb Jr. finished in second with Darrell Lanigan and Chase Junghans completing the top four.

In heat number four, Dale McDowell became the first pole sitter to win a heat. He took the lead at the start of the race and led the entire distance. Zack Dohm; who started alongside McDowell in row number one; finished in second followed by 2018 Portsmouth Raceway Park Late Model track champion, Eddie Carrier Jr. Josh Richards, the defending DTWC winner, came through the field to finish fourth after starting tenth.

The final heat race of round one belonged to Mike Marlar, who grabbed the lead at the start of the race and went unchallenged for the win. Jonathan Davenport came from fifth to take second behind Marlar at the finish. Doug Drown was third with World 100 winner, Tim McCreadie taking fourth.

The second round of heat races began with Josh Richards and two-time DTWC victor, Brandon Sheppard on the front row. The two had a spirited battle for the lead in the early going until Sheppard pulled away. Richards finished in second with Robbie Scott edging out Boom Briggs at the finish line to claim third. Briggs was fourth.

The second heat race of round two was taken by three-time DTWC winner, Scott Bloomquist who pulled away from Devin Moran to get the victory. Moran placed second followed by Tim McCreadie and Jared Hawkins.

In heat number three of round two, the 2018 Hillbilly Hundred winner, Brandon Overton held off Jason Covert for the win. Covert crossed the line in second with Eddie Carrier Jr. and Gregg Satterlee trailing.

The fourth heat saw the 2018 Boone Coleman Memorial Gator 50 winner, Brandon Fouts pulled the upset defeating Jonathan Davenport. Trailing Fouts and Davenport at the line were Dennis Erb Jr. and Kyle Bronson. Erb passed Bronson at the flagstand to get third on the final lap.

The fifth and final heat of the night saw another home-track racer Shannon Thornsberry pick up the win over 2007 DTWC winner, Chub Frank. Brian Shirley and Ricky Thornton Jr. completed the top four.