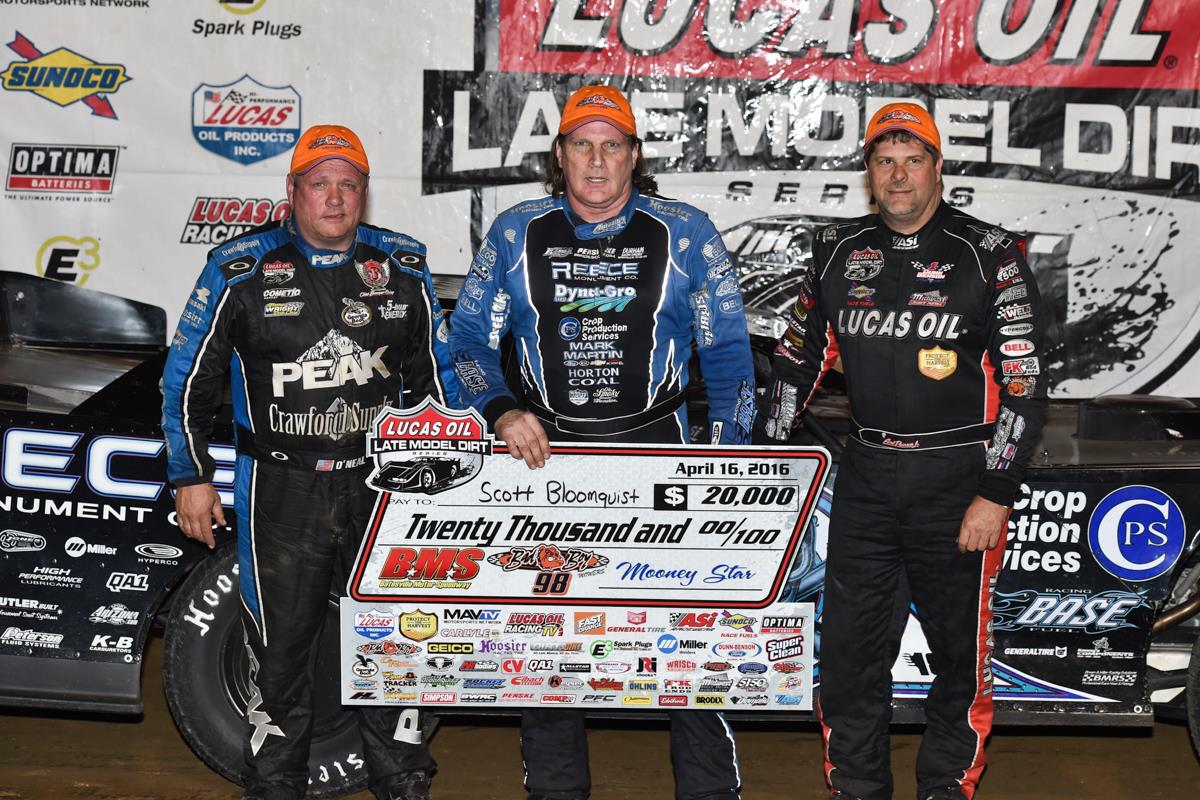 Bloomquist Speeds Away with Bad Boy 98 Win at Batesville

“We got the lead pretty early. The track was little bumpy in one and two tonight. This is a brand new car and it ran well all weekend. The Andy Durham engine also ran great. I want to thank Steve [Martin] at Crop Production Services, Mark Martin Automotive, and Dyna-Gro Seed. We wanted to put on a show for our hometown sponsors and we did,” said Bloomquist who earned the 560th victory of his Hall-of-Fame racing career.

Bloomquist swept the entire weekend at Batesville. He set overall fast time and dominated his heat race on Friday Night to earn to outside front row starting spot for Saturday’s finale.

“We set our own pace once we got the lead. I just wanted to make sure we didn’t overdo it on the tires. The car was spectacular after the restarts, and there were a lot of them tonight. I had a chance to look at the left rear and it looked good. I haven’t seen the other tires, but I am sure they are ok as well.”

“I just wanted to stay in the low to middle, there were a bunch of crumbs up top. You have got to finish the race, so I went a little conservative at the end. I didn’t know how close they were, but I didn’t hear them,” said the winner who took home his second LOLMDS win of the season and his all-time series leading 64th career victory.

Pearson had his best LOLMDS performance of the season with his runner-up finish. “It’s been a tough year, but all the guys on the Dunn Benson Ford team have done a great job on this car. We changed several things today just to get our car a little better than last night. Mooney [Starr] did all he could do to get it smoothed out for us tonight. I think we were better at the start than at the end. The track cleaned up and made it hard to pass. Scott has been tough all year.”

“Hopefully we can build on this. Thanks to Lucas Oil, Lucas Oil Racing TV, MAVTV, Midwest Sheet Metal, and everyone else associated with this team. I was able to get by Davenport, and then the caution came out. I didn’t know with seven laps to go if we had a chance at Scott, but I wasn’t going to give-up, that guy rarely ever makes a mistake. “

O’Neal charged through the field to finish third. “Our team really needed a good run. We have struggled here in the last month or two. We didn’t qualify very well. We passed some cars tonight, and we all got strung out in the top five for a while. We stayed consistent and that was what was important. To get a top three is big for the Peak Antifreeze and Motor Oil/ CBR Team right now because to run in the top three against these guys, you have done something. But we want to win and if you stay consistent its gonna happen sooner, rather than later.”

In preliminary action, Scott Bloomquist set the overall Miller Welders Fast Time (Group B) amongst the 45 entrants, with a lap of 13.702 seconds. Wendell Wallace set the fastest time in Group A with a time of 13.813 seconds. Wendell Wallace, Jonathan Davenport, Scott Bloomquist, and Jared Landers won their respective heat races. Chris Brown and Austin Rettig won their respective B-Mains.