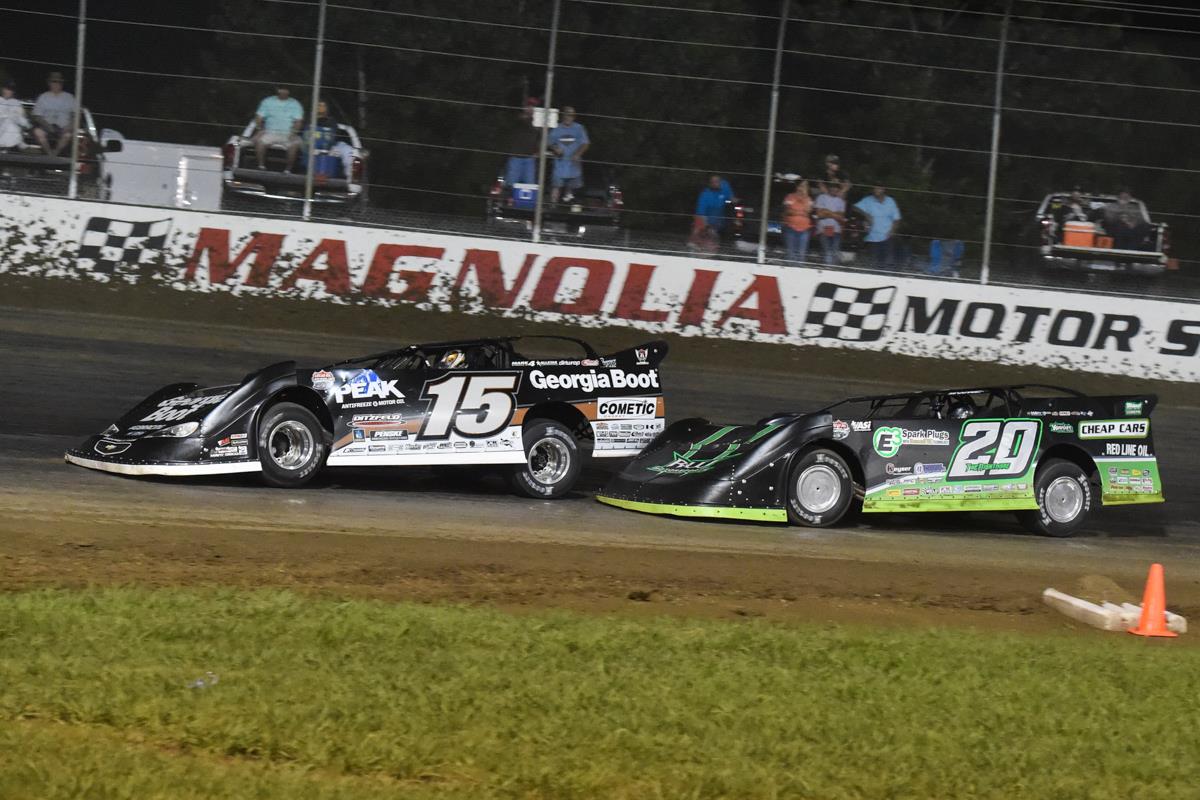 It was Lanigan’s first series win since September of 2013, when he won a preliminary at the Knoxville Nationals. Owens finished second, followed by pole sitter Brandon Sheppard, Scott Bloomquist, and Jared Landers.

Lanigan debuted a new Georgia Boot/Peak Antifreeze/ Club 29 Race Car for Clint Bowyer Racing and kept a steady pace during the first-half of the race before gradually picking off the top five in front of him during the caution-free 60 lap feature.

“We saved our tires there early on. My car really came on. We built this piece this week. When we hot lapped here on Thursday night it was really in the ground. I’d like to thank Clint and Casey Bowyer for giving me this chance,” said the 46-year-old, who was making his first appearance at the track in ten years.

Lanigan; in his first full season running the Lucas Oil Late Model Dirt Series for Clint Bowyer Racing; moved into second on lap 34 overtaking Landers for that position. He then tracked down Owens in heavy lapped traffic using the inside lane of the track while Owens stayed up against the wall.

“I think we have one of the best crews out there working on these cars, Anthony, Cory, and everybody else at the race shop. Like I said, I can’t thank those guys enough. We can definitely build on this. I have told these guys all year, we need to be in the ground. We have had a lot of wheel spin this year. We changed a lot on the cars this week and it definitely showed here tonight.”

Owens had another podium finish in the R&W Motorsports/E3 Spark Plugs/Barry Wright Race Cars number 20. He led from lap four until he was overtaken by Lanigan on lap 49.

“I stayed up on the topside too long”, said Owens. “The bottom started coming into it and he [Lanigan] had a run on me and I couldn’t hold him off. I was trying to clear that last lapped car and he cut in front of me and it just killed my momentum. We had a good car here tonight. Congratulations to Darrell and his crew. They deserved the win. We will hopefully build off of these finishes for the rest of the year.”

Sheppard in another strong run for the Best Performance Motorsports team came home in third. “I think we had a pretty good car all night long. Both Darrell and Jimmy had good cars tonight. I moved back up to the top and was gaining on those guys. I had a pretty maneuverable car. We definitely made some good strides tonight,” said last year’s LOLMDS Rookie of the Year.

In preliminary action, Jared Landers set the overall Miller Welders Fast Time (Group B) amongst the 45 entrants, with a lap of 13.482 seconds. Brandon Sheppard set the fastest time in Group A with a time of 13.768 seconds. Brandon Sheppard, Jonathan Davenport, Jared Landers, and Jimmy Owens won their respective heat races. Jake O’Neil and Ronny Lee Hollingsworth won their respective B-Mains.