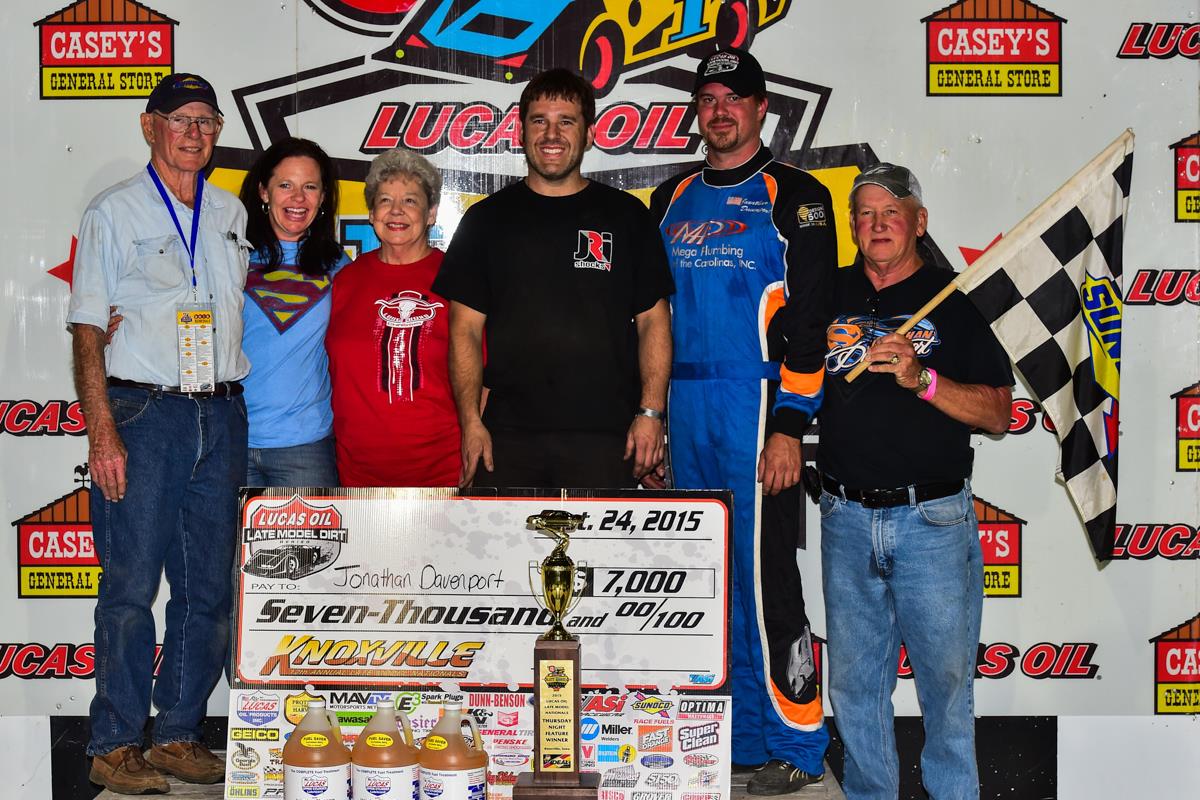 Davenport led the first 19 laps of the race until Owens passed him for the top spot on lap 20. Davenport regained the lead on lap 24. Owens finished second to Davenport followed by Don O’Neal, Earl Pearson Jr., and Chris Brown.

“Lapped traffic is so tough here sometimes,” said Davenport, who recorded his 20th overall feature win of the season. I can’t thank Lee Roy Rumley enough for this strong engine. On this big of a track, we need all the horsepower we can get. The track was super-fast tonight. We could run anywhere on it.”

Last year Davenport won on one of the preliminary night events at Knoxville. This year he comes in as a heavy favorite to win the finale this Saturday Night. “We don’t look at it that way as being a favorite. We just come here to do our jobs, and for most of the year it has been a successful approach. It feels good to win here, but this is just the first night, and everybody else is stepping up their game.”

“I want to thank TS Crane Service, Longhorn Chassis, Sundance Services, Sundance Flowback Well Testing, Mega Plumbing of the Carolinas, JRi Shocks, and Bryson Motorsports for all of their support this year. It’s been in incredible year so far!”

Owens in the Bryan Rowland, Widow Wax, and Club 29-Ford was pleased with his runner-up position. “Did you see that I passed him [Davenport]? Not a lot of people have been able to pass him this year. We had a really good hot-rod tonight. The crew keeps working really hard. I thought maybe tonight we were going to be able to break through, but it’s a good start to the weekend.”

O’Neal is a former Lucas Oil Late Model Knoxville Nationals winner and came home in third after starting seventh. “It’s a much better start to the weekend than last year. I want to thank everybody at Clint Bowyer Racing, Peak Antifreeze and Motor Oil, Crawford Supply, Lance and Barry Wright, and a special mention to my crew chief Jeremy Justice, who is back home recovering from injuries that happened just a few weeks ago.”