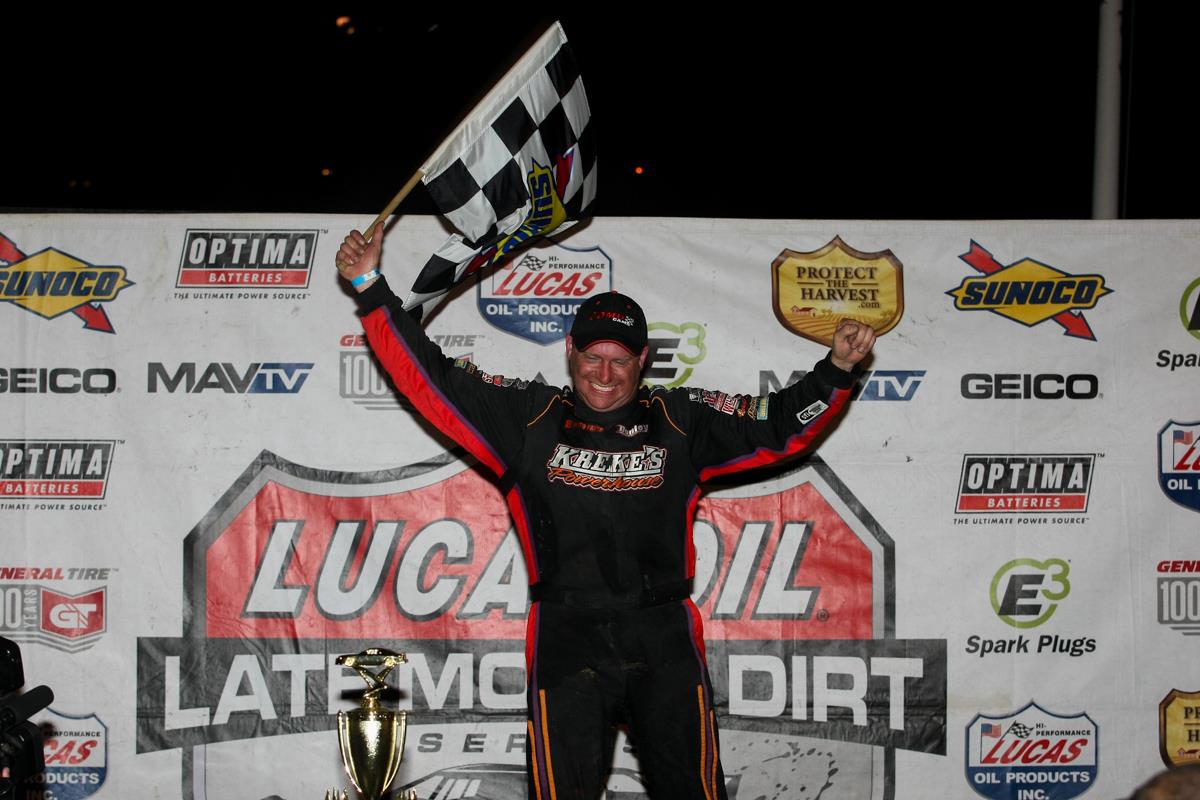 LOCUST GROVE, AR (August 15, 2015) – Shannon Babb charged from the 13th starting spot to take the lead on lap 85 and go on to win the 23rd Annual COMP Cams Topless 100 presented by Crop Production Services. Chris Brown led the first 84 laps before yielding the lead to Babb. Babb then held off Mike Marlar to take the $40,000 victory on Saturday night at Batesville Motor Speedway.

Trailing Babb and Marlar to the finish line were Dale McDowell, Brown, and Brandon Sheppard.

“What a great car we had,” said Babb who won the event for the second time in his career. “I knew at about lap 60 we were going to be a factor towards the end. The car just kept getting better and better. We had some interesting restarts with Scott [Bloomquist], he and I went back-and-forth until I was finally able to get by him.

“I caught Brown there in traffic, and once I cleared him I knew we would be hard to beat. We had some trouble with a few lapped cars, but that’s what happens sometimes. The track I thought was really good all weekend long. We missed practice on Thursday Night. But ever since we unloaded on Friday the car has performed awesome.”

“I would like to thank Ed Petroff for everything he has done for me. He got me this new Club 29 car and we started racing it in mid-July. We had a new Clements motor in there tonight and thanks to Glen Clements for building such a strong engine. Donley Trucking has been a big help to us as well.”

“It’s always fun to win one of these crown jewel events; first off the prestige of winning and secondly it’s a real good payday. Davenport has won every one of them this year; he had some bad luck tonight. It’s about time somebody else won one of these,” said a smiling Babb. “I also want to thank CJI Piping from Texas, C&E Industrial, Mudd’s Repair, Kreke’s Powerhouse, Printworx, B Auto Parts, Kuebler Oil and all the fans for coming out to watch us race,”

Brown vaulted to the lead from his outside front row starting position and was challenged early by Jared Landers and Jimmy Owens. Bloomquist then took his turn to track down the Texan. Babb had moved into second by lap 66 and slowly tracked down the Texan.

Marlar and McDowell secured podium finishes in the closing laps. Marlar was able to close in on Babb during the final five laps, but never could pull alongside the veteran driver.

“We are tickled to death with this finish,” said Marlar. “This Capital Race Car has just been super. They are a great bunch of people to work with. The car just seems to fit my driving style better than most. I have to thank Ronnie Delk and Delk Equipment Sales for putting us in such great equipment. We were third last week at Florence and then to come home second here tonight, it just shows how good this team is.”

McDowell, another former winner of the race came home third. “We weren’t particularly good early on. The tires started to come into it over the last half of the race. We were just rolling along there on the bottom and everybody else was running the middle to top. At the end we had one of the fastest cars on the track. Congratulations to Shannon on the win, he deserved it.”