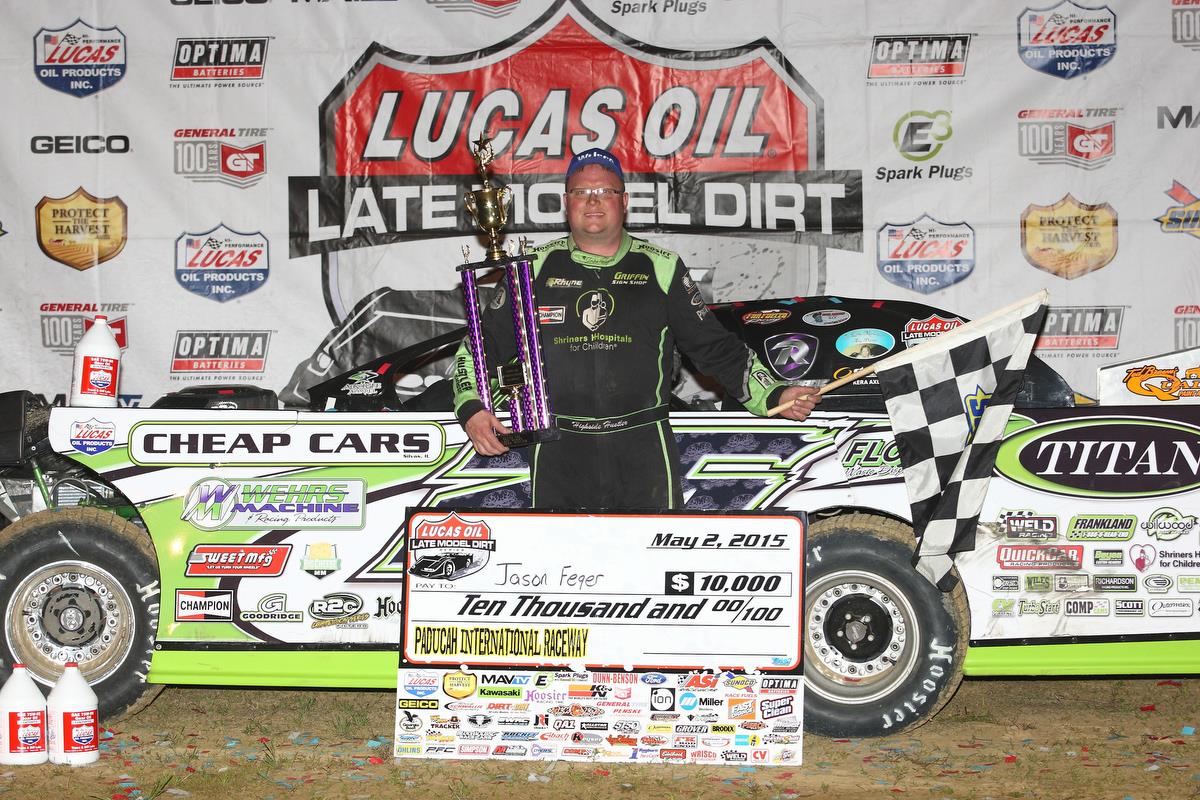 PADUCAH, KY (May 2, 2015) – Jason Feger had to fight off three other drivers to win the Lucas Oil Late Model Dirt Series event on Saturday Night at Paducah International Raceway. Feger’s win duplicated his victory from a year ago in the “Spring Showdown.”

Man I don’t know what to say,” said Feger. “I just drove it as hard as I could. I knew Davenport couldn’t keep up that pace without something happening and it did.”

Jonathan Davenport had led the first 18 laps of the race dominating the field until he developed a right rear flat tire forcing him to pit for a tire change.

Feger held a comfortable advantage as the white flag waved. O’Neal made one last effort on the final circuit, but came up a few feet short. Feger becomes the 10th different winner in 15 Lucas Oil Late Model Dirt Series event in 2015.

“I think the fans saw a great race. I was glad to be out in front. I could peek to the inside and see those other guys there. You can’t run straight down the straightaways here and with the high-banks it gets pretty wild out there.”

“I thought a few times we were going to wreck,” said Feger commenting on his contact with O’Neal. “I was sideways down the front stretch at one time. But we both were racing hard and things like that will happen.”

O’Neal’s second place finish concluded back-to-back nights of top five finishes Clint Bowyer Racing #5. “It was good points night. We run hard for the lead, there wasn’t much give and take, then you had little Bobby [Pierce] in there, man what a race that was. I want to thank everyone at Clint Bowyer Racing, my crew and my sponsors: Peak Antifreeze and Motor Oil, Crawford Supply, Georgia Boot and Cometic Gasket.”

Owens in the Rowland Racing, Widow Wax Car Care Products-sponsored entry was pleased with his third place finish. “It feels good to get a top three here. Our car stayed glued on the bottom for most of the race. Those guys in front of me were jostling all over. It was a great race to watch.”

In preliminary action, Jonathan Davenport set the overall Miller Welders Fast Time (Group B) amongst the 30 entrants, with a lap of 15.349 seconds. Jimmy Owens set the fastest time in Group A with a time of 15.395 seconds. Jason Feger, Scott Bloomquist, Jonathan Davenport, and won their respective heat races. Chris Simpson and Chris Brown won their respective B-Mains.