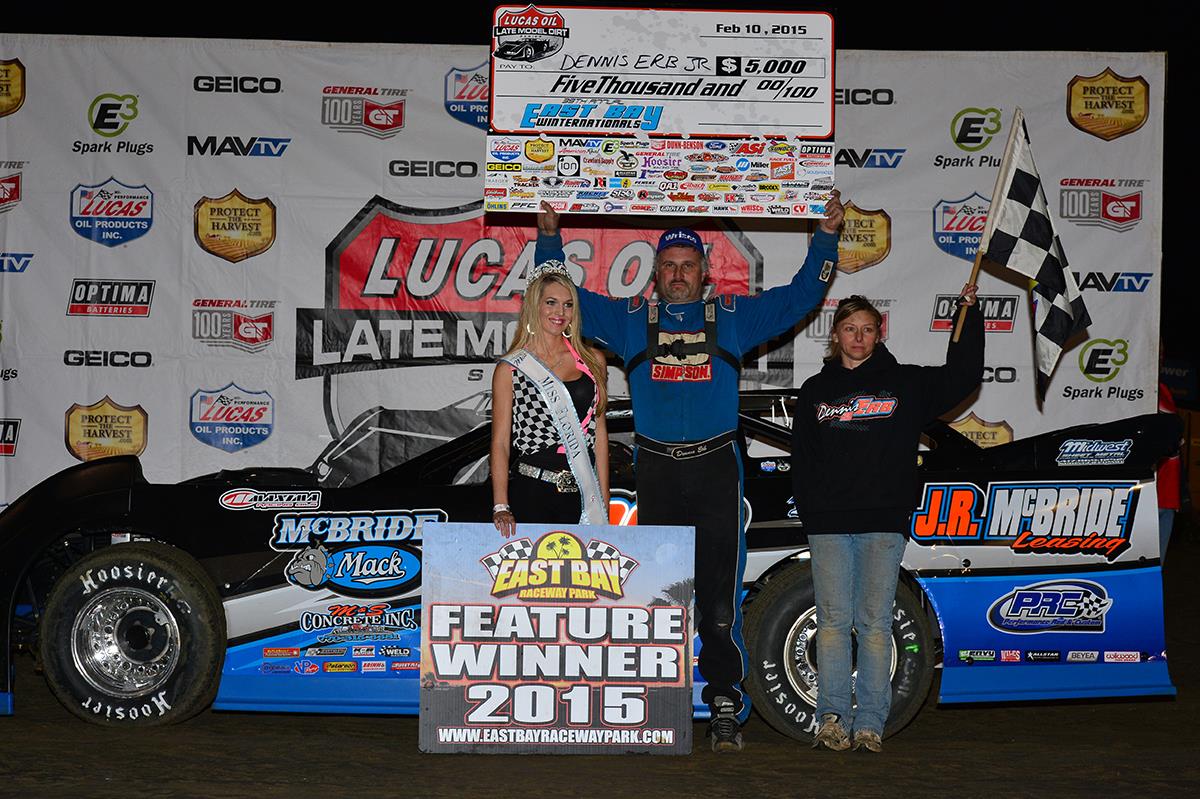 TAMPA, FL (February 10, 2015) – Dennis Erb Jr. took the lead on lap ten and won a thrilling feature event on the opening night of the Lucas Oil Late Model Dirt Series Winternationals at East Bay Raceway Park. Erb’s seventh career win at “The Clay by the Bay” was hard fought early on as he and Billy Moyer had a back and forth battle for the lead.

Earl Pearson Jr. came home second after skating by Moyer on lap 14. Moyer then held off a furious late-race rally from Bobby Pierce to take third. Pierce started 16th on the grid and wound up fourth with Brandon Sheppard coming home in fifth.

“It feels good to get the win on the first night. It seemed like no one could get any traction out there. Turns three and four were slick and one and two were hammer-down. I guess we were just lucky to pull away from those guys. Billy [Moyer] and I had a really good race at the start. I didn’t know what was going on behind me. All I know is that turn four was hard to get out of. The fans definitely saw an exciting race, but our cars were a handful to drive,” said Erb.

The race for the lead between Erb and Moyer was spectacular in the first six laps of the race. Each led three circuits, and then Moyer led three more until Erb wrestled the lead away from him for good on lap ten.

Pearson was happy with his runner-up finish. “Our car was good all night; these hard tires are something to deal with on this race track. It was a pretty good race, and trying to get traction was difficult. I want to thank Lucas Oil Products and Dunn-Benson Ford. We will be back tomorrow night and give it another shot.”

Moyer, the winningest Late Model driver in Winternationals history [with 23 victories] was pleased with his third place car. “As it turned out, Dennis had the best car. My car kept jumping in-and-out of gear; I am not making excuses, it just happened. We just have to figure out these tires and go from there. We have had a good start to speedweeks and we hope to continue that momentum here tomorrow night,” said the driver the Henderson Motorsports and Garnant Family Longhorn Chassis.