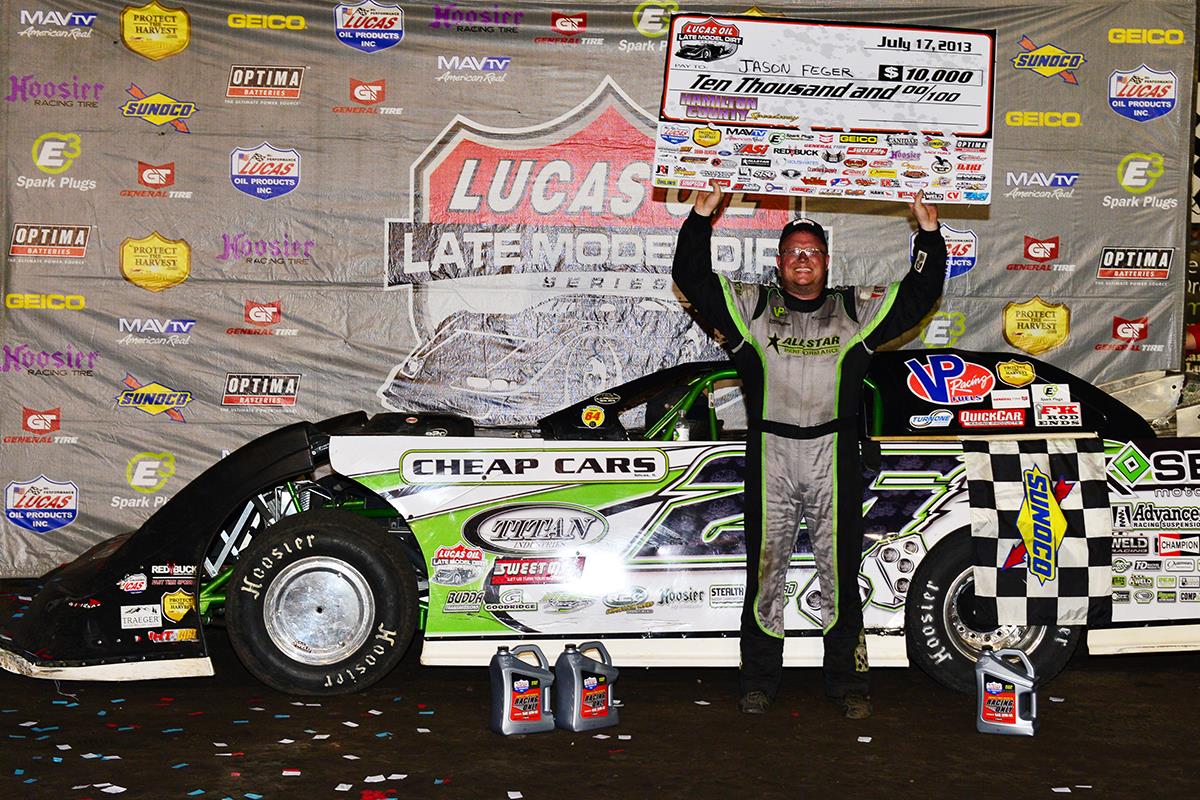 In front of a capacity crowd, Feger cruised to the victory after passing Steve Francis on lap 15 and pulled away in the final laps to become this season’s 14th different winner on the LOLMDS tour. Francis finished second, followed by Earl Pearson Jr., Don O’Neal, and Brian Birkhofer.

“It feels great to finally get a Lucas Oil Series win. We have won in a lot of different series, but to get this one is really special. To beat such a talented field of drivers like Francis, [Don] O’Neal, [Billy] Moyer, and [Scott] Bloomquist, we couldn’t ask for a better night as a team. After having a little bad luck recently, we were due for a good finish. We have been getting on each other’s nerves recently, but the crew has worked their tails off, and this win should take the pressure off of us,” stated Feger in Lucas Oil Victory Lane.

“When I saw them watering the topside of the track before the feature, I was really salivating at the chance to run up there! The car was fast all night, starting from the time we unloaded it. I had confidence that we could get to the front early and stay there. Steve [Francis] and I diced through traffic, I tried a couple of different lines, and was finally able to get by him on the outside,” continued a jubilant Feger. He is driver of the Cheap Cars, Box Seat Productions, Rhyne Competition Engines, Bob Pierce Race Cars entry.

Francis was at the helm of the Bowyer Dirt Motorsports, Georgia Boot-sponsored Barry Wright Race Cars #15. He scored his second runner-up finish in a row and narrowed the series points lead to a mere 20 points behind John Blankenship.

“Congratulations to Jason on the win! I was hoping the track would stay racy all night. The first part of the race we could run anywhere on the track, then it started taking some rubber, and we couldn’t make up any ground on Feger after that. Thanks to everyone on both Bowyer Dirt Motorsports teams for working so well together,” stated Francis.

Earl Pearson Jr. finished a solid third place finish on Wednesday Night. His Longhorn Chassis Chevrolet is owned by Bobby Labonte Racing, and is sponsored by Lucas Oil Products and MAVTV American Real. “We got here late tonight, but we were able to set fast time in Group A and win our heat. The car was strong for the entire night. Feger and Francis had a good race in front of me and we were just a tick off from them, but we will certainly take this finish and head to Nebraska!”

The Lucas Oil Late Model Dirt Series will round out its July Midwest swing with the Silver Dollar Nationals at I-80 Speedway in Greenwood, NE. The event will include a practice session on Thursday, July 18. There will be two rounds of heats on Friday night, July 19. Capping off the trip to I-80 on Saturday, July 20, there will be B-Mains and the 80-lap main event. For more information, visitwww.i-80speedway.com.