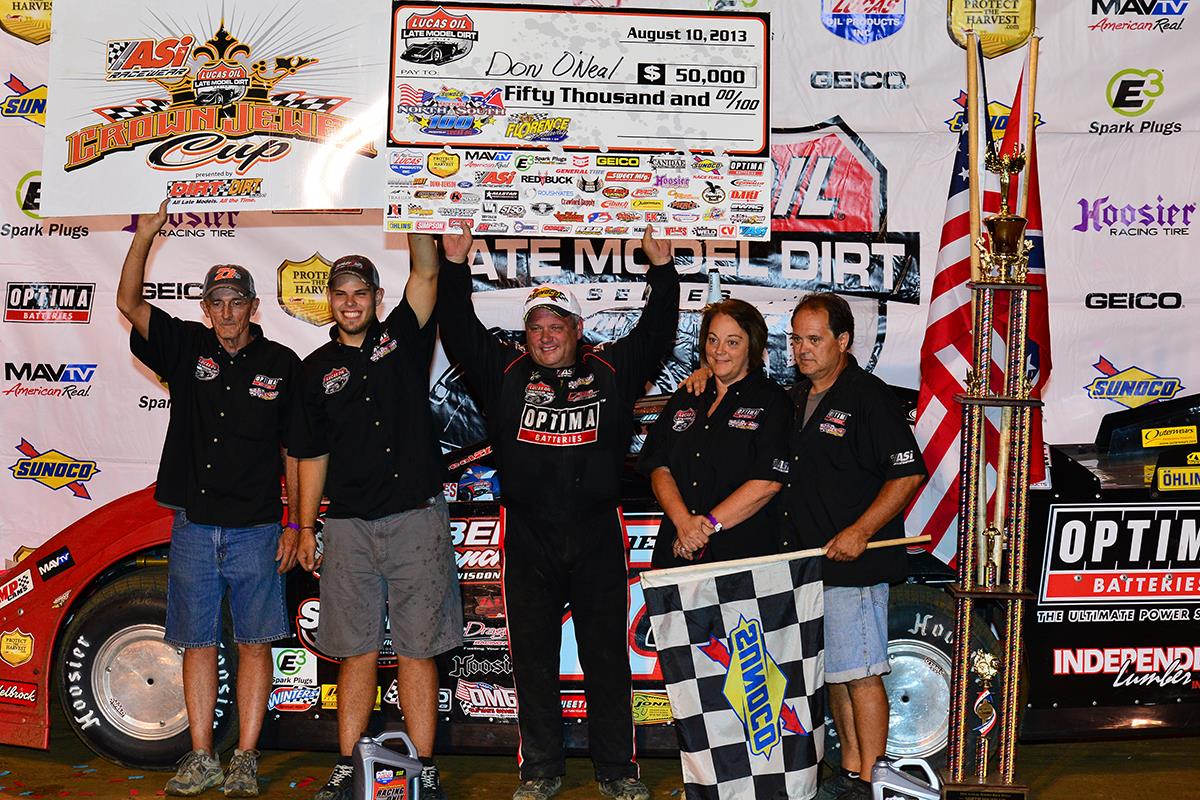 “I have to thank the fans for staying around tonight. I hope we put on a great show for everybody! Our car was better up near the wall than in the black. The track was fantastic all night long,” said the winner.

O’Neal fought off the challenges from John Blankenship and Steve Francis early on as several caution flags kept the field bunched up. Blankenship was O’Neal’s only real competition for the first part of the race. Later in the race, McCreadie tried to run down O’Neal but it went to no avail.

On lap 96, Blankenship was running third and slowed dramatically with a broken rear end. Greg Johnson was just outside the top five and crashed into Blankenship; ending a sold run. On the restart, O’Neal pulled away from McCreadie to take his 32nd career LOLMDS victory.

“I have to thank Optima Batteries, Seubert Calf Ranches, Superior Cleaning, Tarpy Trucking, Independence Lumber, and Ohlins. Of course I also have to thank Jay Dickens Racing Engines, I have been with Jay a long time and this engine was strong all night!”

McCreadie was complimentary of O’Neal afterwards. “To run against Don and the rest of these guys is awesome. I mean they race you hard, but they race you clean! I had a heck of a race with Blankenship and he never gave up! I want to thank the fans for coming out this weekend! This is the best we’ve run here, and we will definitely be back,” said the driver of the Sweeteners Plus, Warrior Race Cars #39.

McDowell charged through the field after starting 16th to finish third. “Man that was a great race! Our car was strong early on, and then we kind of leveled out. To run in the top three against these guys in a car we don’t normally drive says a lot about our team.”

The Lucas Oil Late Model Dirt Series will return to action next weekend with the COMP Cams Topless 100 at Batesville Motor Speedway in Batesville, AR. On Thursday, August 15th, there will be an open practice session for competitors. On Friday night, August 16th, there will be RED BUCK Time Trials and full heat races. On Saturday, August 17th, there will be B-Mains and the 100-Lap main event. For more information, log onto www.batesvillemotorspeedway.net.