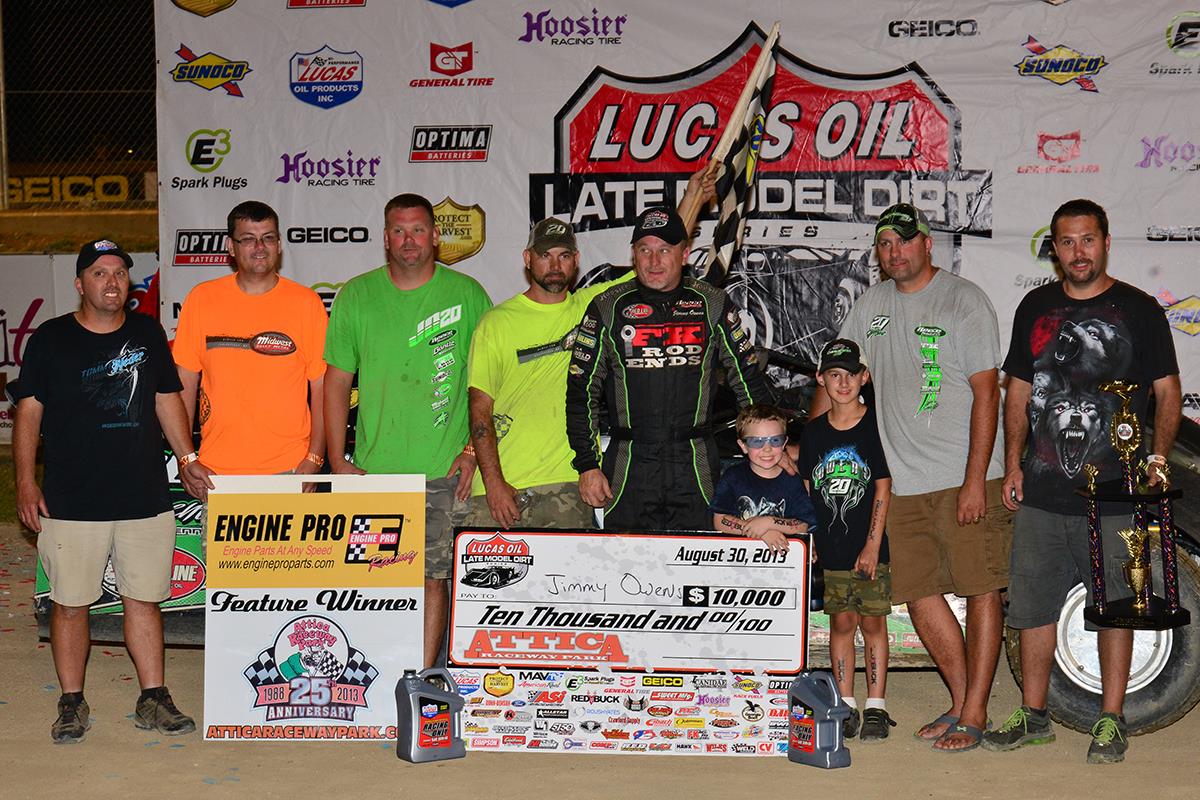 ATTICA, OH (August 30, 2013) – Jimmy Owens continued his stronghold on the series with his 7th victory on Friday Night at Attica Raceway Park. He took the lead on lap six and led the rest of the way, pocketing $10,000 for the win.

“I have to thank all these great fans for coming out tonight! This is our first time here, and we really like this place,” said Owens, who started third in the race. “We had a super car all night long! I think the first two finishers picked the same tire compound to run, and it paid off.”

Owens made a daring move to the inside of the track on the opening lap to take the lead from Russ King and Birkhofer. King fought back and took the lead from Owens on lap three and led the race for three circuits until Owens got back by him. King then held the second spot, using the top groove on the racetrack. Birkhofer got by King for second on lap 12 and stayed there for the remainder of the race.

“I have to thank my car owner Mike Reece, Reece Monument Company, Sunoco Race Fuels, Red Line Oil, Gantte Appraisals, Midwest Sheet Metal, and all of my other sponsors for making this possible. It is a great way to start the weekend and hopefully we can go to Portsmouth and I-77 with the same results.”

Birkhofer was in the ASi Racewear, MB Customs Chevrolet and was racing for the first time in three weeks after breaking his hand last month. “We didn’t have anything for Jimmy tonight; he was too strong. To come here after being off for so long and to run well with these guys felt really good. I will probably sleep pretty well tonight. It’s going to be a long weekend!”

Earl Pearson Jr had a solid run tonight after a couple tough races last week.“It feels good to have a Top-3 finish here. We have only been here once before and that was nine years ago. The crew has worked hard over the last two weeks and we have had a lot of misfortune, so we needed a good run,” said the driver of the Bobby Labonte, Lucas Oil Products, Longhorn Chevrolet.

In preliminary action, Brian Birkhofer set the overall time (Group A) amongst the 31 entrants, with a lap of 14.750 seconds. Jeff Babcock set the fastest time in Group B with a time of 14.949 seconds. Brian Birkhofer, Jimmy Owens, Russ King, and Earl Pearson Jr. won their respective heat races. Jon Henry won the B-Main.

The Lucas Oil Late Model Dirt Series will continue its Labor Day Weekend triple-header on Saturday, August 31st, at Portsmouth Raceway Park in Portsmouth, OH for the Pepsi 50 River Days Rumble. Rounding out the weekend, on Sunday, September 1st, will be the Hillbilly Hundred at I-77 Raceway Park in Ripley, WV. For more information on these tracks, please log on to: www.portsraceway.com and www.racei77.com.