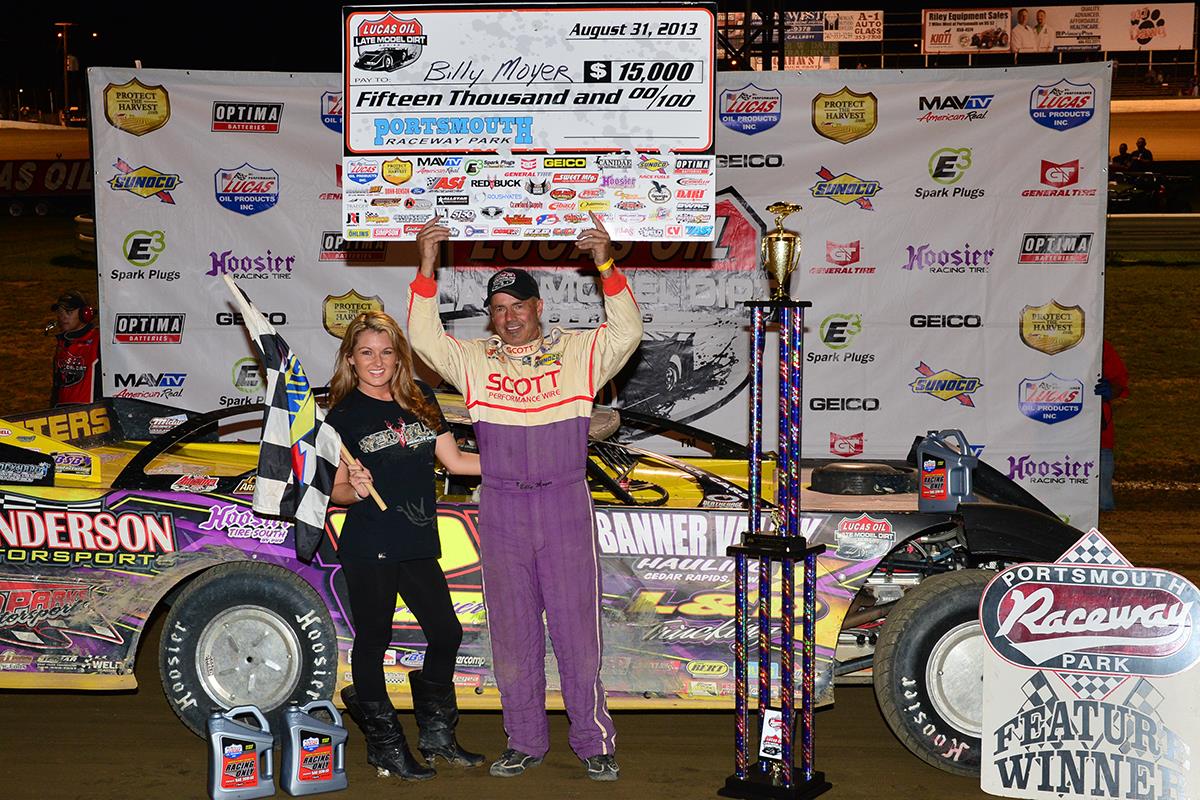 Moyer the Man in Pepsi 50 River Days Rumble at Portsmouth

PORTSMOUTH, OH (August 31, 2013) – It has been several years since Hall-of-Famer Billy Moyer last visited Portsmouth Raceway Park. After Saturday night, he can put his name in the hat as a contender for the Dirt Track World Championship at PRP in October. He led all the way as he captured the Pepsi 50 River Days Rumble sanctioned by the Lucas Oil Late Model Dirt Series. Moyer collected $15,000 for his win tonight.

“You have to give a big thanks to the track and Lucas Oil crew for getting this race in! They had some heavy rain this morning. The track was great all night and it had three grooves. To beat the rain, you have to take your hats off to everyone involved! We have not run here for several years, and I would say it was probably back in the GVS days that I was here. I certainly hope to be back here in October, going for that $50,000!”

“To beat that 20 car says a lot! He has been on a roll lately! I want to thank all of my sponsors including Henderson Motorsports, Banner Valley Hauling, L&D Trucking, Midwest Sheet Metal, and Clements Racing Engines.” Moyer’s win was the 773rd of his illustrious career and came in his own Moyer Victory Circle ride.

Owens; in the Mike Reece, Reece Monument Company, Bloomquist Race Cars Ford; lengthened his points lead over Francis with his second place finish. “Well everybody knows Billy Moyer is one of the all-time greats, even with the caution flags that kept us bunched up, I had nothing for him! Congratulations to him and his crew, they deserved the win!”

Erb made a late-race rally to pass Bloomquist late in the race to nail down the third spot; his best ever finish at PRP. “Our car was really good at the end, we started passing cars in the last 15 or so laps! I just wish the race would have been 75 laps, we might have had something for Billy and Jimmy! This is the best finish we have ever had here, and we look forward to coming back here in October for the DTWC,” said the driver of the JL Scrap Metals, Bloomquist Race Cars Chevrolet.

In preliminary action, Jackie Boggs set the overall RED BUCK Fast time (Group A) amongst the 37 entrants, with a lap of 14.801 seconds. Mike Marlar set the fastest time in Group B with a time of 15.007 seconds. Doug Drown, Josh McGuire, Billy Moyer, and Jimmy Owens won their respective heat races. Zack Dohm and Scott Bloomquist won their respective B-Mains.

The Lucas Oil Late Model Dirt Series will continue its Labor Day Weekend triple-header on Sunday, September 1st, with the Hillbilly Hundred at I-77 Raceway Park in Ripley, WV. The Hillbilly Hundred is also part of the ASi Crown Jewel Cup presented by DirtonDirt.com. For more information, please log on to www.racei77.com.