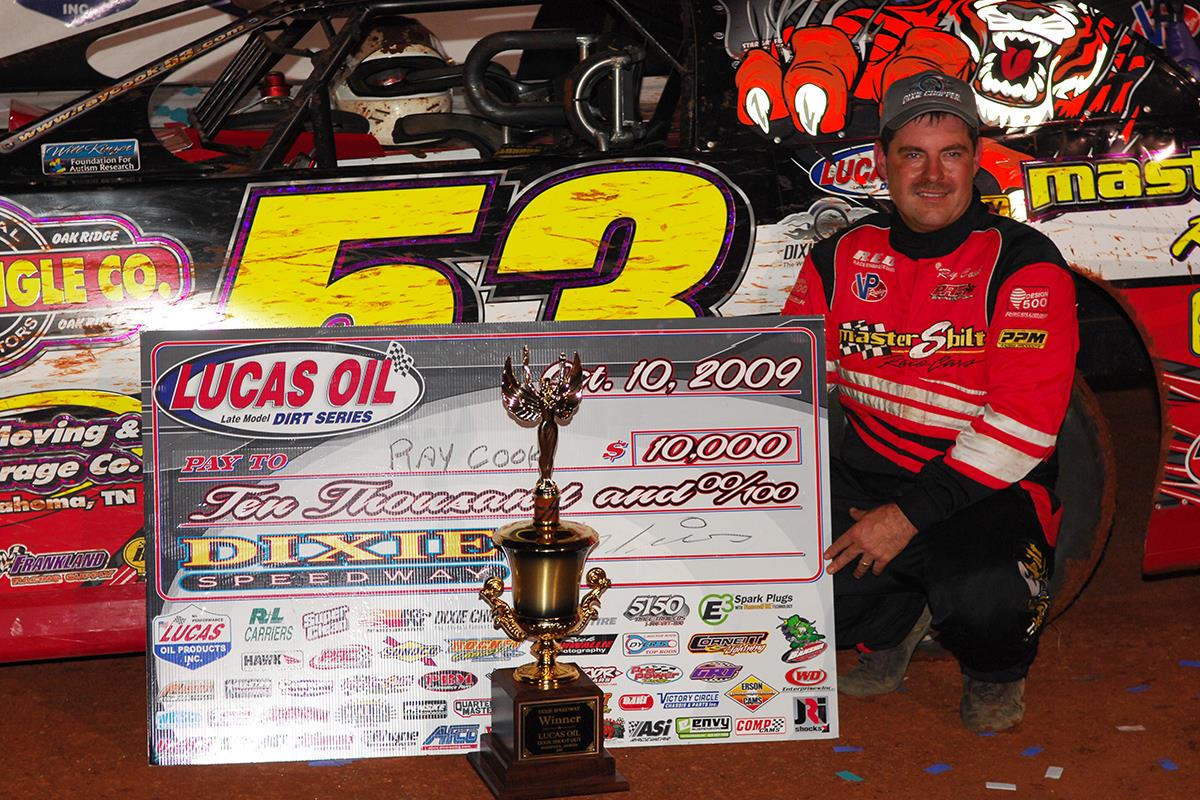 WOODSTOCK, GA (October 10,2009) Taking the lead on lap 23 after starting seventh, Ray Cook of Brasstown, NC led the rest of the way to score his first career Dixie Shootout win on Saturday Night at Dixie Speedway. The Lucas Oil Late Model Dirt Series sanctioned event win for Cook was his fifth this year as he collected $10,000 for the win in the 20th Annual Dixie Shootout, which was sponsored by Coal America’s Energy. Dan Schlieper of Sullivan, WI finished second followed by new track record holder Earl Pearson Jr. of Jacksonville, FL, Clint Smith of Senoia, GA and Jimmy Owens of Newport, TN.

Owens and Smith would start on the front row of the 50 lap event with Smith grabbing the early lead followed by Owens, Schlieper, Tony Knowles and Bub McCool. Cook coming from the inside on row four was on the move early as he passed McCool for fifth on lap two and then a couple of circuits later he was up to the fourth spot around Knowles.

Smith and Owens were setting a quick pace around the D-shaped track as they opened up a three-car length advantage over Schlieper, who was still holding down the third spot. Cook then put the heat on Schlieper passing him for third on lap 14. Cook the quickly chased down Owens and raced side-by-side with him as they crossed the stripe with 15 laps complete.

Cook then cleared Owens for second officially on lap 16 taking over the second spot. With Cook on the move Smith’s lead looked precarious as Cook tracked him down in a matter on five laps which was helped by the first caution of the race for a slowing Skip Arp on the main straightaway. On the restart it was Smith still in the lead, but he had Cook right on his tail and as the two cars crossed the stripe Smith held a scant half a car length lead over Cook who had pulled alongside him.

Cook took the outside route on lap 22 passing Smith for the lead coming off of turn number four. The top five at the half way mark showed Cook in front followed by Smith, Owens, Schlieper and McCool. Cook then stretched his lead out as Schlieper started to hound Smith for second as traffic started to play a role as Cook was starting to be held up.

The second caution on lap 37 for Randy Weaver was a break for Cook as it cleared out cars in front of him for the restart. The green flag restart lasted a mere two laps when Don O’Neal slowed with a flat tire bringing out the third and final caution of the race with eleven laps to go.

The final restart of the race saw Cook hold his lead over Schlieper keeping a three-car length lead with ten to go as a side-by-side battle was shaping up between Smith and Pearson as the pair of number 44 drivers were dueling it out for third. With five to go Schlieper started to cut down Cook’s lead as it appeared the race would finish before Cook would get back into lapped traffic.

In the Lucas Oil Victory Lane, Cook did a quick interview with SPEED Channel who was on hand to tape the event and then did an emotional interview for the crowd. “I have to thank the Good Lord for a good and safe race, Mickey Smith did a whale of a job getting this track ready tonight with all the rain they have had here the last two weeks, it was extremely racy and I hoped the crowd enjoyed the show,” said the 37-year old driver who currently stands sixth in the Lucas Oil Series points standings after 39 events.

“This was Mike Swims’ brainchild and I remember getting an invitation to this race and thought that was pretty neat and he and I became good friends over the years and we all still miss him and I know he was riding along with me tonight and I’m sure he would be proud to have put on a race like we all saw tonight, I have to thank all my sponsors, my car owners, my family who’s here tonight, this is just unbelievable to be standing here in victory lane after winning the Dixie Shootout.”