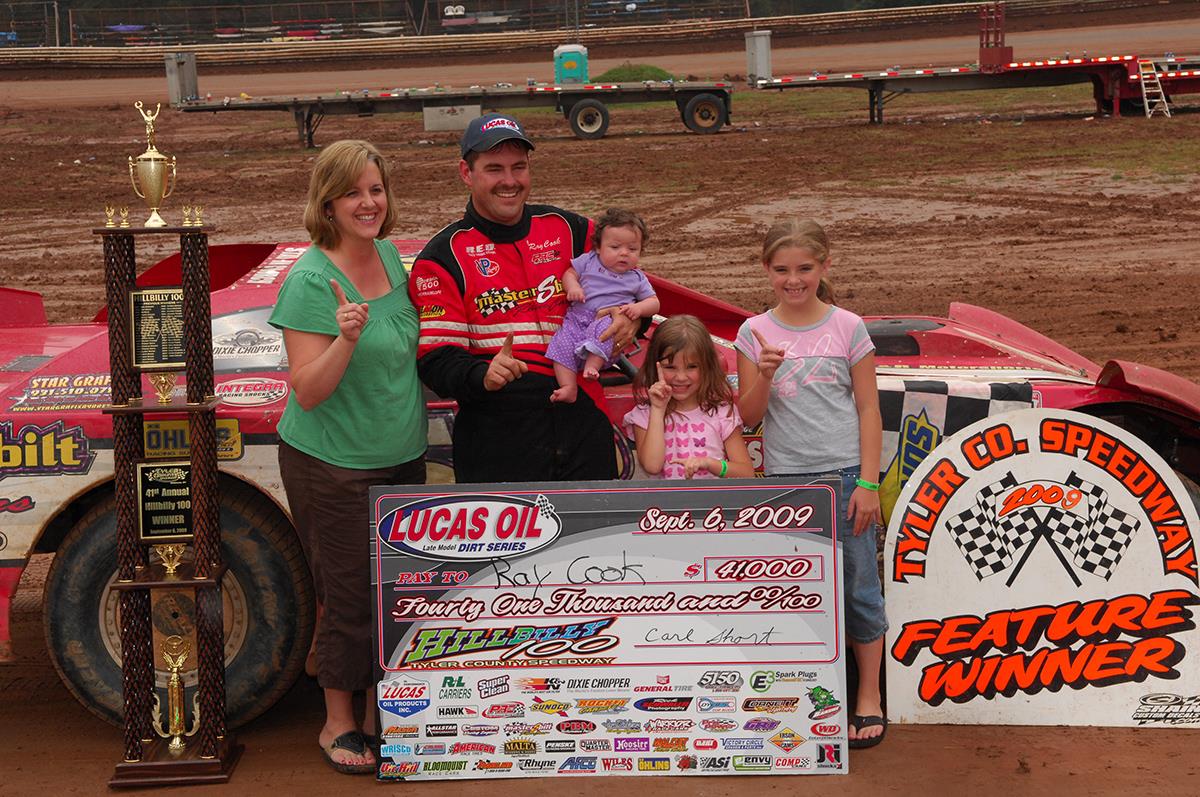 Middlebourne, WV (September 7, 2009) – Ray Cook of Brasstown, NC scored the biggest win of his racing career on Monday afternoon at Tyler County Speedway as he captured the 41st Annual Hillbilly Hundred sanctioned by the Lucas Oil Late Model Dirt Series. Cook won $41,000 after winning his fourth series race of 2009 in a race that was postponed on Sunday Night after 39 laps were run because of rain. Earl Pearson Jr. of Jacksonville, FL chased Cook over the final 61 circuits to finish second followed by Scott Bloomquist of Mooresburg, TN, Jimmy Owens of Newport, TN and Dale McDowell of Chickamauga, GA.

Current Lucas Oil Late Model Dirt Series Championship Points leader Scott Bloomquist and Josh McGuire started on the front row as McGuire took the lead at the drop of the green flag. With lightning in the background and impending rain on its way McGuire led Bloomquist, Jimmy Owens, Bart Hartman and Terry Casey to the stripe on the first lap. A three-wide battle for fourth between Casey, tenth starting Earl Pearson Jr. and eighth place starting Ray Cook as Pearson and Cook started their ascent to the front.

With McGuire holding a steady pace out in front he started to enter traffic by lap 14. Bloomquist, Owens, Pearson and Cook started to close on McGuire as an exciting race for the lead was shaping up. Pearson then made up a lot of ground on the frontrunners as he was using the very bottom of the race track as he passed Owens for third on lap 16 and a circuit later he was by Bloomquist for second.

Pearson then was all over McGuire in the race for the lead as Pearson took the point on lap 21 from McGuire at the same time as Cook moved by Owens for fourth on the same lap. Cook then hounded Bloomquist and McGuire in heavy traffic passing both of them on lap 28 to gain the second position.

The first caution of the race came out for Don O’Neal who broke a driveshaft on lap 32. On the restart Pearson held the point, but a lap into the restart Cook would pass Pearson for the lead. Cook and Pearson then proceeded to put some distance between themselves and the rest of the field.

At this point a light drizzle would begin to fall and has the cars completed lap 39 a caution for Freddy Smith who had stopped on the inside of the backstretch. While under caution the rain started to fall heavier and it would force series and track officials to send the cars to pit area while they waited out the precipitation.

Officials waited for 90 minutes and as the rain continued the call was made to postpone the rest of the event until Monday afternoon with Cook leading followed by Pearson, Bloomquist, Steve Shaver and McGuire.

When the race resumed on Monday afternoon Cook would pick up where he left off with Pearson on his heels followed. The race would go two green flag laps until Dan Schlieper slowed in turn four after slipping out of the groove as he ended up stopping coming off the fourth corner.

When the race went green again for the restart Steve Shaver who was fourth contacted the tire barrier which was protecting the pit ext heading into turn three causing damage to his car as Josh McGuire had nowhere to go and got was also involved. Both cars were eliminated from competition.

Cook led the next restart with Pearson, Bloomquist, Owens and Casebolt the top five drivers. Cook was stretching out his lead over Pearson and with 60 laps complete he looked to be control of the race as Casebolt passed Owens to move into the fourth spot.

The fourth caution of the race would come out with 65 laps scored as Ricky Williams stopped on the backstretch. During the caution for Williams Casebolt headed pitside with smoke billowing out of his car as he gave up his fourth running position.

Cook again the blasted off from the field on the restart with 35 laps remaining as he and Pearson entered lapped traffic with 87 laps complete. Pearson was all over Cook for the lead and as the two battling it out for the lead both Bloomquist and Owens was closing on the leaders.

Terry Casey, who was running fifth slowed coming off of turn four, brought out the final caution of the race with five laps to go. This set up a five lap dash to the finish and it was all Cook as the 37-year-old driver went on for his fifth career Lucas Oil Series victory and the richest of his career.

In the Lucas Oil Victory Lane, Cook thanked his car owners Danny Dishman and Ronald Ivey who fields the D&R Racing Team out of Kingston, TN. “I have to thank God for giving us a good safe race, I want to thank MasterSbilt Race Cars for their help this new style car has been great to work with, Race Engine Design for the motor help and American Racer Tires, this car was hooked up all race long and I want to thank my wife, Peggy for being here with our three daughters, I’m glad to join the list of winners for this race, it’s quite an honor,” said Cook who biggest win before now was when he won $34,000 for winning the Show-Me 100 at West Plains Motor Speedway in 2000