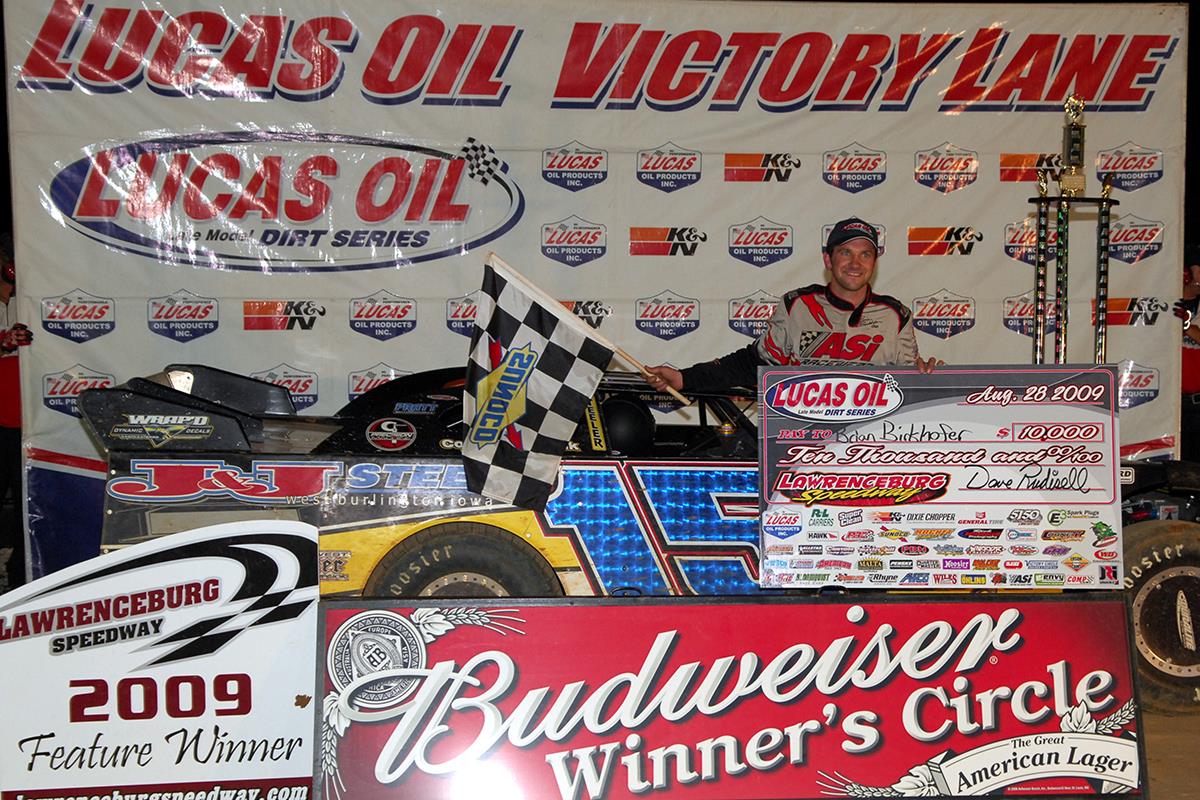 LAWRENCEBURG, IN (August 28, 2009) - Taking the lead with two laps to go Brian Birkhofer of Muscatine, IA went on to score his fourth Lucas Oil Late Model Dirt Series win of 2009 on Friday Night at Lawrenceburg Speedway. Birkhofer passed Jeep VanWormer of Pinconning, MI with two laps to after VanWormer had led the entire race up until that point as Birkhofer denied VanWormer his first ever Lucas Oil Series win. VanWormer then jumped the cushion on the final lap as Birkhofer pulled away for the $10,000 victory. VanWormer finished second followed by Matt Miller of Waterville, OH, Scott Bloomquist of Mooresburg, TN and Eddie Carrier Jr. of Salt Rock, WV.

Miller and VanWormer started on the front row of the 50 lap main event as VanWormer took the lead at the start of the race. Miller, Scott James, Zack Dohm and Bloomquist were running in the top five with a lap scored. The first caution flew after one lap was complete for Steve Casebolt who went pitside.

When the race resumed VanWormer held the point with pressure from Miller and James as the top three drivers had opened up some distance between themselves and the rest of the field. Carrier then charged up to fourth using the bottom groove of the race track as he started to put the heat on James, who was running third.

James and Carrier would go back and forth for a few laps with Carrier moving into third place. Carrier then moved closer to the two frontrunners as VanWormer and Miller saw their lead erased in a hurry as Carrier was moving fast on the bottom of the track.

The second caution came out with 19 laps scored as Jimmy Owens and Terry Casey came to a halt in turn four. Owens, who entered the race second in the Lucas Oil Series points pitted and returned to the lineup on the tail. The restart would see VanWormer maintain his lead with Miller riding his bumper around the top of the track.

James would slow on lap 36 with a vibration as he went pitside giving up his third spot the same time Ray Cook left with a broken driveshaft. The last restart of the race would see Birkhofer work the inside of the track to perfection as he passed Miller for second on lap 41. Birkhofer then set his sights on VanWormer who had a three car length lead with five to go, but Birkhofer chopped into VanWormer's lead.

Birkhofer then edged ahead of VanWormer with two laps to go and as the two took the white flag they were even at the flagstand. VanWormer then jumped the cushion in turn two as his hopes for his first career series win went by the wayside as Birkhofer headed home to the checkered flag for his fourth series win of 2009 in his MB Customs Chassis/Pro Power Engines #15B.

In Lucas Oil victory lane Birkhofer said running the bottom obviously made the different in his win. "I am not really use to running up the cushion as much as Jeep and Matt were, our car ran better on the bottom, there was enough moisture down there and we got good traction and I didn't think we could catch Jeep, but with two to go I was able to get pull even with him, man I can't thank the crew enough for their help and thanks to the fans for coming out tonight."