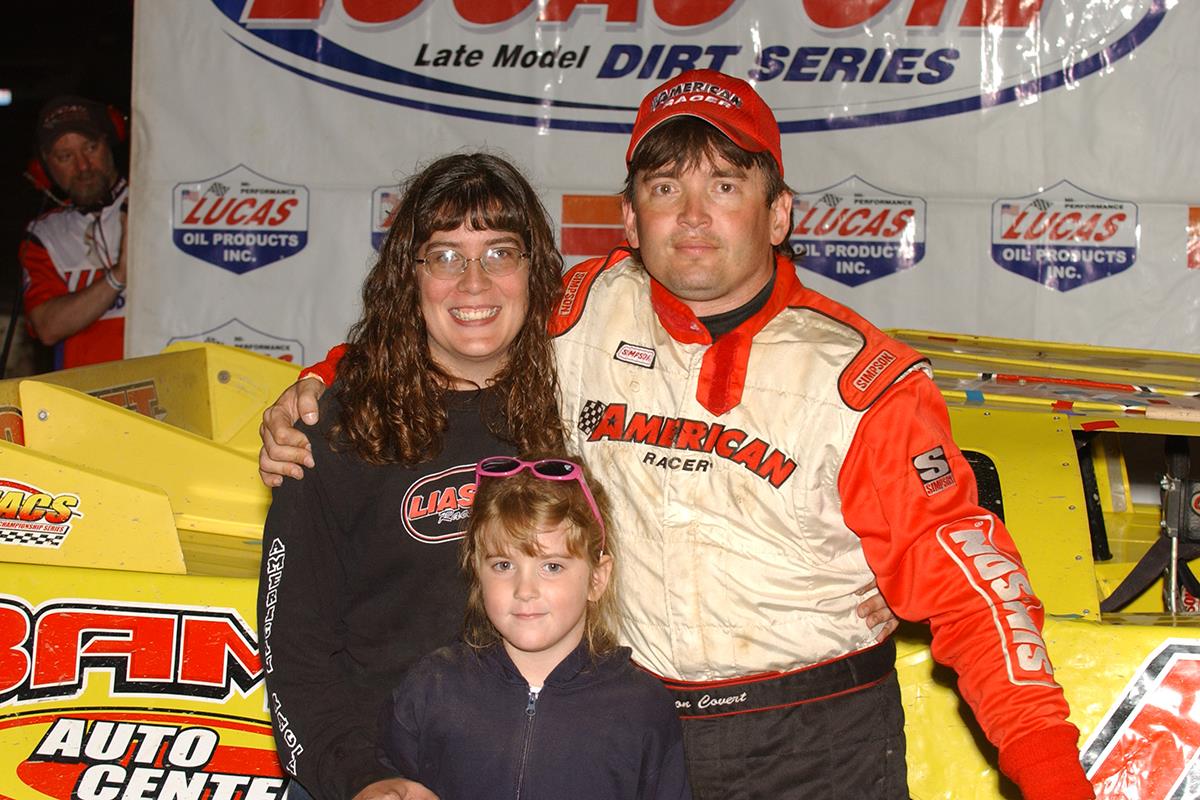 Eric Jacobsen led the first three laps until Covert who started third stormed to the lead. Covert quickly stretched his lead as Jacobsen and Earl Pearson Jr. battled for second for several laps until Pearson passed the #5 machine on lap 13. On the restart, Jacobsen retook second spot from Pearson as a torrid battle resumed for the runnerup spot behind the high flying Covert.

Covert held a commanding lead until the caution came out for Tim Dohm on lap 23. While under caution, the red flag came out as the lights went out in turn two. After an extended break the race went green with Covert again racing unchallenged for the lead with Jacobsen, Josh Richards, Pearson and Steve Casebolt running in the top five.

Richards took second from Jacobsen on lap 23, but Covert had built a huge advantage over Richards and Pearson who climbed to third passing Jacobsen. With heavy traffic in front of him the rest of the way Covert methodically worked his way around several cars putting them a lap down. Covert then cleared his final hurdle as he had a clear race track in front of him with three laps to go as he had done his job in putting several cars between himself and Richards.

Covert then went on to score a convincing win becoming the fifth different driver in five Lucas Oil Late Model Dirt Series appearances at Muskingum County. Richards held off Pearson at the line for second with Jacobsen coming home in fourth followed by the PBM/Erson cams Hard Charger of the Race, Donnie Moran of Dresden, OH who finished fifth after starting in 20th.

In the Lucas Oil Victory Lane for the first time, Covert thanked a multitude of people. “I can’t believe I finally won a Lucas Oil race, I’ve dreamt about this for a long time, the type of drivers who were here tonight, man I don’t know what to say except I wish my dad was here to see this. I want to thank my car owner Barry Klinedinst, my crew, Robbie Allen, American Racer Tires and Rocket Chassis everything was exceptional tonight and thanks to the fans for coming here to watch us race, I don’t race for a living, we don’t get to travel a lot, so that’s why it’s satisfying to win this race here tonight,” said the 38-year old racer who’s car receives sponsorship from Red Wing Shoes, VP Racing Fuels, Bam’s Auto Center, Pre-Mach Inc. Fabricators and Machining Dennis Eberly Building and Remodeling and Kuppy’s Diner.

In preliminary action Josh Richards was the PRC Fast Time in qualifications with a lap of 16.287 seconds among the 43 entrants on hand. Heat race winners were Earl Pearson Jr., Jimmy Owens, Eric Jacobsen and Jason Covert. Kyle Bates and Freddy Smith were B-main winners.