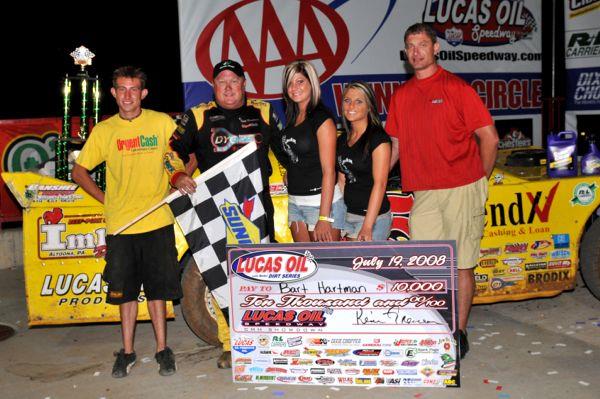 WHEATLAND, MO (July 19, 2008) – It will be a race that everyone in attendance will remember for years to come. There was a huge crowd on hand for the Lucas Oil Late Model Dirt Series “CMH Showdown” Saturday night at Lucas Oil Speedway. Several lead changes, multiple three-wide battles for the lead, and Bart Hartman of Zanesville, OH ending up in victory lane made up one of the most exciting nights in racing to date. The 39-year-old, second generation racer picked up his first LOLMDS win of 2008, and first series win since 2005, which vaulted him into second place in the Lucas Oil Championship Points Standings.

Hartman started from the pole of the 50 lap “CMH Showdown,” alongside PRC Fast Qualifier Dan Schlieper of Sullivan, WI. Schlieper would overtake Hartman at the start with Pearson, Birkhofer and Casey in tow after the initial start was negated as a caution came out for Chris Smyser.

Schlieper held a one-car length lead advantage over Hartman in the early going with Casey on the move, quickly advancing up from his seventh starting spot into the top five with one lap in the books, merely two circuits later he passed Birkhofer for fourth.

Hartman kept pace with Schlieper, following the former World 100 winner closely. Pearson was gaining ground on the frontrunners, and an exciting battle going on in the top five between Casey and Birkhofer who swapped the fourth spot another time on lap six.

Schlieper and Hartman started entering lapped traffic by the tenth circuit, which was just the opportunity that Hartman needed to overhaul Schlieper for the lead on lap ten. Working his way through traffic, Birkhofer would join the fray as he passed Pearson for third and then dove under Schlieper for second on the 11th lap.

Entering turn number one, the leaders went three wide for the top spot with Hartman, Birkhofer and Schlieper battling with the two lapped cars in an incredible display of driving talent. Coming off of turn two Hartman would keep the lead, with Birkhofer hot on his heels. With 15 laps in the books, it looked as if it was a matter of time before Birkhofer would wrestle the lead away from Hartman.

The packed grandstand was buzzing; Hartman and Birkhofer would go door-to-door for two consecutive laps with Casey roaring around the top of the track, passing both Schlieper and Pearson for third on lap 17.

The caution came out for a slowing Scott James with 17 laps recorded. On the restart, Hartman would be in front with a double-file formation behind him. Hartman vaulted away from the field when the green re-appeared with Birkhofer and now Pearson jockeying for second.

With the halfway mark coming up, the action was outstanding as another three-wide race developed for the lead with Hartman, Birkhofer and Pearson dueling it out. Hartman’s car was performing well on the top side, but on lap 28 he jumped the cushion in turn four, allowing Birkhofer an avenue on the inside to go by to take over the lead.

Hartman would fight back on the top side, as he whipped by Birkhofer on lap 30 to regain the top spot. With 20 laps to go, the top three of Hartman, Birkhofer and Pearson continued to put on quite a show with 18th starting Terry Phillips and Casey maintaining a solid fourth and fifth in the running order.

With multiple grooves on the 3/8ths mile track, Pearson hugged the bottom once more and pulled even with Birkhofer, who was working the middle line, for second. After the two ran side-by-side for a remarkable four straight laps, Pearson finally was able to clear Birkhofer for second on lap 36.

With 14 laps to go, Pearson began to close the gap on Hartman, as Hartman jumped the turn four cushion, allowing Pearson to slide by him on the bottom to take the lead for the first time in the race. Pearson then opened up a three-car length lead.

The son of five-time USAC Stock Car Champion, Butch Hartman, rebounded nicely, not giving up on the top line around the track as he rocketed back by Pearson as the two were heading down the back chute to re-gain the lead with ten laps remaining.

Hartman then turned the wick up on his Rocket Monte Carlo, building his lead in the closing laps enough so that Pearson would not be able to make a last-lap run at him. He went on to collect his first Lucas Oil Late Model Dirt Series win since September 24, 2005 at West Virginia Motor Speedway. With the win, Hartman now takes over second place in the Lucas Oil Championship Points Standings, heading into an off weekend for the LOLMDS.

In the Lucas Oil Speedway victory lane, a relieved Hartman, who is following the LOLMDS for the first time was glad to be there after several strong runs this season. “Brian was really tough after the caution, Earl was good on the bottom, we just ran our own race and thanks to Austin (Hargrove, his crew chief) he’s worked his butt off this weekend, the car was super good up top and there’s where it worked the best,” said the former Dirt Track World Champion and North-South 100 winner.

“Thanks to these great fans for coming out here tonight, we hope we put on a show for them, this is by far the best facility I’ve ever raced at, we’ve run good here lately, we wished we could have picked some wins earlier, but there’s a lot of big races left, “ Hartman said after thanking his sponsors; Rocket Chassis, Cornett Engines, Imler’s Poultry, Lendx Check Chasing and Loans, Hoosier Tires, Sunoco Race Fuels, All-Star Performance, Lucas Oil Products and Ohlins.

Second place finisher Earl Pearson Jr. congratulated Hartman on his win in victory lane. “His car was really good up top, the bottom was real good for us there early on when we closed on them guys (Hartman and Birkhofer), but the bottom started to go away and we were just hanging on there, cause he (Hartman) had his car set-up to run up there and we gambled on tires and obviously he picked the right ones.” Pearson was driving the Bobby Labonte Racing/LifeLong Locks/MasterSbilt Dodge Charger.

Brian Birkhofer, who has two LOLMDS wins at Lucas Oil Speedway in the last two years said coming home third was too bad considering the two drivers he was racing against. “Bart deserved the win, I’m glad to see him get one of these (Lucas Oil) races, you can race against him and Earl for lap after lap and they’ll race you clean every time, that one caution killed me on the tires,” said the driver who wheels the J&J Steel/Pro Power Engines/Mars ‘n Hofer Monte Carlo SS.

Terry Phillips, who recorded his 90th career win on the O’Reilly MLRA Series last weekend in Moberly, MO made a valiant run from 18th to finish a solid fourth in his Andy’s Frozen Custard/Hatfield Racing Engines/GRT by Phillips GTO. “This new car has been real good since we started running it, we went with the soft tires and they helped early on, but once we got up into fourth we couldn’t get any further up there, I used them up getting there, but we’ll take fourth against this type of competition.”

Terry Casey, who leads the Quarter Master “Rookie of the Year” chase, continues to impress as he picked up the fifth spot in the Arnie Ranta Motorsports/Pro Power Engines/C.J. Rayburn Monte Carlo. Casey’s top five run at Wheatland marked his fourth top five finishes in the month of July.

In preliminary action at Lucas Oil Speedway, Dan Schlieper was fastest qualifier among the 33 entries in the PRC Time Trials, with a lap of 14.805 seconds. The heat races were won by Schlieper, Brian Birkhofer, Bart Hartman and Earl Pearson Jr. The B-Mains went to David Turner and Terry Phillips.

For more information on the Lucas Oil Late Model Dirt Series, visit us at www.lucasdirt.com or call the series office at (951) 532-2503.