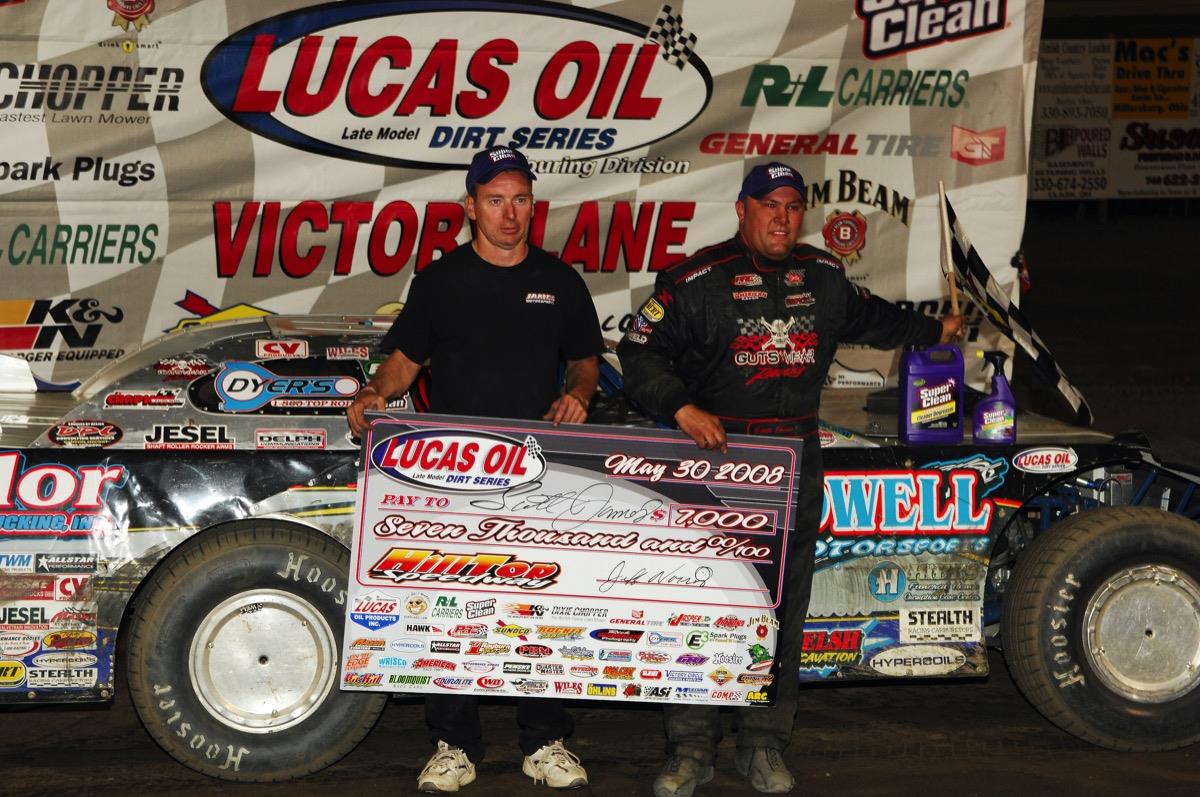 MILLERSBURG, OH (May 30, 2008) – Scott James of Lawrenceburg, IN withstood a race long battle with Matt Miller of Waterville, OH to take his second Lucas Oil Late Model Dirt Series event of 2008 on Friday Night at the Hilltop Speedway. The series was making its first ever appearance at the Jeff Norris facility and produced a 35 lap event for the ages. James earned $7,000 for his fifth career LOLMDS win. Miller finished second followed by Dan Schlieper of Sullivan, WI, Earl Pearson Jr. of Jacksonville, FL and Wooster, OH’s Doug Drown finished fifth

James, who started alongside Miller in the front row of the 35 lap main event took the lead at the start with Miller and defending track champion George Lee running in third. James and Miller started to pull away from the others has they were having quite a race for the lead.

The two frontrunners got behind lapped traffic with only seven laps in the books in the rapidly moving race. James held the lead until Miller went around him in heavy traffic on lap 14. There was one more lap scored when the first caution came out on lap 15 for debris.

On the restart Miller maintained the top spot with James right on his heels. James then used a different line on the race track as he retook the lead from Miller on the 23rd circuit. The top three cars of James, Miller and Schlieper were putting on quite a show in the race for the lead as the laps wound down.

Pearson who started ninth on the grid climbed to fourth at the finish to take over the series championship points standings in the Bobby Labonte Racing/Larry Wallace Engines/MasterSbilt Dodge Charger with Doug Drown leading the local contingent with his fifth place finish in the B.A. Malcuit/Malcuit Racing Engines/Moyer Victory Circle Chassis.

In preliminary racing action, Matt Miller was the fastest qualifier in the PRC Time Trials for the 26 entrants. The heat race winners were Miller, George Lee and Scott James. Steve Casebolt won the B-Main.

The Lucas Oil Late Model Dirt Series will take to the track with a Saturday Night visit to the Florence Speedway in Union, KY for the 22nd Annual Ralph Latham Memorial paying $10,000 to win. For more information you can go to www.florencespeedway.com.