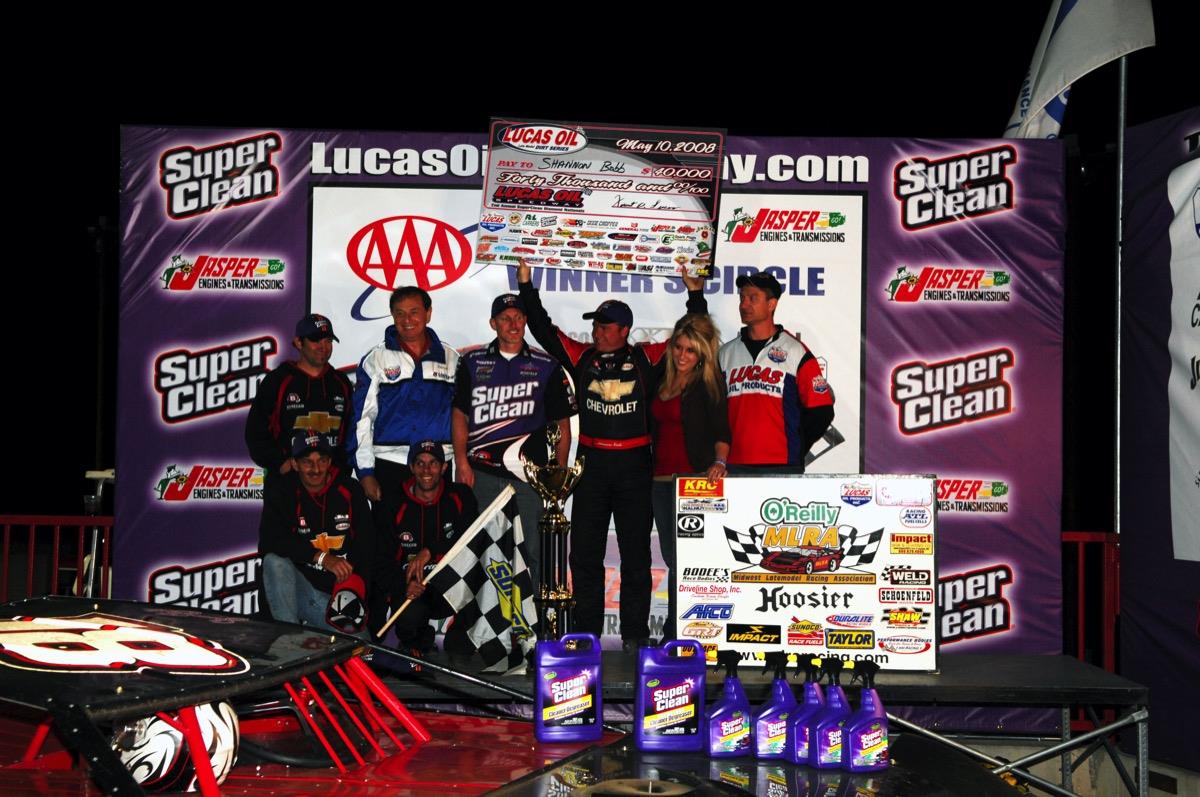 WHEATLAND, MO (May 10, 2008) – Shannon Babb can now add a Diamond Nationals victory and a diamond ring to his already impressive resume as the Mowequa, IL hotshoe led every lap en route to picking up the $40,000 paycheck.

A stellar field of 80 entries was trimmed to 26 for the 100-lap 2nd Annual Super Clean Diamond Nationals with Scott Bloomquist and Shannon Babb leading the field down to the green. Babb immediately showed his strength by powering ahead of the second place battle between Bloomquist, Moyer, and Pearson.

While a rash of early cautions kept Babb at bay, Bloomquist, Moyer, and Pearson swapped the second position back and forth, 20th-starting Steve Francis and 25th-starting Bart Hartman were slowly working their way through the field. Francis ran as high as sixth before falling into the pits and Hartman cracked the top ten before being involved in a lap 39 caution which included Jimmy Mars, Will Vaught, Michael England, and Terry Casey among others.

The restart saw Babb on the point with Pearson, Bloomquist, Scott James, and Moyer in tow. As Babb weaved in and out of lapped traffic, Pearson shadowed his every move until lap 69 when a broken j-bar forced the defending Series champion to slow on the track.

When racing resumed, Babb led Bloomquist, Moyer, Darrell Lanigan, and Jimmy Owens down to the green as Bloomquist slipped high in turn four allowing several cars to pass. Moyer then gave chase to the race-long leader over the closing laps, but was never able to chase down the driver of the Clint Bowyer Motorsports #18.

Babb was the first to cross the stripe in his Clements powered Rocket with Moyer crossing in second, Lanigan third, Owens fourth, and Steve Casebolt fifth.

“I’d just like to thank Clint Bowyer and this whole team for giving me a great race car,” Babb said in victory lane. “It’s awesome to get this win and I’d like to thank Forrest (Lucas) for all he does to make this event possible.”

Upon the conclusion of the race, Series officials reviewed the official score sheets and revised two positions in the final rundown of the track’s original electronic scoring. Darrell Lanigan, who was originally scored one lap down in eighth position, was determined to be on the lead lap, thus revising his finishing position to third place. In addition, John Blankenship was originally scored electronically in 14th place, but was later credited with a 13th place finish after a review of the official score sheets.