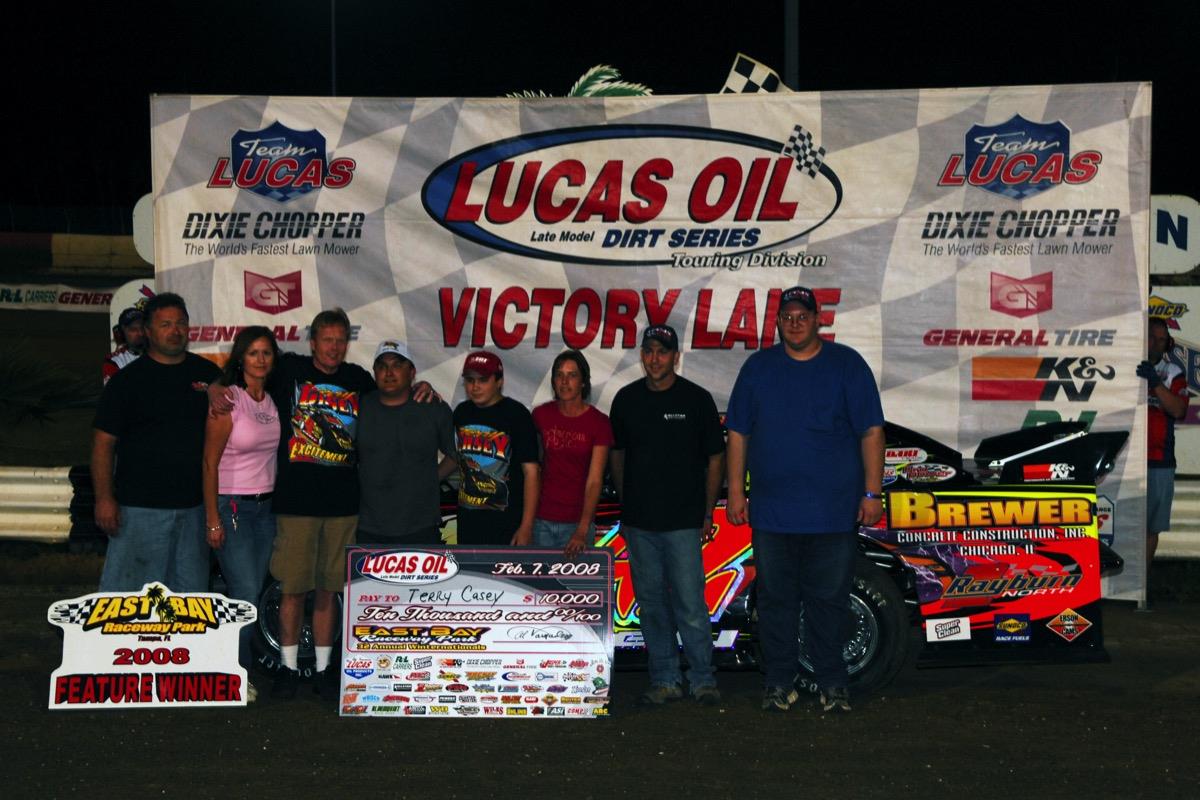 TAMPA, FL (February 7, 2008) –“It’s been a long time coming,” said Terry Casey of New London, WI who won the biggest race of his career on Thursday Night during the 4th night of the 32nd Annual DART Winternationals for the Lucas Oil Late Model Dirt Series at East Bay Raceway Park. Casey who has been coming to the Tampa area facility for the last four years has been close to winning several times in the past at East Bay, but this time he was able to seal the deal for the biggest win of his career. The $10,000 victory came over Billy Moyer, Matt Miller, Steve Casebolt and Josh Richards.

Casey who won the fourth heat, then lucked up and drew the pole for the 40-lap affair and he would start alongside Matt Miller on the front row. On a track that was considerably different than the previous three nights of racing, getting to the front quickly was going would prove to lead to a successful finish.

At the drop of chief starter Julian Mullis’ green flag headed into the first turn, bound and determined he was going to the lead on the opening circuit. Miller would run in second for one lap until Moyer overhauled him by the time the second lap was scored.

The race was going along smoothly until Shannon Babb slowed in turn one bringing out the first caution of the race. On the restart Casey was out in front with Moyer, Miller, Casebolt and Richards hovering in his wake.

On the restart Casey would fire first as the race would go green for six more circuits until the second caution came out on lap 11 for Tim Dohm. Casey had built a three-car length advantage over Moyer when the caution would slow the field.

With Casey still holding down the top spot, the top five would remain the same running order to the halfway point of the race. Casey was continuing to hold his line in the rubber as Moyer and the rest of the drivers were hoping something was going to slow Casey down.

They got their wish, with ten laps to go Casey was closing on the tail end of the field and with passing at a premium, this was the opportunity that the drivers chasing Casey had waited on as Moyer would close right on the rear of Casey’s black number 42 ride.

The race was getting really interesting now, as not only did Moyer close on the leader, Miller and Casebolt were knocking on the door as well; with the top four drivers running nose to tail in traffic with five laps to go.

Moyer showed the nose of his car several of times to Casey’s quarter panel, but a timely third and final caution for Bart Hartman, who would slow for a flat tire and came to a stop on the backstretch that would clear the track for Casey as the field would circulate around leaving Casey a clear path now.

With a five lap shootout ensuing, all Casey had to do was keep his line and hit his marks and he did so. The 38-year old racer would go on to the finish to score the biggest victory of his racing career. Prior to Thursday’s huge win at East Bay Casey had won two $4,000 races.

Moyer crossed the stripe in second with Miller recording yet another top five finish to maintain his points lead in the DART Machinery Winternationals. Casebolt, the reigning Eldora Dream winner, had his best finish of the week coming home fourth as Richards finished fifth for the second night in a row in the Ernie Davis owned #25.

In the Lucas Oil Late Model Dirt Series victory lane Casey was very emotional as he climbed from his race care. “I can’t believe it, I finally won a race here! It’s been my dream to win a Lucas Oil race and we did it!! Man, this is great!” said Casey as he pointed out his wife, engine builder Bill Schlieper, C.J. Rayburn and Arnie Ranta who’ve help him get to this point in his racing career.

“It was the luck of the draw, I saw Matt Miller draw the number two and I just drew and it was the number one and I thought that’s just what I needed after the bad luck I’ve had here in the past and I wanted to win this race so bad.” said the driver who became the fourth different winner in four nights of racing this week at East Bay.

“Without Arnie Ranta I just couldn’t do this, I am a Rayburn North dealer and I get some feedback from those drivers I sell cars to go, but you have to throw out everything you learn down here, because it doesn’t work back home. And what else can I say about the Pro Power Engines, they’re awesome and it’s just a great night,” as Casey went on to thank his wife, who diligently puts her time in working on the car. “She had never been to a race until we were married, I guess she hooked now.”

Casey’s C.J. Rayburn Monte Carlo is powered by a Pro Power Engine from Casey’s home state of Wisconsin and sponsored by Arnie Ranta Motorsports, Brewer Concrete and Construction and Arnie’s Sleds and Trailers.

Racing will continue on Friday Night, February 8th for the 2008 version of the DART Machinery East Bay Winternationals with a $10,000 to win show. The event will be broadcast live via the Internet at www.racetalklive.com.