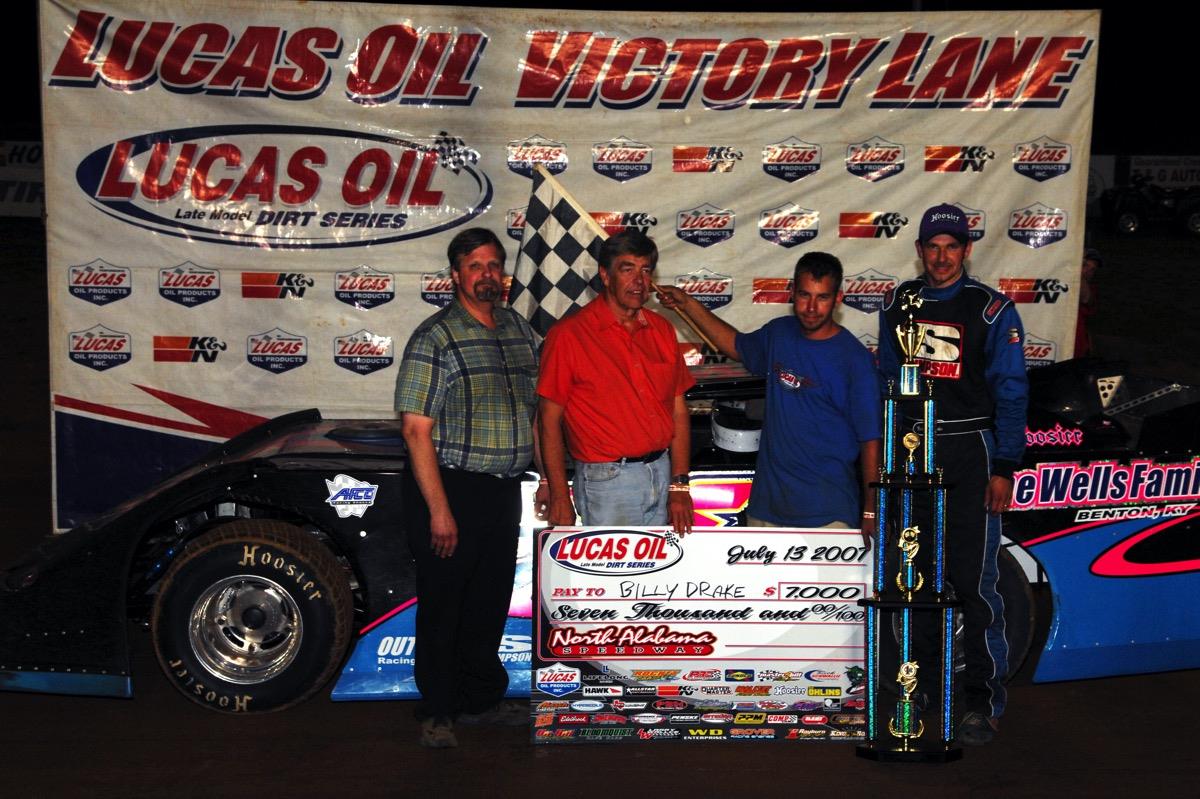 TUSCUMBIA, AL (July 13, 2007)-Billy Drake of Bloomington, IL overcame a three car race for the lead taking the top spot on lap 22 and then pulled away from the field to dominate the last half of the Lucas Oil Late Model Dirt Series event on Friday Night at North Alabama Speedway. The 36-year-old second generation driver earned his first career Lucas Oil Series victory and thus becomes the 15trh different driver to win a series event in 2007 as he picked up $7,000 for winning the “Heart of the Dixie 40.” Scott James finished second to regain the points lead with Dan Schlieper, Earl Pearson, Jr. and Justin Rattliff rounding out the top five.

Eddie Rickman and Scott James would make up the front row for the main event which marked the second ever appearance by the series at the Jeff Greer promoted facility. James would grab the lead at the start with Rickman, Schlieper, Justin Rattliff and Earl Pearson, Jr. gaining top five positions with one lap scored. Schlieper would get by Rickman on lap two as the top five were setting a scorching pace around the 3/8th mile high banked track.

With two laps in the books Chris Wall would bring out the first caution as he made a quick pit stop and re-entered the race on the tail. With the ensuing restart James would maintain his lead for one more circuit until Schlieper overhauled him on lap four to take the point.

The race was going along smoothly until lap seven when a multi car pileup in turn two would bring out the red flag to stop the race. Some of the cars involved included sixth place runner Brad Neat and the series point’s leader heading into the event, Steve Casebolt. Neat would be done for the night and Casebolt would make repairs but not make it back to the lineup shute in time as the green flag came back out as he was not allowed to re-enter the race while it was under green.

Schlieper would keep the lead with Drake now in the thick of things as the two drivers were running very different lines around the race track. Schlieper was on the topside with Drake running the low groove. The two would dice it out running side by side every completed lap with Schlieper holding the advantage at the scoring line.

While all eyes were on the race for the lead, Rattliff and Pearson were having their own private little race for fourth with Rattliff staying in front of Pearson until Pearson was able to slip by him on the low side on lap 16.

The Drake and Schlieper duo then started to enter some traffic by lap 20 and this would allow James to close even further on them. For one lap they went three wide for the lead in some heavy traffic with Drake emerging as the leader on lap 22. As the frontrunners were still racing there way through traffic James would sneak by Schlieper to take over second place on lap 23.

As the race came down to ten laps to go it was all Drake as he was setting a blistering pace lapping several cars. With no more caution flags in sight James did his best to keep Drake within eyesight, but Drake was flawless in the remaining laps as he lapped everyone up to the seventh position.

Drake would race unchallenged to the finish line securing his first career Lucas Oil Late Model Dirt Series win in his first year of traveling full-time with the series. Drake, who started ninth on the grid, now joins Rick Aukland, Tim Dohm, Justin Rattliff and Jeff Smith as drivers who won their first ever Lucas Oil Series event this season. It was the fourth win of the season on the series tour for a MasterSbilt Chassis who had three wins previously this year all by Earl Pearson, Jr.

In victory lane Drake was highly complimentary on the track prep crew and his own crew, which raced their new MasterSbilt Chassis for just the third time. “What a great race track, wow we could race all over this thing. I want to thank my crew, Eric Fulwood, Mark Thoennes and my dad (Steve) for all of their help with the car, you know it was a great race for the lead there early and I thought we might run the whole race like that, but once we got out in front the car performed so well.”

This year Drake had recorded two runner-up finishes before finally breaking though at North Alabama. “It’s great to come to a track like this where you can race all over it, we felt a few times this year we had a car capable of winning but we just couldn’t get that win, now that we have one we’ll keep working for several more. It’s so tough to win on this series with all the strong competition, you have to be on top of your game week in and week out to run up front, but we’re glad to finally get that first win under our belt.”

In preliminary action for the Lucas Oil Late Model Dirt Series at North Alabama Earl Pearson, Jr. took the LifeLong Locks Fast Time Award with a lap of 13.06 seconds among the 35 entries on hand. Scott James, Chris Wall, Justin Rattliff and Eddie Rickman were the winners of the Hawk Brake and Quarter Master heat races. The Mason Racin’ Rebel Shock Dyno and Penske Shocks B-mains went to Johnny Stokes and Bub McCool. The Edelbrock Hard Charger of the Race was Bub McCool who started 18th and finished sixth. The K&N Clean Pass of the Race went to Billy Drake for his pass for the lead on lap 22. Drake also fought through a tough heat race starting seventh and finishing third to earn the ninth starting spot in the feature. The Allstar Performer of the Race was Dan Schlieper.