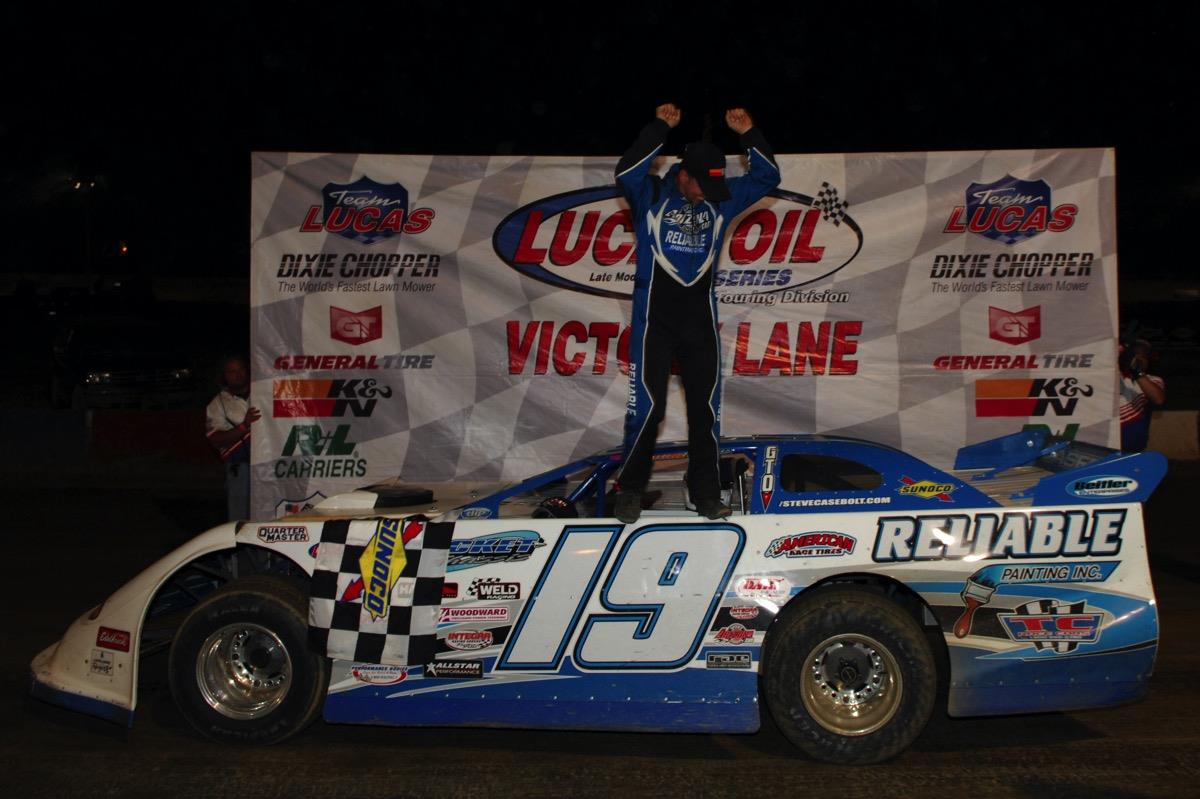 ZANESVILLE, OH (July 3, 2007) - Had there been just one more lap to go, in the “Crenos 50” at Muskingum County Speedway Tuesday night, for the Lucas Oil Late Model Dirt Series, there may have been a different winner in victory lane. Steve Casebolt of Richmond, IN would barely make it to the finish line as he nursed a heavily smoking car to victory. In front of a packed grandstand, Casebolt took his second Lucas Oil Series win of 2007 and closed within 50 points of points leader Earl Pearson, Jr.. The victory was worth $10,000 to Casebolt and car owner Dale Beitler. The remaining top five were Scott James, Justin Rattliff, Pearson and Bart Hartman.

National Dirt Late Model Hall of Famer and LifeLong Locks Fast Qualifier Freddy Smith and leading COMP Cams Rookie of the Year contender Justin Rattliff would make up the front row for the 50 lap main event. Rattliff would take the lead at the drop of the green flag with Casebolt, who started fourth and moved to second on the opening lap. With one lap scored, fifth place, Donnie Moran would slow in turn two when his throttle linkage broke, forcing him to pit and make repairs. Moran would re-enter the race at the restart.

With one lap in the books, Rattliff would set the pace opening up a two to three car length lead over Casebolt, with Pearson running third, followed by Hartman and Smith. The second caution of the race would come out for Jared Hawkins, whose car went over the turn three embankment, forcing the yellow.

At the restart, Rattliff would remain on the point. Ninth place starter Scott James joined the lead pack, passing both Hartman and Smith, on lap eight, taking the fourth position. The third caution came on lap 17, when Josh McGuire came to a halt on the back straightaway. At the restart, Jeremy Miller, who had made his way into the top ten, went over the turn two bank, bringing out a caution period.

With the resulting restart, Rattliff, was feeling the pressure from Casebolt, who was now hounding him for the lead. James had made his way around Pearson for third and was trying to make it a three car race for the lead.

Casebolt pulled even several times with Rattliff during the course of laps 20-25, with Rattliff officially leading those laps but the margin at just half a car length at the scoring line. After starting 20th, and making his way up to tenth place, Davey Johnson brought out the fifth caution on lap 24.

Four laps past the halfway mark, Casebolt would dive underneath Rattliff coming off of turn two and take the lead. Once Casebolt was in front, he pulled away from Rattliff and James who were in a showdown for second place. Rattliff and James would run side by side on occasions with James, leaving Rattliff behind for good on lap 31.

Casebolt would encounter some traffic by lap 35, but James would be unable to close the gap. Meanwhile, Rattliff was in another dogfight for position as Pearson was on the prowl. Those two would go door to door for several circuits while Rattliff maintained the spot.

With seven laps to go, Casebolt’s car started to smoke when he got on the gas down the straight-aways. With less than five laps to go, Casebolt held a sizable lead over James, with several lapped cars between the two. Casebolt’s car started to sound like trouble was near, but he would see the white flag and had built enough of a lead to limp around the track to the finish. On the final lap, Casebolt had enough power left in the motor to take the checkered flag, and come to a stop on the backstretch. Casebolt had to be pushed to the scales for the post race weigh in, and then helped back to the Lucas Oil victory lane.

“I think it was about seven or eight laps to go. Something in the engine let go and I was just a sitting duck”, said the winner, who was about to celebrate his 29th birthday on July 4th. “It was a good thing we had a good lead. We couldn’t have gone an inch further. It’s definitely tore up (the motor). I knew I had a car to win. Justin was tough to get by. He was running good, and I want to thank him for running me clean. You know, it’s good to get this win after winning The Dream. There were some people calling that a fluke or whatever, but we showed them tonight. We are a team to be reckoned with the rest of the season in this Lucas Oil points race.”

James finished second in the Powell Motorsports/Jay Dickens Racing Engines/Rocket GTO. Rattliff was third in the James Rattliff/Rattliff Motors/C.J. Rayburn Monte Carlo with Pearson coming home fourth in the Bobby Labonte Racing/LifeLong Locks/MasterSbilt Charger and Hartman would round out the top five in the Gress Oil/Cornett Racing Engines/Rocket Monte Carlo.

Completing the top ten were: defending Muskingum County Speedway track champion Larry Moran, who earned the Edelbrock Hard Charger of the Race as he took a track provisional and finished sixth after starting 25th. After Moran it was Freddy Smith, Jason Montgomery, Brad Neat and Billy Drake.

In preliminary results, Freddy Smith took the LifeLong Locks Fast Time Award with a time of 17.443 seconds among the 42 entrants on hand. The Hawk Brake and Quarter Master Heat Race winners were: Freddy Smith, Steve Casebolt, Earl Pearson, Jr. and Justin Rattliff. The Mason Racin’ Rebel Shock Dyno and Penske Shocks B-Main winners were: Josh McGuire and Damon Eller. The K&N Clean Pass of the Race award went to Steve Casebolt for his pass of Justin Rattliff for the lead on lap 28. The Allstar Performance Performer of the Race was Freddy Smith, who registered his first career Lucas Oil fast time award, won his heat race and finished seventh in the feature.

The Lucas Oil Late Model Dirt Series visits the Volunteer State of Tennessee for two shows this upcoming weekend. On Friday Night, July 6th it will be the series’ third visit to Tazewell Speedway in Tazewell, TN. Saturday Night, July 7th will be the much anticipated first trip to Volunteer Speedway in Bulls Gap, TN. Both races will pay $10,000 to win and $700 to start. The cameras of SPEED Channel will be on hand at Bulls Gap with the event to be shown on a date and time to be announced at a later date.