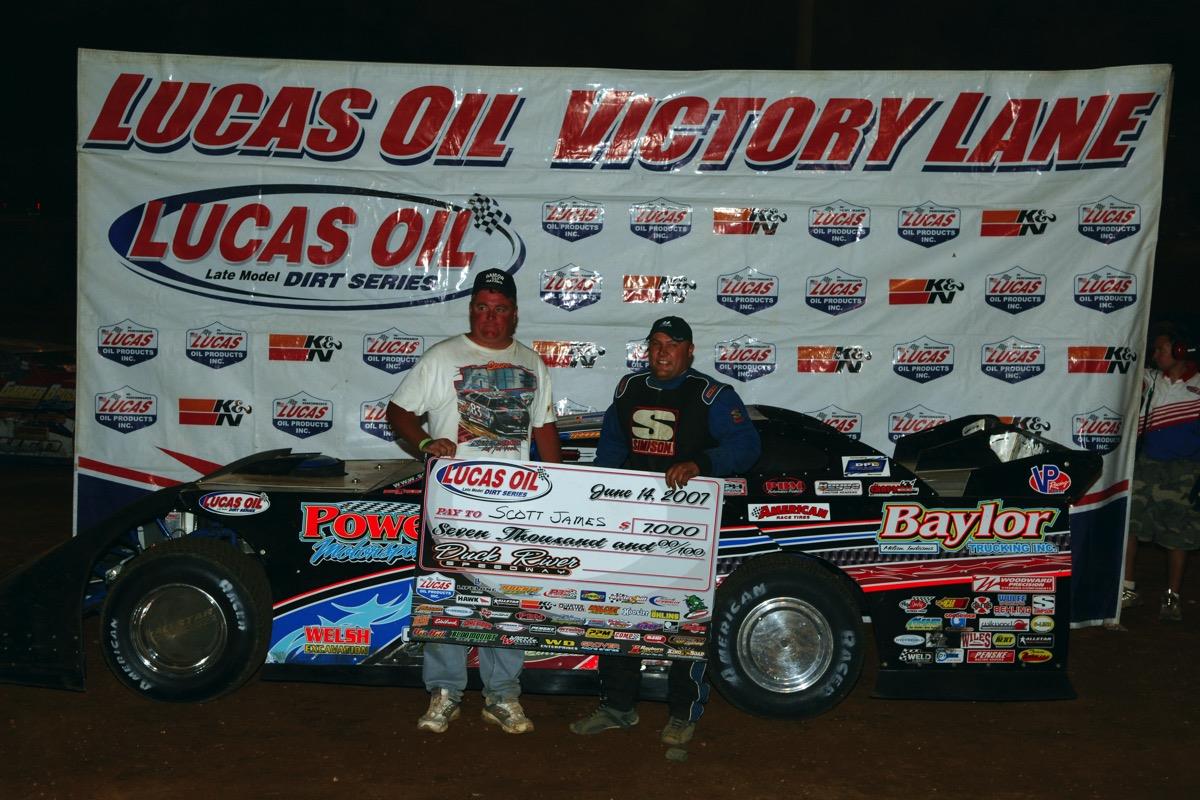 WHEEL, TN (June 14, 2007)-Scott James of Lawrenceburg, IN led every lap of a hard fought Lucas Oil Late Model Dirt Series event on Thursday Night at Duck River Speedway. The series’ first ever visit to the track yielded wire to wire racing action as James had to hold off Billy Drake after a caution with four laps to go that bunched the field up. James earned $7,000 for his second Lucas Oil Late Model Dirt Series victory of ’07 and with the win moved him into second place in the championship point’s standings. The team made the switch to American Racer Tires for the start of the series’ Southern Swing which paid off handsomely as the 35 year old second generation driver outgunned Drake, Dale McDowell, Dan Schlieper and Wendell Wallace for his third career series win.

Drake and James would make up the front row for the 40 lap feature with James gaining the early lead over Drake, Schlieper, Jerry Owens and Terry English. The tight battle around the ¼ mile bullring would see the first caution come out on lap two for leading COMP CAMS “Rookie of the Year” candidate Justin Rattliff who stopped in turn number two. There would be two more cautions after lap three and four were scored that would keep the field bunched up behind James who still held the point.

After the third caution the race settled down with James going to a six car length lead on the pack on the cars behind him that were slicing and dicing around the race track. Schlieper had moved into the second position back on lap five with Drake, English and Owens in the top five running order. With James holding his lead at a steady distance the battle for second would be a classic duel between Schlieper and Drake.

Those two drivers would run side by side on occasion for at least four circuits with Schlieper just nipping Drake at the scoring line. Veteran Skip Arp would move from eighth to the top five as he would put his name in the hat as a possible contender for the win. With 18 laps in the books James was still showing the way with Schlieper, Drake, English, Arp and Dale McDowell all on the same straightaway.

By the 20th lap McDowell had made his way past Arp for fifth just as James was about to enter lapped traffic. Schlieper would then pull within striking distance of James taking the high route around the track, but Drake would keep things interesting as was about to wrestle second from Schlieper using the inside line on lap 27.

The fourth caution of the race for Damon Eller came out on lap 26 and that would only temporarily slow down the intense racing for the lead. On the Delaware double file restart James would maintain his lead with Drake and Schlieper coming on strong again. McDowell then moved into fourth and he began to challenge for second as on a couple of occasions those drivers would go three wide in the race for second place.

By lap 31 Drake was all over James for the lead first trying the low line and then moving back up against the wall. But James was driving a near perfect race as he was keeping Drake at bay. The fifth and final caution would come out on lap 36 for Daniel Miller and this would set up a four lap dash to the finish line.

On the restart James would get off to a great start as his car fired at the cone. Drake again was all over James waiting for a possible mistake to get by him, but in the four breathtaking laps that ensued James would keep his line and not make a mistake as he would drive to the finish line taking a close victory in his first ever appearance at the track. Drake would come home in second followed by McDowell who had gotten by Schlieper with three laps remaining. Schlieper would wind up fourth followed by Wendell Wallace who quietly snuck into the top five at the pay window.

In victory lane James was highly complementary of his American Racer Tires and his Rocket Chassis powered by a Jay Dickens Racing Engine as he thanked the huge crowd of spectators that was on hand for the event. “You couldn’t have written a better script tonight, first time on American Racer Tires and what an awesome tire, we made the mutual decision between everybody on the team to run their tires and it really paid off tonight. We took the Rocket up to the top side and it worked great and the Jay Dickens Racing Engine was just terrific as well.” said James before an appreciative crowd many which had never seen him race before.

“I seen the five to go sign and I knew there might be somebody there who would do slid job or something to get by me, but we just held our line and brought home the win. I want to thank this big crowd for coming out tonight, this is a very racy place and I want to thank the promoters for reworking the track after time trials to make it nice for the drivers and fans.”

Drake’s second place finish was his best of the season with the Lucas Oil Late Model Dirt Series and he thought he had something for James. “I really had a good car there, if it could have stayed green there we thought we had a real good shot at getting by him, but those cautions kind of hurt us. His car was working good up top and mine was working good on the top, bottom and wherever on the race track, it was a good run for us so hopefully we can build on this finish and move up in the points,” said the runner-up finisher afterwards.

In preliminary action Dan Schlieper earned the LifeLong Locks Fast Time Award with a quick lap of 12.633 seconds among the 54 entrants on hand for the event. The Hawk Brake and Quarter Maser sponsored heat races were won by Dan Schlieper, Scott James, Billy Drake and Jerry Owens. The Mason Racin’ Rebel Shock Dyno and Penske Shock B-Main winners were Ray Cook and Todd Morrow. The Edelbrock Hard Charger of the Race was taken by Jesse Lay.