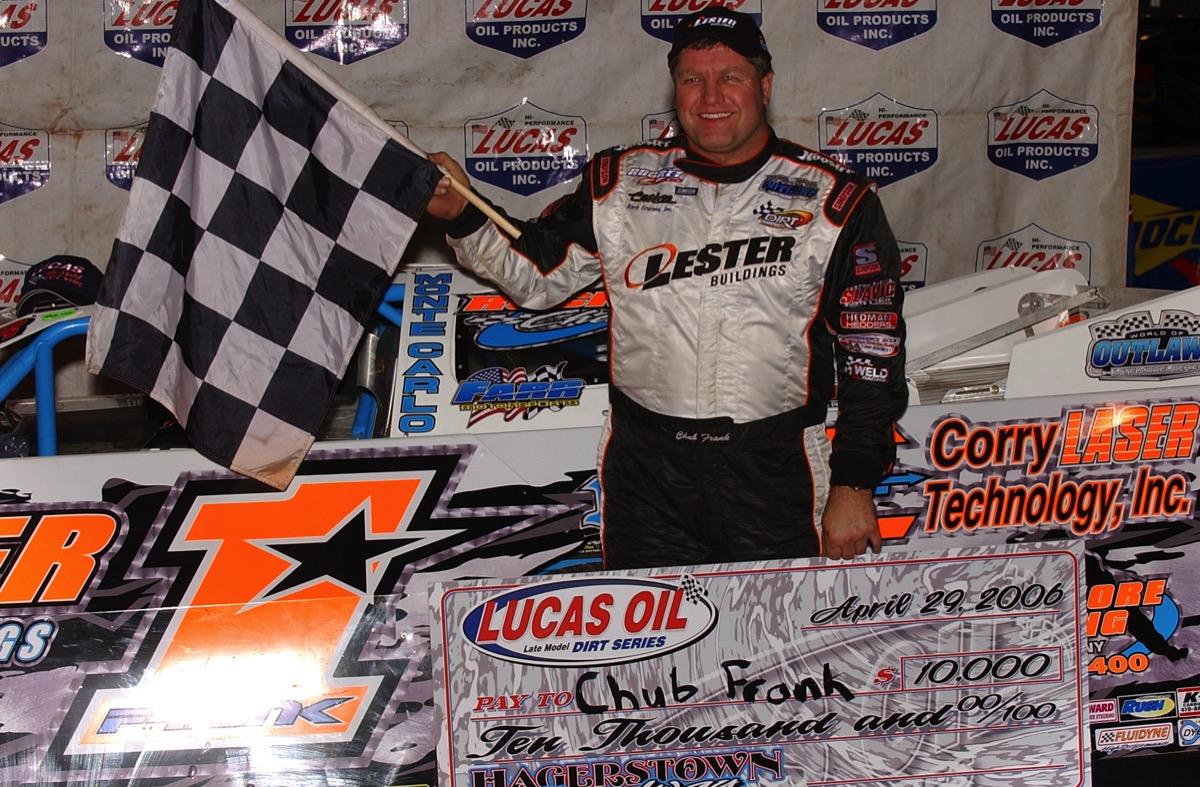 Earl Pearson, Jr. and Chub Frank drew the front row out of the four heat race winners with Frank getting the jump over Pearson heading into turn one at the drop of the green flag. Rick Eckert would quickly move to third in front of Steve Casebolt and Steve Shaver. The race was going along smoothly until a caution on lap five for Damon Eller slowed the race's momentum. On the restart Mike Balzano, who had started tenth bolted up to fourth around both Shaver and Casebolt. Casebolt would have none of it getting back around Balzano two circuits later to recapture fourth.

By lap 12 Frank had set sail and was up to a six car length advantage over Pearson who was still running in second several lengths in front of Eckert. However by lap 16, Pearson had trimmed Frank's lead as he sprinted to just one car length behind making it a much closer margin. Pearson would begin to challenge Frank for the lead as Eckert and Casebolt were starting to close on the two frontrunners. With the race getting the crossed flags at the 25 lap halfway mark it was Frank, Pearson, Eckert, Casebolt and Balzano the top five cars.

One car advancing quietly to the front was all-time Hagerstown Speedway Late Model feature winner, Gary Stuhler, who had started in 11th. Stuhler was able to pass Balzano on lap 27 to take over the fifth slot. At this point of the race Frank had again gotten away from Pearson's sight stretching his lead to a three second advantage over Pearson as the two fought through traffic. With 36 laps in the books Frank had a clear race track as he had negotiated traffic in a timely and efficient manner. Meanwhile Pearson was starting to get attention from Eckert as he had closed on Pearson in the race for second place. Stuhler went around Casebolt to get the fourth slot dropping Casebolt to fifth.

With 15 laps to go Frank had built a sizable lead over the field and had lapped all the way up to the 12th position. But to show it is not over until it's over a third and final caution would wave for Jason Covert who slowed in turn number one with a flat tire on lap 46. The Delaware double file restart would see Frank in front by himself followed by the pairing of Pearson and Eckert with Stuhler and Casebolt side by side behind them on the restart. When the final restart of the race would get the go signal Frank would jump to a three car length lead over Pearson heading off of turn number two.

With two circuits to go Pearson would mount one final charge on "Chubzilla", but Frank was just too strong on this night as he would go on to record his first career Lucas Oil Late Model Dirt Series event. Pearson would finish second and take over the points lead by 25 points over Donnie Moran heading into an off weekend for the series. Eckert finished third followed by Stuhler and Casebolt. "I want to thank all my crew and everyone here, the track was great all night long, the car was a little tight early on and I saw Earl stick his nose in there a couple of times, but it handled real well in traffic and I am pleased to get this win." said the 2004 World 100 winner in victory lane afterwards.

"I also want to especially thank all of my great sponsors including Lester Buildings and everyone associated with them, we couldn't do this without a lot of help from them and everyone else on the car along with the product sponsors we have, they are all a tremendous help with our race team." Completing the top ten were 13th starting, Matt Miller, Donnie Moran, Darren Miller, Mike Balzano and Josh Richards.

In preliminary action Chub Frank was the Comp Cams Fast Timer for the 50 cars on hand wit a lap of 18.856 seconds around the half-mile oval. The PBM Performance Products Heat Races were won by Chub Frank, Rick Eckert, Steve Casebolt and Earl Pearson, Jr. The Mason Racin' Rebel Shock Dyno First B-Main went to Don O'Neal and the Penske Shocks Second B-Main was taken by Nathan Durboraw. The Lucas Oil Late Model Dirt Series will resume its 2006 racing schedule on Saturday Night, May 13th with a visit to the Tazewell Speedway in Tazewell, TN for a $10,000 to win main event.