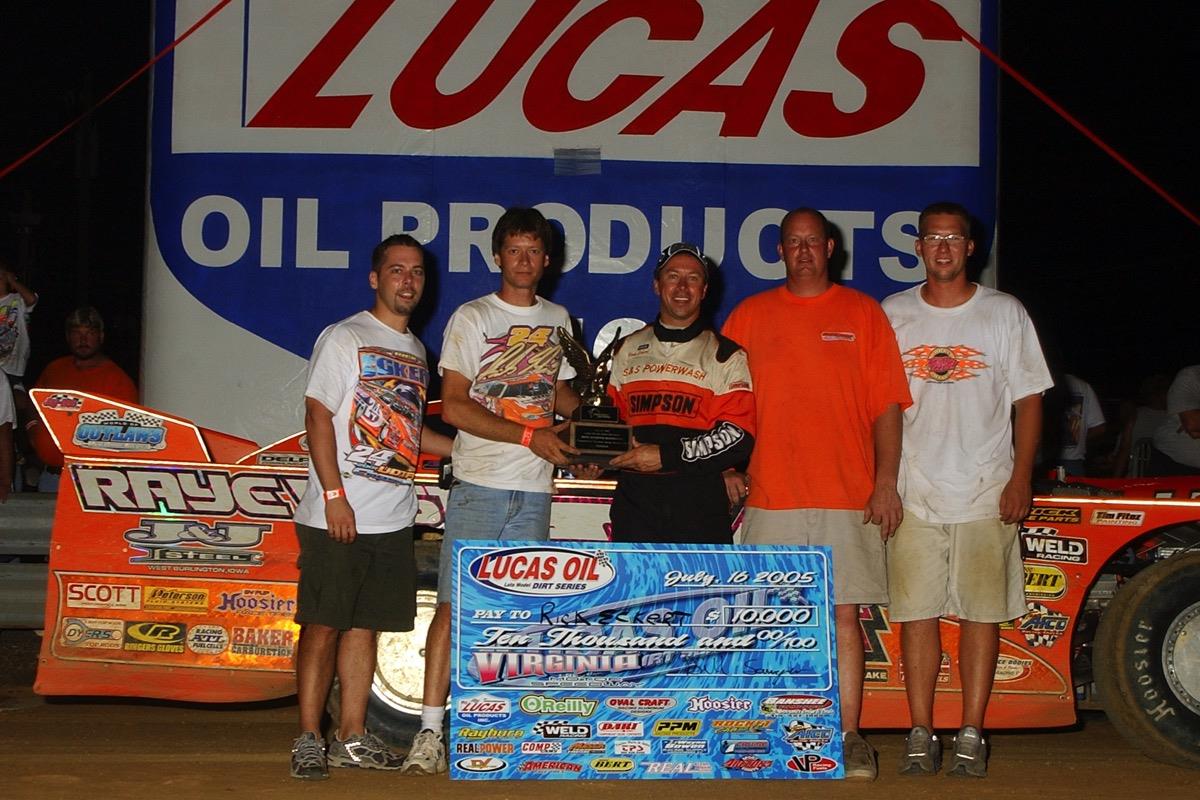 SALUDA, VA (July 16, 2005)-Rick Eckert of York, PA made his first start with the Lucas Oil Late Model Dirt Series since February at East Bay and Saturday Night at Bill Sawyer's Virginia Motor Speedway and came home the winner passing Davey Johnson with just three laps to go to take the $10,000 to win "Dixie Chopper Showdown Presented by Thurston Spring Service" The 39 year old defending Dirt Track World Champion and former Dream Winner came from the fifth starting spot to take his first career Lucas Oil Late Model Dirt Series win as he became the 12th different winner in 20 events this season. Eckert was behind the wheel of the Raye Vest owned/Raye Vest Excavating/J&J Steel/Hoosier Tires/Cornett Racing Engines/Rocket Ford Taurus. Donnie Moran of Dresden, OH finished second after an eventful night. Moran set fast time for the night then went to a backup car for the main event and started 22nd. He worked his way through the field to finish second right on Eckert at the checkers. Moran was driving his PBM Performance Products/SMS/MasterSbilt Monte Carlo. Third went to Davey Johnson of Greensburg, PA in the Dale Beitler Racing/Reliable Painting/Rocket Grand Prix. Fourth place was Matt Miller of Waterville, OH in the Dirt Shop, Inc/McCullough Industries/Rocket Grand Prix and Ricky Elliott of Seaford, DE was fifth in the BSW Construction/Pro Power/Rocket Grand Prix. The event was taped for broadcast on ESPN2 and will shown on Sunday, July 31st at 1 p.m. eastern time.

Ricky Elliott grabbed the point at the start of the 50 lap main event with Davey Johnson and Matt Miller trailing. This was the second time the race was started because a multi car pileup in turn two on the start brought out the red flag to clear the track. Earl Pearson, Jr. would get by Miller to take third a lap later. Elliott would quickly start to pull away from Johnson as the cars were running a rapid pace around the 1/2 mile dirt track. With five laps in the books Elliott was showing the way with Johnson holding second followed by Pearson, Miller and fifth place starter, Rick Eckert. Don O'Neal would suffer a flat tire and bring out the caution with five laps scored. O'Neal who went to a back up car and started in 23rd restarted on the tail. When the race resumed it would continue to be all Elliott as the first year dirt late model driver was a rocketship pounding the cushion in the corners and again building his lead over Johnson to four car lengths. A caution on lap 14 for a stalled Terry Harris would close the field up on the restart. Elliott would maintain his lead with a change for position in the top five as Eckert and Booper Bare would go by Miller after Miller jumped the cushion in turn two. Then Elliott would suffer the same fate as he would jump the fourth turn cushion allowing both Johnson and Pearson the get by. Pearson then started to challenge Johnson for the lead with Elliott close by. Eckert and Bare were quietly making their way to the front as well.

With Johnson and Pearson battling for the lead, Eckert would pass Elliott for third on lap 24. At the halfway mark it was Johnson showing the way with Pearson all over him for the lead with Eckert, Elliott and Bare in the top five. A lap past the halfway mark Eckert would zoom by Pearson to take the runner-up slot. Eckert then would dive into the turns pulling alongside Johnson in the race for the lead. The race for the lead would be slowed on lap 33 when a caution for debris would come out on the track. On the restart with 16 laps remaining a multi car wreck would take place in turn two bringing out another yellow. The race would go green for three circuits until Freddy Smith slowed with a flat tire. With 11 laps to go Johnson was still hanging on to the lead with Eckert in second and Elliott now back into third as he was by Pearson for that spot. On lap 41 Bare would spin in turn four bringing out the caution flag and Scott James who was running in seventh made slight contact with Bare which broke something in the left front suspension of his race car putting him out of the race.

That would be the final caution of the race and set up a mad dash to the finish between Johnson and Eckert. With five laps left Eckert was all over Johnson as the two ran side by side down the straight-aways. But soon the duo would have company up front as Donnie Moran, who started 22nd after having to go to a backup car after his heat race was flying through the field and just has he has done several times on the ESPN2 programs he was a threat at the end to take the win. With the five to go signal given Johnson, Eckert and Moran were right together and with the fans on their feet for the final five circuits coming off of turn number four on lap 47 Eckert would get real close to Johnson as the two would drift up against the wall with Eckert squeezing by Johnson to take the lead. Moran then saw and opportunity as he was hounding Johnson for second he would fly by him as the cars took the white flag. Moran then tried to drive harder into turn three than Ecker, but Eckert was up to the challenge and would lead Moran to the finish line winning by just one car length for his first ever Lucas Oil Late Model Dirt Series win. Johnson would finish third followed by Miller and Elliott.

"The track was real good tonight," said the winner afterwards. "This is just an awesome facility and hope the fans enjoyed that race." "You could pass tonight and I just held my own there in the top five for while until I decided to get going after some of the double file restarts, I just want to thank my car owner, Raye Vest and the entire crew for their great help."

In preliminary events Donnie Moran was the Fast Qualifier for the 23 entrants on hand with a lap of 17:884 seconds. The Heat Races were won by Ricky Elliott, Matt Miller and Davey Johnson.

The Lucas Oil Late Model Dirt Series will be back in action this Friday and Saturday, July 22 and 23 in the Mountaineer State of West Virginia. On Friday Night the series will appear for the first time at the Elkins Speedway in Elkins, WV for a $7,000 to win show and then on Saturday Night the series will race at the Tyler County Speedway in Middlebourne, WV for another $7,000 to win race.