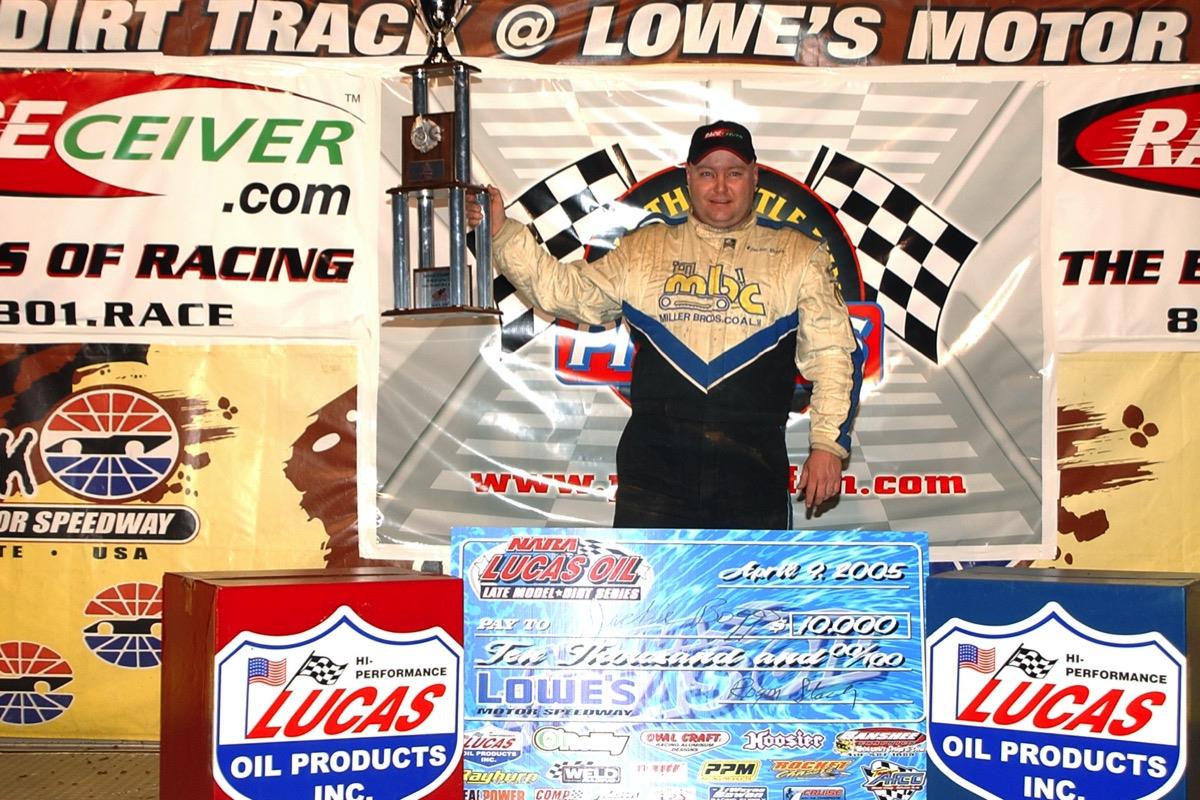 The 40 lap main event would go green with polesitter Freddy Smith grabbing the initial lead of the lead. The North Carolina native was looking for his first win at Lowe's as he would lead the first three circuits of the race. Scott James would zoom from his fourth starting slot to challenge Smith for the lead on the very first lap with Jeff Cooke holding down third followed by Steve Lucas. An accident of the front stretch would bring out the first caution of the race on lap four when the coil failed on Don O'Neal's car causing him to slow and then rear ended by Michael England ending both drivers night. On the restart James would gain the advantage on Smith passing him for the point on lap four, Lucas then got in going screaming from fourth to second on the same lap and then overhauling James for the lead on the fifth circuit. Lucas and James would then start to pull away from the field until the next caution flew on lap seven. On that restart James would bolt past Lucas and retake the lead with positions being contested throughout the field at this point of the race. Matt Miller would make his presence known by the eighth lap coming to second from sixth, but a flat tire under a caution would force him to pit for a tire change. Miller would make it back out before the race went green again. The exciting battle for the lead would go hammer down again with James, Lucas, Cooke, Jackie Boggs and Earl Pearson, Jr. who was up from 20th to the top five.

James would continue to lead the race until Lucas would race him to take over the lead on lap 15 dropping James to second with Pearson now up to third. A lap later James would see a wheel break taking him to the pits for repairs. Pearson then on the on the restart went around Lucas to take over the lead with Lucas, Boggs, Miller and Chris Madden your top five at the halfway mark of the race. Madden would go by both Boggs and Miller on lap 21 to move into third place. Up front Pearson appeared to be in complete control of the race now with Lucas holding down second place, but Lucas would suffer a flat tire on the 24th lap forcing him to stop bringing out a caution flag. Madden then would pick up the challenge of racing for the lead with Pearson. Madden stayed with Pearson for three laps until another caution for Chuck Southard's smoking car slowed the action. On the restart Miller would gain an advantage passing Madden for second and the whipping around Pearson for the lead a lap later. But Pearson would fight back retaking the point with ten laps remaining in the race.

In the final ten laps it would get really wild with Pearson, Miller, Boggs, Madden and Shane Tankersley all in the hunt for the win in front of the camera's of ESPN2 who was taping the race for a later broadcast. With 32 laps in the books and coming off of a caution flag Miller and Pearson would restart side by side and race hard into turn number one with Pearson getting caught on the outside and slamming into the turn one concrete wall ending his night after such a strong effort. Miller would then lose his lead on the final restart after Pearson's car was removed from the track as Boggs would gain the top spot roaring by Miller as Miller would slip in turn two not only did Boggs go by him but Madden, Donnie Moran and Tankersley would push Miller back to fifth place. Boggs would then be buoyed by his move and he would go on to take an exciting win holding off Madden down the stretch for his first ever Lucas Oil Late Model Dirt Series and Lowe's victory.

"After last year's misfortune here, it's great to come back here and win this one," said Boggs in victory circle. Boggs was speaking of last year when he ended up in the catch fence outside the track and suffered a foot injury following an accident. "I turned the wick up there at the end and it really came together for us, Earl Pearson, Jr. had the fastest car out there, but we just kept plugging away holding our own until we needed to go for the lead."

In preliminary events for the 43 cars on hand Petey Ivey, Freddy Smith, Scott James and Jeff Cooke won the Heat Races. The First B-Main went to Ricky Weeks and the second B-Main winner was Chris Madden.

The next Lucas Oil Late Model Dirt Series event will take place this Saturday Night, April 16 at the legendary Brownstown Speedway in Brownstown, IN. The 22nd Annual "Hoosier Dirt Classic" will be on tap with a purse of $7,000 to win and $500 to start on the line. For more information please go towww.brownstownspeedway.com.