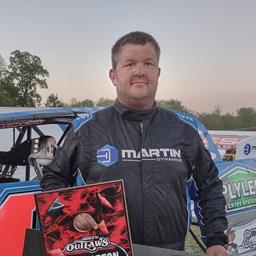 Waterford, PA is home to Dave Hess Jr.,
his wife Becca, and their children Jaxon,
age 7, and Aubree, age 5. Dave started
his racing career at the age of 15 and
over the years, his commitment to
racing and driving ability have won him
numerous racing titles and awards.
Since 2002, his rookie season in the
Super Late Model division, Dave has won
116 races, including 2 World of Outlaw
Series events, 10 United Late Model
Series events, 1 Ultimate Super Late Model Series event, 1 Independent Racing Series event, 1 UFO Series event, and 1 O’Reilly AllStars event. Dave has also accumulated 11 track championships to add to his resume since 2002.